So here's a deep mystery. It's the spring of 1987. I'd been reading comics for a couple of years, and as I've mentioned ad nauseam already, I was a big time Avengers fan. I was also about a year into my decades long X-Men obsession.

So why, pray tell, do I only have the first two issues of this 4 issue mini-series?

Like I said...a mystery for the ages, but let's try to break it down anyway.

Was it the creative team? I don't think so, as this is written by Roger Stern. He was the only ongoing Avengers writer I knew up to his point, as his run predated my first issues. It's drawn by Marc Silvestri, and while he was not a bankable name just yet, he still drew a nice looking comic.

Was it the X-Men? I don't think it was their fault either. This team has far too much good going for it than bad. Between mohawk Storm, brown and yellow Wolverine, pre-Gambit Rogue, reformed Magneto, and Havok's hypnotic costume...I couldn't be happier. Well I suppose I could if Nightcrawler and Kitty were still around, but I already talked about their absence over here.

Was it the Avengers? We actually may be on to something here, as the Avengers were in a bit of decline at this point. This period in time is when Stern is nearing the end of his run, leading to Walter Simonson's ill-fated team. While we have Cap and She-Hulk (who always brightens up whatever team she's on), we also have armored Thor and Dr. Druid. Yikes! Captain Marvel and Black Knight round out the team, and while they're both great c-listers, they need more than just other c-listers to interact with to make the team interesting.

I suppose all that's left to do now is to read the actual book and find out.

Uneasy Allies
Thank god for pre-90's comics, as the first page gives me everything I need to get me up to speed on what happened in the first issue. Long story short...Magneto's old base of operations, the recently destroyed Asteroid M, is crashing back to earth. Magneto is wanted for crimes related to his sinking a Russian sub in his pre-reformed days, so the international community sets a trap to catch him as he tries to salvage his old base from falling into the wrong hands. 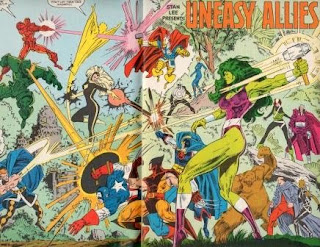 We enter the story in the middle of a classic Mexican standoff, with Magneto in the middle. The Avengers want to bring Magneto in for a fair trial, the X-Men are backing up one of their own, and the Soviet Super-Soldiers want Magneto in Russian custody.

Needless to say, a brawl ensues. 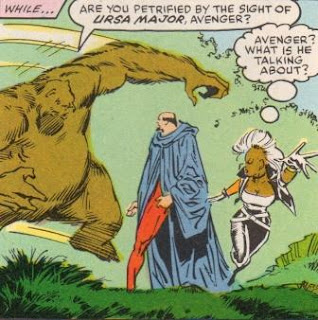 That's right Ororo, somehow this character made the cut.
The X-Men prove more wily than their foes, and make off with Magneto in tow. Dazzler absorbs all of the ambient jungle noise and blinds everyone by turning it into a burst of brilliant light, covering their escape. 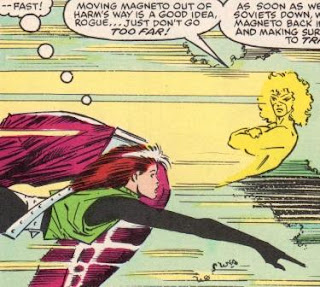 They did seem to forget, however, that one of the Avengers can transform herself into pure light. That's a little like trying to stop Aquaman by summoning a tsunami.

Captain Marvel gets more than her fair share of ridicule, but I for one dig her signature flying formation. It's practically oozing with condescention.

She continues to keep tabs on the X-Men, while the Avengers take the time to put the Soviet Super-Soldiers in their place.

Meanwhile, Magneto isn't making any headway into getting the X-Men to trust him more as he rushes off alone to salvage Asteroid M.

Once there, Magneto finds some intact memory chips and circuits...oh yeah, and his old bucket helmet. Trust me on this one Magneto, putting that old helmet on is not really going to help any of the three teams trying to catch you to trust you. 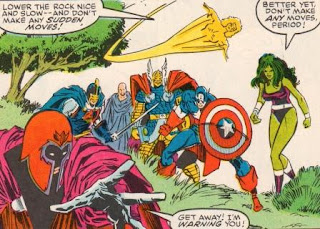 But put it on he does, right in time for the Avengers to come upon him. Of course, the Avengers fear that he's up to no good and don't realize that he's actually trying to stop his old technology from falling into the wrong hands. They barely have a chance to take him down before the X-Men are once again on the scene.

We now get a true X-Men vs. Avengers fight without those pesky Russians.

Blade versus blade, as Wolverine takes on the Black Knight.

Brawn versus brawn, as She-Hulk takes on the Rogue. 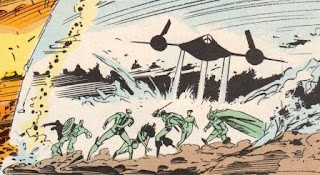 The battle appears to be a draw, when the explosives that Magneto lined the asteroid with go off. Magneto proves he's actually one of the good guys by protecting both teams from the full front of the blast. Granted, he knows which side his bread is buttered on as the Avengers are all left unconscious from the explosion while the X-Men make their escape in the Blackbird.

Proving that I've been too hard on him, Dr. Druid is the only Avenger to come out on top, as he stows away on the escaping blackbird jet while mentally masking his presence from the X-Men.

I'm no closer now, after having read this issue, to realizing why I never bothered to pick up the rest of this mini-series. I rather enjoyed this issue. So much so, that I'm going to have to go back-issue hunting for the last two parts.

It wasn't good like Watchmen is good, this was more like a rediscovery of a lost tale from a period of X-Men history that makes me happy. It's like one of those hyped-up DVD extras that is actually entertaining! The art by Marc Silvestri makes it seem even more so, as he would start pencilling his vaunted Uncanny X-Men shortly after this series wrapped.

This is another one of those type of books that make doing this blog so much fun. The fact that the Randomizer has chosen it hot on the heels of the big X-men/Avengers crossover that just recently wrapped with the resurgence of Asteroid M is just icing on the cake.

I look forward to seeing what the Randomizer has in store for me next.

Related links for your surfing pleasure...
Posted by TomO. at 1:53 PM