Garth Ennis is another creator that I've followed a lot over the years. I may not always stay with his series, but they're usually worth checking out anyways.

The first title that I remember reading from him was Hellblazer. I was never that into the character before his run started, and I forget just why I decided to pick it up. His and Will Simpson's run ended up being something really special. I stayed with the title after Ennis moved on, followed by Warren Ellis and then Brian Azzarello, but neither of them were able to top what Ennis had done and I soon moved on.

About halfway through his Hellblazer run, he started to write The Demon. I'd never really been a big fan of that character either, but it was Ennis so it couldn't be that bad. This title was my first exposure to the work of John McCrea, but The Demon wasn't my thing. Luckily for me, I did stick around long enough to pick up the Bloodlines Annual that introduced the character of Tommy Monaghan, the Hitman.

It only took 2 1/2 years, but DC followed that up with a Hitman title that was 60 issues of pure-madcap violence and dark humor, firmly set in the DC Universe. After sitting down and re-reading this title, it made me realize just how much I miss it. I know they say that you can't go home again, but I almost wish Ennis would give it a shot.

Ennis gets a bad rap that he hates super-heroes, but I don't really think about it like that. I think that he has fun at their expense, but I don't know if I'd say he hates them. Or at least at this point in his career it didn't seem that way. I only read the first half a dozen issues of The Boys, and I've heard it's only gotten more outrageous and over-the-top since I dropped it.

Well enough of my yakking, let's read this thing...

What we have in this issue, is essentially two separate stories happening that don't appear to have too much in common right off the bat. There is a reason for it though, that becomes clearer as this three part storyline continues.

This issue opens up with Sean Noonan telling a story from his youth. Sean is the father figure for Tommy Monaghan, as well as the owner of the bar where they all hang out. It's in this bar that Sean relates the story of how he ran away from home and ended up in World War II London, all when he was only seven years old. 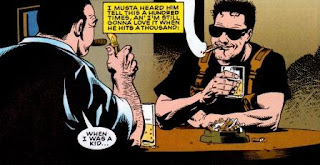 Escaping the abuse of a drunken father, Sean jumps aboard a lifeboat to sleep and wakes up at sea on the armed merchant cruiser, H.M.S. Jervis Bay. 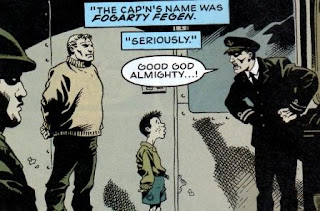 Aboard this ship, he comes under the guardianship of a sailor by the name of Carey. He is charged to look after Sean until they get to London, as the captain doesn't want anything to do with him.

They spend a week at sea, as Sean lives every young boys wish for adventure on the high seas. It's only when the dream becomes reality, does Sean realize the trouble he's actually in.

A ship is spotted on the horizon, which is at first mistaken for a friendly battleship. It's soon clear, however, that what is coming toward them is the German battleship Admiral Scheer. Clocking in at over ten thousand tons and massive gun ports, she's more than the little Jervis Bay can handle.

The captain then does something that happens quite a bit in Garth Ennis books...he does his job. Even when the odds are stacked way against him, he sucks it up and charges forward to carry out the responsibilities that were handed to him. Ennis definitely likes his characters that are too stubborn to know when they are in over their head. It's an admirable trait, as Ennis writes it, and I find myself drawn to characters that would otherwise be jackasses at best. 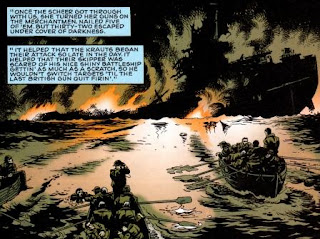 Carey throws the young Sean into a lifeboat as the Jervis Bay is getting pounded and splintered apart. The captain dies trying to redirect his guns toward the Admiral Scheer. Panicking, Sean asks if anyone has seen Carey. An injured sailor points back to the Jervis Bay, with Carey now up on the gun turret firing away as the ship sinks into the ocean.

Back at the bar, Sean explains that he spent the next five years in a British orphanage until the war was over. When he did make it back to the states, he took his Louisville slugger and broke every bone in his dad's body. As he put it, "He never bothered me an' Ma again." 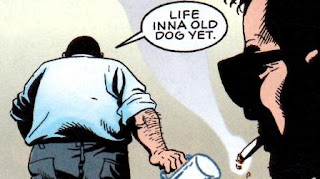 Tommy volunteers to get another round of drinks, but Sean won't hear of it. In a small bit of foreshadowing of what's to come, he walks away saying there's "Life inna old dog yet."

The book then shifts to a lavish mansion on the outskirts of Gotham. There, a young Italian heiress is overjoyed at the arrival of her uncle. It seems Isabella is to be married, and she has summoned Uncle Benito to do her a favor on her wedding day.

We find out that her Grandpa was "Men's Room" Louie Feretti, and that she wrongly believes that Tommy is responsible for his death.

Uncle Benito is surprised to find out that Tommy Monaghan still breaths, as Isabella has one small request for her wedding present...the death of Hitman.

Back in Gotham, Tommy and his pal Natt are leaving the bar when they run into Tommy's ex-girlfriend, Tiegel. Tommy calls out to her, but she is obviously not quite as happy about their chance encounter as he is. She kicks him in the groin and continues on her way. 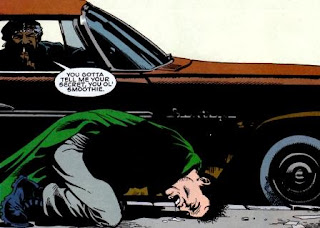 Natt, ever the true friend, is more than sympathetic to Tommy's current predicament.

Three days later, Tommy tries again and actually manages to get Tiegel to listen to him as he tries to apologize for cheating on her. 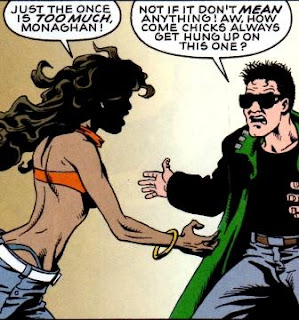 Somehow I don't think that's going to be quite the apology she was expecting. As they continue arguing, Tommy is surprised from behind as Uncle Benito steps up and plunges a knife into his back. To be continued...

As I mentioned before, we re-learned just what a great little comic book this was. It played to Garth Ennis' strengths, and let him write a character that had the whole of the DC Universe to play off of, while at the same time letting him write his story without having to tie into the massive continuity of it all.

Garth Ennis has sort of carved out a little niche for himself within the war story genre. In fact, I think he's the only one writing war stories on a consistant basis these days. You can tell the obvious affection that he holds the genre in, as he would sneak them into his other work on a semi-regular basis. There's at least two war stories in Hitman, as well as one in Preacher. I don't remember any from his Hellblazer run, but it wouldn't surprise me.

This story arc is all about the relationships of father's and their children, and the responsibilities that come along with it. It's a theme that works well with Ennis' characters and plot lines. I remember this being one of my favorite arcs, but it's heartbreaking as it ends with the death of a major character, but it's well told and definitely worth the effort.

All in all, this book hasn't missed a beat in the past nine years. It's not dated in the slightest, and still reads just as good now as it did then. If there's anybody out there who has a Garth Ennis book or two, but has never picked up an issue of Hitman, you owe it to yourself to sample a couple of issues as this is some of Garth Ennis at his best. Take a chance on any issue you can find, as I don't remember there being a stinker in the entire 60 issue run. Hell, even the DC 1,000,000 tie-in was entertaining.

All characters and artwork reproduced are (C) DC Comics.