2005 was a good year for comics, or at least it was if you were a DC fan. Things started out especially strong at the beginning of the year with the Countdown to Infinite Crisis one-shot. It was an oversized jam-issue that set the stage for the next two years worth of stories spinning out of the DCU. It's known mostly for featuring the death of the Blue Beetle at the hands of his one-time ally Max Lord. This book is a textbook example of how to set the stage for a line-wide crossover, but the amazing thing about it is that it did so while telling a very effective and heartwrenching character piece.

Their was then four titles that spun out of that book, and the one that carried on most directly from the shocking ending was The OMAC Project. Picking up immediately after the assination of Ted Kord, it tells the rise and fall of Max Lord. He has taken over command of Checkmate, and has hijacked Batman's high-tech Brother Eye satellite. With both of those resources at his command, and the secret army of OMAC's that he has constructed ready to go, he wants what any super-villain wants...world domination.

Still with me? I told you before that there was a lot of continuity involved around this issue. Let's keep going, as we'll get caught up eventually.

Stepping up to put a stop to his plans are Sasha Bordeaux, his former Black Knight in Checkmate, and Batman. Sasha is working from within Checkmate, trying to rebuild the organization after he has nearly destroyed it. Batman, meanwhile, is working on the outside trying to find a way to regain control of the Brother Eye satellite. Together, they are working to put an end to the OMAC threat that Max Lord has unleashed upon the world.

That pretty much brings us up to speed with this issue, except for one small plot point. You see, by this point in the story Max Lord is dead, killed at the hands of Wonder Woman. Now there are two reasons why this was a big deal. Obviously, anytime a major hero kills someone it's a big deal. In this situation, Wonder Woman felt she had no choice as Superman was running rampant under Max Lord's mental control.

The bigger contraversy at the time, however, was how DC pulled it off. Within this supposedly "self-contained" mini-series was a four part crossover called "Sacrifice" that took place across the three Superman titles at the time and Wonder Woman's book. It was here that major antagonist of The OMAC Project, Max Lord, was killed by Wonder Woman. DC caught a lot of flak at the time for "forcing" people to by more issues to get the whole story. It was a well deserved complaint, and distracted from the actual story that Greg Rucka was telling.

So with all of that going on, let's get to the actual issue...


Before we get into the actual issue, let's take one more small detour to admire the cover by Ladronn. He supplied the covers for the entire series and all of them are fantastic. We are lucky enough to have the best of the bunch with this issue. An army of OMAC's rising into the sky, with Batman in hand-to-hand combat engaging one of the OMAC's. It's a truly stunning cover that is beautifully rendered and colored. I'll take a Ladronn cover over just about any other cover artist any day of the week.

I'm also going to guess that Greg Rucka has a Latin dictionary on his desk somewhere, as "Animus Autonomous" is emblazoned on the cover and just last week his debut issue of Detective Comics was released with a story called "Elegy Agitato"!

Back to the issue, it opens up with the Brother Eye satellite in space giving the command to activate all 1.3 million OMAC's that Max Lord created during his time at Checkmate. The OMAC's are regular people that have been infected with nanobytes, that when activated, turns them into autonomous killing machines. 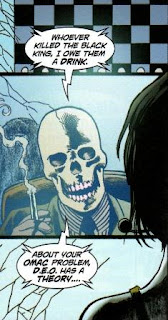 Sasha and Batman work their contacts to bring in reinforcements. Sasha sends out an open call to all Checkmate sleeper agents, with Director Bones of the D.E.O. coming back with a two-pronged plan of attack. The first part involves introducing a virus into Brother Eye's communication network, while the other invovles a massive electromagnetic pulse.

Batman deduces that that was why Ted Kord was ultimately killed, as he had designed a prototype EMP weapon that Max Lord knew could affect his OMAC's. In the midst of trying to steal it, the job got botched and the Blue Beetle was killed as a result. Needless to say, Batman has it now and it's going to get used.

He calls on Hal Jordan and John Stewart to gather all of the heroes in one location to try to attract as many of the OMAC's as possible for the EMP to affect. Sasha, meanwhile, will use her OMAC infestation to her advantage and try to hack into Brother Eye to introduce the virus. 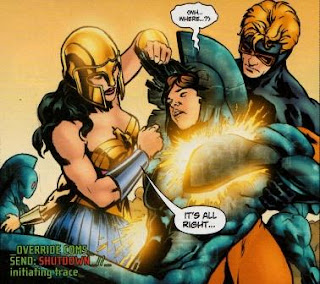 Brother Eye takes the bait, as a horde of OMAC's descend upon the gathered heroes. As the battle is engaged, Batman and Sasha enact their plan, with Batman using the EMP generator while Sasha shuts down the communication network controlling the OMAC's. It's a success, as OMAC's the world over shut down, and the ones in the vicinity of the EMP are rendered useless.
Brother Eye manages to break Sasha's hack before all of the OMAC's are shut down. Batman estimates that there are still 200,000 under it's control, as Brother Eye disappears again without a trace. 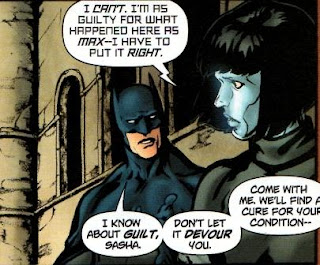 Back at Checkmate headquarters, Sasha tries to come to terms with what has happened to Checkmate and to herself. She feels just as guilty for not realizing what Max was really up to earlier, and it's now her responsability to rebuild the organization.

Batman tries to ease her guilt, and offers to try to find a cure for the OMAC nanobytes that are now merged with her physiology. She turns away, commenting that the virus didn't work on her and she's more machine now. Batman plays on their past feelings for each other and kisses her, proving that she does feel emotions and is not an unfeeling machine like Brother Eye.

And speaking of Brother Eye, in a move that would make any spurned lover proud, he hacks into all television transmissions and broadcasts the actual moment of Wonder Woman killing Max Lord for all the world to see. An image, that taken out of context, looks like Wonder Woman executing an unarmed man.

...an unfeeling machine my ass!

I think the main thing we learned, is that my fingers are sore from having to type all of the plot summaries to get us up to speed. Continuity is a fantastic thing when you're in the thick of it, and when it's plotted out as well as the DCU was at this point in time. But trying to jump back into the deep end after four years takes some work.

Still, this issue holds up really well, as Greg Rucka is in his element here. Checkmate is a concept that played to his strengths, with the espionage and political manuverings meshing flawlessly with the rest of the DCU through Batman.

He advances the character of Sasha Bordeaux to the next level, by forcing her to live in the shadow of Max Lord. She must rebuild the organization that he had almost destroyed, and come to terms with being infected by his OMAC nanobytes. She would go on to play a major role in the series Checkmate, which was started not too much later.

Jesus Saiz handled the art for most of this series, but unfortunately could not do the whole series himself. Since this was one of the titles that counted down to the start of Infinite Crisis, it had to finish on time. That meant that this issue had fill in art by Cliff Richards, who does an admirable job, but the issue does suffer as the art style changes every three pages or so. 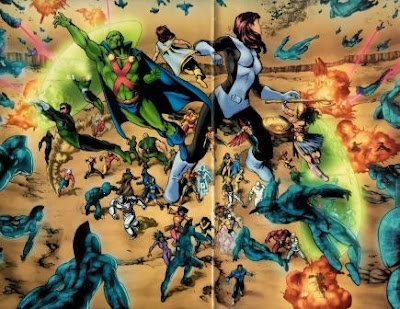 My scanner doesn't do it justice, because it can't handle the width of a double page spread, but this is one of my favorite shots from the book, where the heroes are surrounded by an army of OMAC's. Good stuff.

That would go on to become a major weakness of the tightly plotted story that lead up to, and included Infinite Crisis. In order for everything to flow on time, artistic sacrifices had to be made and a lot of fill in artists were used. Most of the time they were used wisely, like Jerry Ordway pencilling most of the Earth 2 moments during Infinite Crisis, but it still hurt the overall package.

For my part, and it's probably pretty obvious by this point that I really enjoyed this whole period of DCU stories. There's not a whole lot of snark this time around, firstly because the comic still holds up to modern standards, as it's barely four years old. Secondly, it's just a good story.

I've re-read Infinite Crisis a couple of times since it's release, but reading this issue made me realize that I've never sat back and re-read the build up to that series. I probably should. Maybe one of these lazy afternoons when I have the time to devote to 30 some issues I'll give it a shot. Until that time, I'll let the Randomizer do my picking for me.

Related links for your surfing pleasure...
Posted by TomO. at 3:02 PM