WHAT I REMEMBER: I remember that Cerebus was huge, right as I was getting into comics. I remember either a barbarian Cerebus or a Wolverine Cerebus from my earliest collecting days. Obviously, the beginning issues by that time were way out of my price range, so I never did really start reading. After all, there were real super-heroes that needed my attention.

I remember a couple of years later thinking to myself that I should pick up the trades that were readily available, but for some reason I never did.

Then, about five years ago or so, I got three free issues from a local comic book store. I can't remember why they were giving them out, but hey...it's free comics! For whatever reason, I never did read any of these and just dutifully filed them away. That pretty much brings us up to speed. 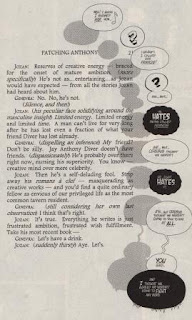 First page, and it's all words. Cool, I get a recap page to bring me up to speed.

Then again, maybe not. I have no idea what this is, but you may want to run out and get a sandwich...this could take a while.

Okay, I read through that page twice and I have no idea what's going on or who any of these people are. Let's plow on.

Next up, we get three pages of a man thinking, while pouring himself a drink and smoking. He also shaves. All the while, he manages to compose three lines of writing.

Who knew that decompression existed back in 1999? I guess we can't blame Bendis for that one.

This blistering pace is interrupted as a maid servant knocks on the man's door to tell him that his intended dinner companions will be dining in their own stateroom tonight. Oh well, more time for the man to finish his drink, smoke more of his cigarettes, and compose two more lines of dialogue. All over the course of four pages.

For the most part, Dave Sim does a good job with the storytelling on these pages with minimal dialogue, but I have no idea what this panel is supposed to convey to me.

All of this lasts clear on to the next morning, as we join our writer friend for breakfast with Cerebus and his girlfriend (?), who stood him up for dinner the night before. 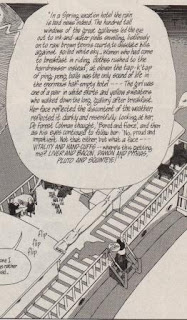 Wow, that's got to be one of the largest word balloons I've ever seen. I'm definitely getting the feeling that Brian Bendis has read some Cerebus in his time.

So we finally get the chance to have some real character interaction and instead we spend two pages with our writer friend reading passages from a book, which I'm assuming is one he has authored. Everyone seems terribly pleased and entertained. That makes three of us, I suppose.

Apparently Dave Sim used up all of his words on that one word balloon, as we're back to more silent pages. 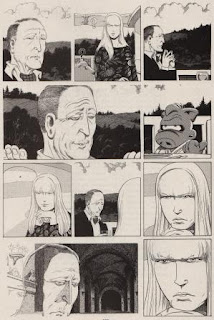 I take back what I said about Dave Sim doing a good job with the storytelling, as he has completely lost me with these panels. Apparently, Cerebus' girlfriend gets mad about something. Damned if I can figure it out.

She's happy on the next page, however, also for reasons I can't figure out. The page and a half of solid text doesn't really help either. This looks like more passages from the writer's book, but again, that's just a guess as it's never made clear from the context.

Back to scintillating conversation, where we find out that the writer's wife is in a sanitarium. Cerebus rather cluelessly calls it a "nuthouse", and the writer storms off and locks himself in his room.

Cerebus gets a lecture from his girlfriend about tact, and is sent back out to apologize. He does so, begrudgingly.

The issue ends after a page of her waiting for Cerebus to come back, which he never does. Now she's mad again.

I think the main thing we learned, is that when you are dealing with a massive 300 issue epic...start from the beginning. Don't start on issue #241, which is the second issue of the second book of the thirteenth collection.

There wasn't much here to grab a first time reader, but to be fair, at this point in the story I'd be surprised if that is who the intended audience is.

Cerebus is barely in this issue, and not much back story is given to us.

The last three pages of this issue are a sort of "director's commentary" from Dave Sim on what went in to this issue. After reading that, I can appreciate a little bit more the craft behind this issue. I'm afraid it's all too terribly clever for me, with ruminations on F. Scott Fitzgerald and Hemingway and the art of writing.

I can see why some people treat this book like the second coming, but I'm probably begging off here.

All characters and artwork reproduced are (c) Dave Sim

UPDATE: I knew there was something familiar looking about the writer character in this book. He's Dave Berg from Mad Magazine!