SuperPatriot #4...or bullet holes are the new black

I actually don't remember a whole lot about this title, other than it had some killer artwork by Dave Johnson (which I touched upon here already), and that it was more fun than I thought it would be going into it.

Erik Larsen's Savage Dragon was a fun book, and was definitely the most put together of the initial Image titles. Because of the quality of that title, I tended to give his other series at least an initial read. Of those, I remember enjoying two...SuperPatriot and Vanguard.

SuperPatriot The first page is a nice splash page that reminds me instantly why I like Dave Johnson's artwork. 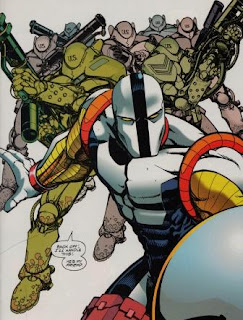 In the foreground is one of the Youngblood guys, whose name I can't remember. I'm sure it's Death-something or Blood-something...We'll just call him DeathBlood for now.

The visuals on DeathBlood are all right, as Johnson does the best he can with the design he's been given. The real highlights are the U.S. Soldiers in the background. I like the way he draws tech, as it's pretty unique and looks usable and used at the same time.

It seems that DeathBlood has been called in to put a stop to SuperPatriot's rampage. He's apparently an old friend, and it's up to him to talk him down. The first thing DeathBlood does is give us his name. It's Diehard. I was close. 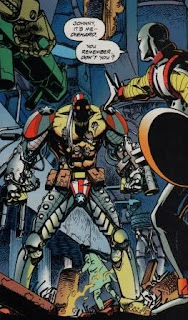 SuperPatriot doesn't seem to remember or care about his name either, as he proceeds to blast Diehard in half. This causes one of Diehard's other android bodies to activate, this one being a prototype model, to try again.

Two pages later and the battle still rages, with neither android getting the upper hand. Diehard is not the only member of Youngblood present, as Shaft is on scene too. We find out that the reason that SuperPatriot is out of control is that he's been reprogrammed by the Covenant of the Sword. Shaft tells the suits on scene that this is Diehard's play, and no one moves until he either succeeds or fails.

Diehard succeeds in momentary getting the upper hand, and presses the advantage by ripping off SuperPatriot's weaponized arm. 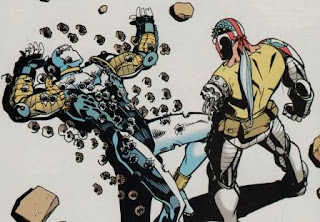 It's a good thing he has two of them however, as he uses the other one to plaster Diehard with a flurry of gunfire. He leaves him for dead and begins to walk away. Diehard was playing possum, and strikes SuperPatriot from behind with his severed arm.

After Shaft gets the government suits to back down, he has to work on the other members of his own team as Badrock is also itching to get in there and do some damage. 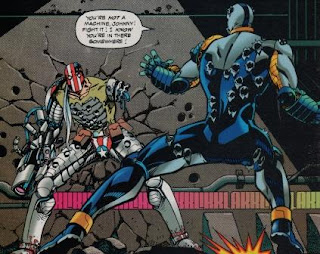 Back to the fighting, and it looks like Diehard is beginning to realize that he can't stop him by force alone. He starts to play on their history together as WWII teammates in The Allies. He rips off his mask and forces him to confront his human side, which is still buried beneath all of his circuitry. 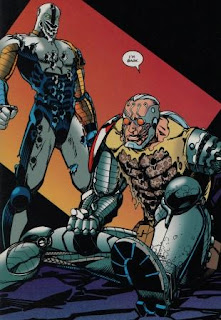 That's eventually enough, as SuperPatriot is finally able to overcome the reprogramming and come to his senses. His link to the Covenant of the Sword is broken.

Back at their secret base, the member in charge of controlling SuperPatriot is demoted in a rather permanent way. 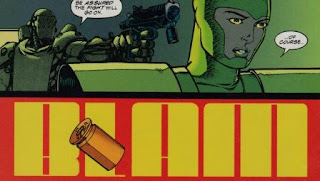 Later, at a government hospital, SuperPatriot is getting fixed up with a new arm and a shiny new, bullet hole free body. He's approached by one of the government agents from earlier, who seems to think that SuperPatriot should be grateful to the U.S. Government for the fact that he is back in one piece. SuperPatriot doesn't see it that way and leaves without saying a word. 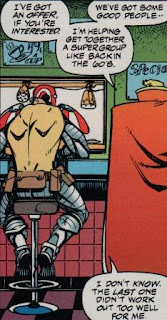 SuperPatriot heads to a diner to figure out where to go next, over coffee and pie, when he is approached by an old teammate. It seems Mighty Man is getting the old band back together from the 60's and is looking to do it right this time.

Intrigued by the idea of being able to do some good, outside of government intervention, he agrees.

...that not all of the early Image stuff isn't worth the million-plus pages of paper it's printed on.

This series was a lot of fun, and even reading just the last issue some 15 years later, it hasn't missed a beat. It doesn't pretend to take itself desperately serious, so if you're looking for a good rip-roaring yarn, you should check out this mini-series.

You'll be more than aptly rewarded with just the artwork alone, as Dave Johnson is truly an original talent.
Posted by TomO. at 12:49 PM