The Vision And The Scarlet Witch #5

TITLE: The Vision and the Scarlet Witch #5

Regular readers of this blog are well aware that The Avengers was the first comic book that I started collecting, and in pretty quick order The Vision would become my favorite Avenger. It was only natural, that this series would then be a no brainer for me.

This series actually has a couple of firsts for me, as it was the first mini-series that I remember buying off the rack. It's also the first mini-series that I remember abandoning before it was finished. Whether it was the twelve-issue commitment that scared me off, or the lackluster story, or a combination of the two is something I can't quite remember. The Vision (and the Scarlet Witch by extension) would remain one of my favorite characters for a long while, so I would imagine it was the story.

If I remember correctly, this series chronicled the Vision and Wanda as they left the Avengers with the news that Wanda was pregnant. How an android and a mutant witch could conceive a baby is something that this series would explore. And honestly, what better way to capture the imagination of a teenage boy than with the trials and tribulations of a couple pregnant with their first child!

Am I being too hard on this series? Or are we in for a real treat now that I'm a more world weary and mature reader? Let's find out...

The others call it...All Hallow's Eve! It's Halloween in the Marvel Universe, and the Vision is all dressed up in a tux and hitting the town. After relocating to the suburbs, the Vision and the Scarlet Witch have made friends with their new neighbors, who just happen to be heroes in hiding with the power of molecular control. Instead of using their powers to fight the good fight, they became magicians using their powers to create realistic illusions. It is the premier of their Halloween show, and that has brought Vision back to the city.

This being Halloween night though, means that Wanda is back at the house getting ready to flex her magick ability to take advantage of the nature of the night to communicate with her recently deceased mentor, Agatha Harkness. Before that however, she had just enough time call her brother Quicksilver to let him know that he is going to be an Uncle. 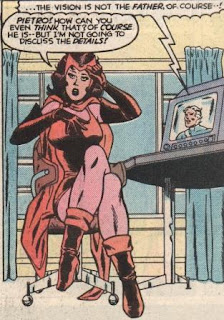 Really Quicksilver? You're going to give your sister a hard time about her robot husband, when you live on the moon with your wife who is a member of a race of humans that were genetically evolved by an alien race!
Quicksilver actually turns out to be really happy for his sister, and promises to be back on earth for Thanksgiving. It's really amazing how much these two characters have been changed (not necessarily for the better in my opinion) over the last five years. Heck, you can even throw in the Vision here as well. If you've never read a comic before the 21st century rolled around, you'd be asking yourself who the hell are these people? And why are they so damn happy? 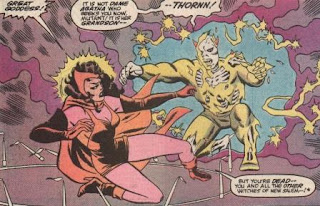 Back to Wanda's seance, and things aren't going quite like she planned. She manages to contact Agatha only briefly before she dissipates to be replaced by her undead grandson Thornn! Ooopsie...

Back at the magic show, Agatha Harkness is able to materialize briefly to warn the Vision that Wanda is in trouble and it all leads back to the Druid Tome. Vision informs us that they had tussled with Samhain and his Druid Tome years ago, and if Samhain is back then they are in real trouble. His tie to the physical world was the Tome, which they had destroyed last time. If he's back then they won't be able to use the Tome to send him back to the dead realms.

Meanwhile, Wanda finds out that she's in more trouble than she thought as Thornn has brought a whole cadre of undead supervillains with him. It turns out that the baby that Wanda is carrying is holding a spark of magickal life within it that the demons want to use to help them rematerialize into the living world.

That seems to make some logical sense. Vision, on the other hand, has the more fantastical unbelievable part of the adventure to come. To defeat Samhain, he must rebuild the Druid Tome. But wasn't it burned? It was, but luckily (and conveniently) the powers of the Vision's new magician friends will allow them to rebuild the book with just a single speck of ash.

But how to find a piece of ash from years ago? Easy...track down the child who was turned into a ghost from the previous adventure with the Tome and hope that the sheet that she wore for her Halloween costume that night is still intact, and that it has never been washed so that they can collect a piece of ash that must have been deposited on it when the Vision transported them through the smoke of the burning book.

You got all that? I hope so, as I'd be hard pressed to find a better way to recap that. 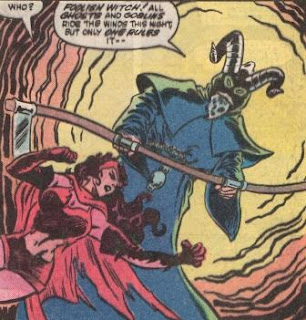 Seeing as how this is a special Halloween issue, the Scarlet Witch is visited by all sorts of dead relatives clawing their way back from the dead to torment her and try to reclaim her baby's life for their own.

She eventually comes face to face with Samhain, who...surprise, surprise...wants the slice of magickal life contained in Wanda's child for himself. These demons and creatures of the undead are a rather single-minded lot, are they not? 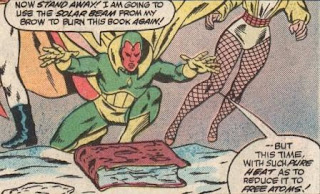 Naturally, Vision finding a two year old speck of ash proves far easier than finding a storyline that doesn't rely on wild coincidences and happenstance. That's not important now, as we have a book that needs burning!

Summoning all the power contained in his solar jewel, Vision reduces the Tome to atoms, forcing Samhain into a form of pure energy. Normally you'd think that would be bad, but Agatha Harkness is back to let us know that everything is going according to plan. 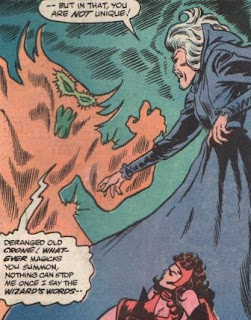 Now that Samhain is pure energy, she can control him and redirect him as never before. Taking advantage of the nearby hordes of undead super-villains and demons, she redirects his energy that he had hoped to put into the baby's essence and deposits them bit by bit into the assembled undead horde.

Her job now done and the baby safe, Agatha disappears to once again rest in peace. Wanda and the Vision are reunited in the living worlds, and all is right with the world. 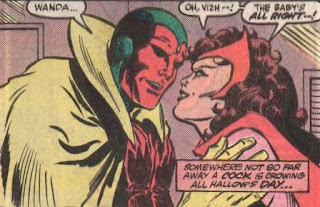 I think we learned why I never did stick with this mini-series originally. It wasn't bad per se, it was just decidedly average. How this story warranted a 12-part mini-series seems a bit of a mystery. I suppose the standards for mini-series was a bit more lax back in the day. In fact, on the back cover of this issue in an in-house ad for Secret Wars II. At least Marvel had the good sense to limit that series to nine issues, but I think I would still take all twelve of Vision and Scarlet Witch's series to one featuring the Beyonder.

Anyways, Steve Englehart and Richard Howell do a serviceable job with this particular issue. It's Halloween, so of course all of the usual tropes and trappings of the holiday are in full display...ghosts, zombies, witches, magick spells, underworld dimensions...heck, even Dracula makes a cameo!

At the end of the day, however, it's a throwaway story about some characters who are nigh unrecognizable in today's continuity. It's a shame, as these characters deserve better.

Related links for your surfing pleasure...
Posted by TomO. at 10:47 PM