As I mentioned the other day, I didn't even know that I owned this issue so what I remember is pretty much nothing.

It's from the period in time where Steve Rogers resigned from being Captain America, and it takes place smack dab in the middle of The Fall Of The Mutants storyline that was running through the X-titles at this time.

Short preamble today, so let's just get to the book...

The issue opens up with Famine wreaking havoc in the middle of the midwest, withering crops to ash and desiccating the local cattle. She's one of Apocolypse's Four Horsemen, and she has been let loose to terrorize America's heartland. Every living thing in her way perishes, be it crops, animals, or the farmers who tend them. 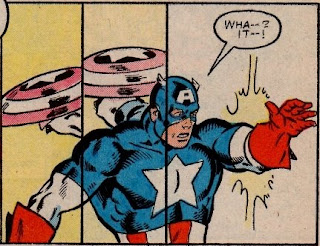 We then cut to Steve Rogers in the midst of a nightmare. His foe? It's a hulking man in a grey three-piece suit. Steve struggles to overcome him, but he can't touch him. This is not a physical battle, which Cap learns the hard way as his shield dematerializes.

It would appear that the hulking form is the embodiment of the U.S. Government, which he's still trying to come to terms with since his forced resignation. Obviously, there's some resentment going on there.

If Cap was resentful before, he's going to be downright pissed now, as his costume disappears next leaving him fighting in just his star-spangled boxers. 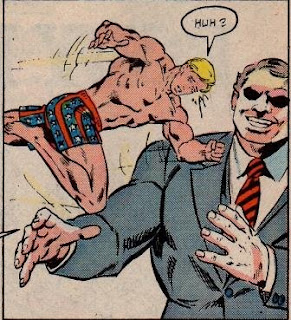 And we all thought that super-heroes wore their underwear on the outside!

Cap struggles to regain some modicum of modesty as he sees his black costume lying at his feet. He tries to put it on, but it soon transforms into miles and miles of red tape that engulf him like a mummy as he is taunted by the hulking figure, who has now transformed into a mocking visage of Ronald Reagan.

That's enough to wake Steve out of his nightmare, as he comes to in a plane flying across the country. With him are Nomad, The Falcon, Vagabond, and D-Man. Cap reassures D-Man, who apparently has just started his super-hero career, that even living legends have doubts and fears. After his pep talk, The Falcon wonders how he's going to convince Cap to do what's right and retake his mantle that he was forced to resign from. That's a story for another day, as a distress call comes over the radio detailing Famine's path of destruction across Kansas.

This is the first story I've read that really deals with D-Man and I'm confused. My only exposure to this character was in Busiek and Perez's fantastic Avengers run. I remember when they were holding one of their membership drives that everyone was giving D-Man a wide berth, like he smelled bad or was a leper. Obviously there's more to his story, as in this issue he's the money man behind Steve's current activities. 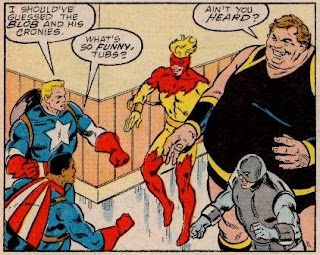 We cut to a U.S. Military base, where the new Captain America and Bucky run into Freedom Force. There, the Blob boasts about the recent death of the X-Men. Even though the X-Men were considered renegades at this point in time, it still sits uneasy with the new Cap who is showing signs of not being as much of a company guy as the U.S. Government would like.

Their little get together is cut short as Cap and Bucky are summoned to military command. There, they are informed about Famine and are ordered to go take her down.

Steve and his crew catch up to Famine just as she dispatches some military helicopters that were sent to stop her. The Falcon takes off, as Nomad, D-Man and Cap parachute down to the surface. I don't know what it is, but this panel makes me laugh. 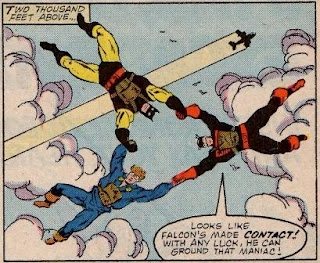 You think there would be a more superheroy way to make an entrance from 15,000 feet!

The Falcon is able to get Famine into a full nelson, separating her from her flying, robotic steed. Just as he is about to land, she twists and attacks the Falcon. She escapes his grasp, as the Falcon falls to the ground, doubled over with severe hunger.

The cavalry lands just in time as Nomad's flying discs stop her attack on the Falcon. Steve runs to check on the Falcon, as Nomad fights Famine and D-Man tries to tame her steed.

After all the damage that Famine has wrought in her rampage, Nomad tries one of the oldest tricks in the book on her. He throws dirt in her face! Now that's an old-school scrapper. He then follows that up with a "knuckle sandwich." I think I figured out who the Nomad really is, he's my grandfather! I mean, who else says knuckle sandwich anymore.

After making sure that Falcon is going to be all right, Steve rips a metal panel off of a tractor to use as a makeshift shield and enters the battle to stop Famine. 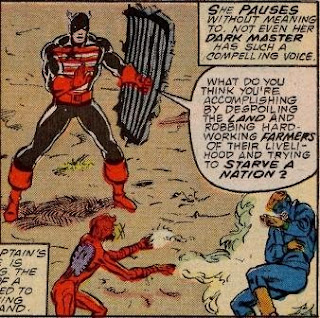 It shouldn't really come as surprise that a little mud in the eye and a knuckle sandwich were insufficient to take her down. Steve tries to bore her into submission with what sounds like a segment of one of FDR's fireside chats.

What do you think you're accomplishing by despoiling the land and robbing hard-working farmers of their livelihood and trying to starve a nation?

I guess Cap really is a man out of time.

Just as Cap wrestles her into submission, she and her steed are teleported away. Steve is confident that Nomad and Falcon will recover, but what about America. Who can bind the wounds of the land and feed her famished people. It sure was convenient that a villain out of nowhere attacked the very heart of America, right as Steve was coping with what it means to be a living symbol of that same country. I guess that's what tangential tie-ins are for, convenient plot movements.

The new Cap and Bucky show up, but just find an empty field with no sign of Famine. Poor new Cap, always a bridesmaid and never the bride.

Weeks later, we catch up with Cap as he visits Tony Stark in his Los Angeles headquarters of Stark Industries.

It seems Steve has come to seek the aid of his onetime teammate to help him construct a new shield. Things were so much easier in a pre-Civil War continuity.

Then again, maybe not. Steve talking to Tony about him giving up being Captain America...now where have I heard that before...

Steve tries out his new adamantium shield, content with the hopes that now that he is complete with his shield again, the nightmares that have been plaguing him will stop.

I was wondering the other day why I hadn't started reading Captain America before Mark Waid took over. After all, I was a huge Avengers fan since I first started reading comics in the mid-80's. I think after reading this issue, I know why.

It really wasn't all that good. I can see what Gruenwald was trying to do, it just seemed a little ham-handed to me. Maybe it was the fact that it tied into a crossover that was happening in another corner of the Marvel universe. It's not like Captain America was ever really closely tied to the X-universe, after all.

I've also enjoyed Kieron Dwyer's work in the past on the aforementioned Busiek run of The Avengers and his stint on Action Comics. Here, his work lacked the visual punch I remember his pencils having. He was still a competent storyteller here, but I was looking for a little bit more when I saw his name in the credits.

Related links for your surfing pleasure...
Posted by TomO. at 11:03 AM