Nick Fury's a badass...that's what I remember.

In a perfect world, that's all you need to remember. Unfortunately, the world has not been a perfect place for Nick Fury. I was too young (read not born yet) for the classic Lee/Kirby and Steranko stuff. My golden age for Nick Fury begins and ends with this title.

Jackson Guice brought me in (as recalled here), and I've been a fan ever since. It's been a rough couple of decades since then. When Fury has not been outright ignored, he's been mis-handled. Jonathan Hickman has been doing the best with the status quo he was given recently, but the jury is still out on Secret Warriors.

So what was it about these issues that jaded my view of all Fury comics since then? Was this run that good, that I was browned off of all future interpretations?

Let's stop messing around and find out...

We open up with a speedboat cruising down a river through Moscow. On board is Fury and a small team of operatives, along with one of his old Soviet army pals from WWII. Yuri Spetsburo has called on Fury to help him track down some rogue K.G.B. agents, for as he comments, "A scandal at this time within the Soviet Union could set back all of the gains from Glasnost and Perestroika." 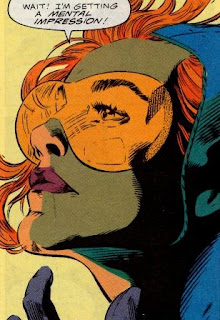 Nina, the precog on the team, gets a mental impression of one of the rogue agents. It seems they are chasing a Miss Rosa Kleb, formerly of the Soviet Glavnoe Razvedyvatelnoe Upravlenie. I hope her telepathic powers came with a spell checker, cause that right there is a lot of consonants and vowels all scrambled up.

They track Miss Rosa down to an abandoned cargo ship at the edge of the river. Nick Fury, ready to put an end to this chase, jumps out and into the cargo ship. Not ready to sit on the sidelines either, Yuri charges in shortly thereafter. 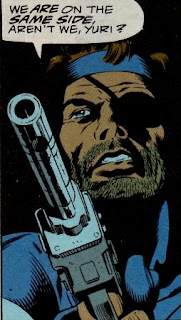 In a foreshadowing of the double cross to come, Fury catches Yuri sneaking up behind him. Yuri recalls their past associations and comradeship and brushes it off as Nick overreacting. Fury must obviously be getting too jumpy in his old age. They decide to split up, in a hope to find the girl faster.

Fury comes across her first, and quickly has to dodge the wildly flailing pipe that she comes out swinging with. So wild and uncontrolled are her strikes, that the floor gives way beneath them, sending them falling deeper into the cargo ship. This is another one of those pages that I have forgotten about over the years, but as soon as I turned the page I instantly remembered it. There's something about the way this page is structured and laid out that I liked at the time, and still enjoy.

Back into the action, Nick manages to grab hold of a crossbeam and snags Rosa's arm, saving her from falling to her death. He heaves her over to some planks to safety, while Nick makes the climb back up himself. 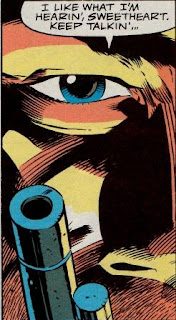 Something about her blackmail plot just doesn't sit right with Fury, so he channels his best James Bond suaveness in an attempt to get her to talk. I already highlighted the most entertaining pick-up line of the issue here, but old Nicky keeps laying it on.

No one can resist the charms of Nick Fury!

She is just about to explain how they were secretly working for someone else, when Yuri sneaks up behind her (it's apparently his signature move) and snaps her spine with his prosthetic hook hands.

Did I mention that he had a prosthetic hook for a hand? Honestly, what good double-crossing espionage villain worth his salt doesn't have a prosthetic hand.

Paralyzed, Rosa is unable to defend herself as Yuri shoves her out into the open towards Fury, yelling that she's armed. In all the confusion, Fury takes the shot, relying on his military training and reflexes. 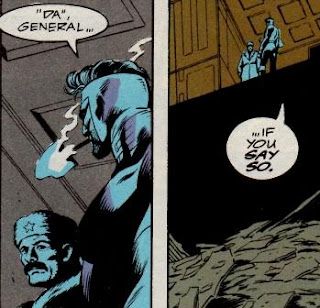 Yuri "explains" to Fury how she had come at him in the dark and just barely managed to hold her off until Nick saved he day. It doesn't sound like Nick buys his story, but it's apparently convincing enough for him to not notice the blatant lack of a sidearm that she was supposedly brandishing. Ah well, Yuri, whatever you say...

We now take a complete 180 with this story and head over to a convention hall, where A.I.M. is holding a weapons and technology expo. It seems that A.I.M. has cut its ties to Hydra and is trying to rebrand itself as a weapons manufacturer, minus all of that "world domination" nonsense.

I was going to recap this scene, but I can't draw any logic about how an ex-criminal organization which specializes in weapons manufacturing is holding an expo which caters to "individual malcontents right up through aggressive nations." How any of this is legal, or allowed to happen so openly is beyond me. It's not like they're trying to be inconspicuous about it, as a reporter from Modern Warrior Magazine is on the scene because their "readers are very interested in learning more about A.I.M.". I'm sure the U.S. Government is too, hopefully they have a subscription as well.

The reporter continues to interview the A.I.M representative down on the show floor, as we see a bald man shopping for weapons in the background. Just as he finds the biggest (and also conveniently loaded) rocket launcher at the show, the reporter shows her true Hydra colors by assassinating the A.I.M. rep with her secret camera gun. The bald man uses the rocket launcher to blow a hole in the ceiling as Hydra agents parachute down and secure the entire area. 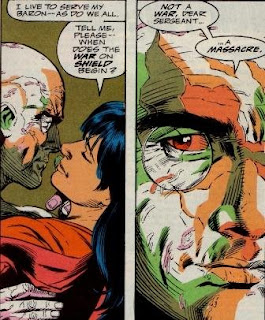 Enter Baron Von Strucker, who praises his agents for an operation well done. All of A.I.M.'s prototypes and their full inventory of weapons is now his. Everything is now in place for his war on S.H.I.E.L.D.

But wait, the issue's not over yet. What good Fury story is complete without a visit from The Red Skull, and that's just what we get in the last three pages.

It seems our friend Yuri from the first half of the book was double-crossing Nick Fury for The Red Skull. The whole "rogue K.G.B. agent and blackmail plot" was a ruse to keep Fury occupied so Baron Von Strucker could take out A.I.M. without any interference from S.H.I.E.L.D. 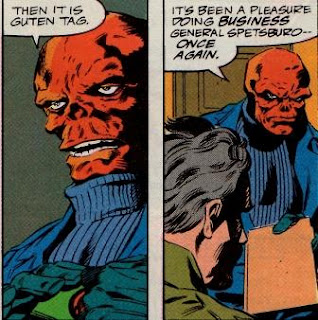 Yuri was nothing more than a reluctant double agent, as he was being blackmailed by The Red Skull. It seems The Red Skull had some papers that implicated Yuri as a Nazi sympathizer back in WWII and was threatening to release them unless he helped The Red Skull distract Fury. Now that the mission was complete, the documents are Yuri's as The Red Skull bids a fond farewell.

In the end, Yuri learns an important lesson about dealing with supervillains, as the papers that he sold Nick Fury out for turn out to be completely blank. The double crosser gets double crossed. Despondent, he turns his gun on himself, unable to live with what he has done.

The big takeaway that learned form this issue is that typing out anagrams are a pain in the butt. In this issue alone we have S.H.I.E.L.D., the K.G.B., and A.I.M. all doing their best to wear out the period key on my laptop. Although, now that I think about it, it's easier than typing out Strategic Hazard Intervention, Espionage Logistics Directorate every other paragraph.

In the end, that wasn't enough to distract from my enjoyment of this issue. If you ignore the rather silly premise of the A.I.M. convention, you end up with a nice little espionage tale. This is a story that works well on it's own, but is also obviously part of a larger storyline.

D.G. Chichester (no, not more initials) does a good job setting the scene and keeping you guessing as to who is actually working for whom. Yeah, for the most part the double-crosses are telegraphed well in advance, but I did enjoy the final three pages with The Red Skull. I had forgotten about our boy Yuri by this time, so it was nice to see Chichester bring it all back together.

I've already expressed my admiration for Butch Guice several times already, so in lieu of sounding like a stalker I'll just say that I enjoyed his work here. It wasn't the strongest work I've ever seen him produce, as the consistency was spotty, but it was good nonetheless.

At the end of the day, we have a solid Nick Fury storyline featuring A.I.M., Hydra, Baron Von Strucker, and The Red Skull. You can't ask for much more than that.

All characters and artwork reproduced are (c) Marvel Comics
Posted by TomO. at 9:01 PM