I actually don't remember a whole lot about this particular issue. The Brood have never been one of my favorite X-Villains, and I guess I just sorta let this storyline drift from my memory.

I already mentioned previously what I love about the X-Men from this period, so I'll spare you once again.

One thing I do remember vividly about Uncanny X-Men as a title, was that it was the first book where I really paid attention to the credits above and beyond writer and penciler.

Dan Green was probably the first inker that I knew by name. From the day that I started reading the X-Men he was the inker and finisher for Uncanny, and he definitely helped smooth the series over from penciler to penciler.

The other name that will probably stick in my mind until the end of time is Tom Orzechowski. His lettering defined the look of an X-Men book like no one else. So strong was his presence that it was instantly noticeable when absent. I'm not too much of a lettering aficionado, but an X-book just isn't a real X-book if it's not lettered by Orzechowski.

And with that, let's dive in and see what trouble the Marvel mutants have gotten themselves into this time.

The first page is pretty much what every Chris Claremont book needs...a recap page to bring us up to speed, as Claremont has split the roster up into three teams. 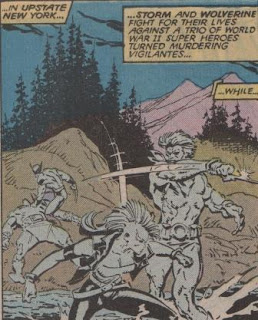 Ororo and Logan are in upstate New York dealing with murderous WWII super heroes turned vigilantes. This here is the version of Storm that I love. The first issues of Uncanny X-Men that I started reading off the racks were from when she returned to the team with the mohawk, leather and no powers. I know people like to poke fun at the punk Storm, but I could never get into the more traditional tiara and half cape.

Wow, two paragraphs in and I'm already waxing nostalgic about the good old days. I'll try to keep it in check a little bit better for the rest of this review.

Over in Scotland, Juggernaut is being given a hard time by Longshot, Rogue, Dazzler and Psylocke. Finally, in New Mexico, we catch up with Havok and Polaris who are enjoying date night at a local fiesta.

Not far from the fiesta, a group of local twentysomething's are camping at the foothills of the Rio Diablo mountains. Unfortunately for them, their peaceful night is shattered by the sudden appearance of a meteor crashing from the heavens and landing right next to them. 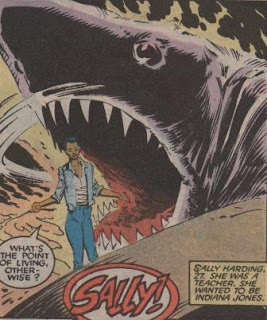 Surprised that they're not dead, they rush over to investigate and find a giant shark has crash landed? Yeah, I don't remember that...nor do I really understand it, either.

But wait, it gets even more incomprehensible! The shark is still alive and it eats one of the campers.

But wait, it gets yet even more incomprehensible! The ground turns out to be littered with The Brood, who begin to attack the remaining campers. So wait...The Brood traveled through space in a giant shark!?

On a side note, it turns out they do! I googled Brood Shark and the first web site to pop up was this one. It's truly an interesting read, even more interesting is that I have absolutely no memory of these star sharks, even though the apparently date from the earliest Brood appearances.

Let's just let it slide and move on. The Brood at least look cool, so we'll give their questionable choice of space travel a break this time.

Only one camper lives through the experience, and we catch up with him a couple of days later. He's back on his job as a paramedic in Denver, and is tearing through town in his ambulance on the way to an emergency. 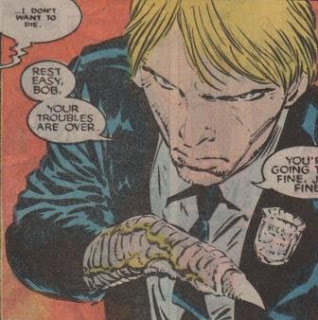 He comes upon the scene of a mutant who has suffered a heart attack. During his cardiac arrest, he lost control of his powers and ended up scorching his office.

Our paramedic camper approaches him alone, but just when you think he's going to help him, it turns out that he's really a Brood now and he unfurls a tentacle to infect the lawyer as well.

We now cut to a scene of one of my favorite X-Men hideouts...the old Reaver base of operations in the Australian outback.

On a mesa in the distance sits Gateway and his bull-roarer. I always liked Gateway, and the idea of the silent, enigmatic teleporter. I wonder if he's still around in any capacity these days? I confess to not being up to date on my Marvel continuity, so he could be a full fledged member of the X-Men for all I know.

But on this day, he uses his powers to teleport Madelyne Pryor back to the outback. She was off doing some shopping, and returns to find the base deserted as the X-Men are all out on mission right now. Madelyne's husband, Cyclops, has left her and the team by this point, but she has stuck around with the X-Men to help assist them. 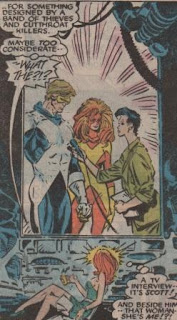 Relaxing in the base's computer room, she turns on a monitor to find an interview with Cyclops and Jean Gray as part of the newly formed X-Factor. So here, my x-timeline is getting a little shaky. From the dialogue, this is the first time that she has seen Scott in his capacity as leader of X-Force and that his first wife is back from the dead and by his side.

This book is from 1988 and I remember that X-Factor came out in 1986. So that's 2+ years of books where the X-Men were unaware that X-Factor existed? I know that they worked in secret for a while, but this surprised me.

Back to the story, Madelyne overreacts to the images on the screen and punches the monitor. The feedback causes a mini-explosion, which renders her unconscious (and so begins the road to Goblin Queen Madelyne Pryor).

Back in Dallas, Harry Palmer, the brood infected EMT, returns to his apartment after his shift. He is unaware that the Brood is making him infect other mutants, having just a vague feeling that something is not right.

He enters his apartment to find the X-Men, now recently reassembled as a complete team, waiting for him. Thanks to their previous encounter with the Brood, Wolverine was able to track Harry from the crash site in New Mexico to Denver. The X-Men are taken by surprise as Harry summons heretofore unknown strength and takes them down singlehandedly.

The X-Men recover to find that Harry has ditched them once again. Psylocke is concerned that they are chasing an innocent man, as she detected no mental impressions of the Brood within Harry's mind. Wolverine trusts his senses more than Psylocke's mutant powers and heads off to find him once again.

Aboard a bus, hoping to get as far away from the X-Men as possible, Harry is surprised to see Rogue turn around in the seat in front of him. Wolverine has obviously found him, and brought Rogue along for some extra muscle. 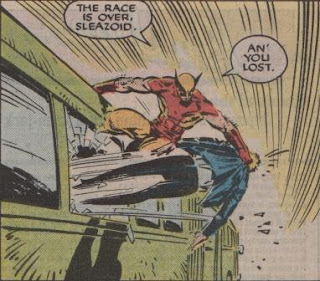 Once again, his Brood powers kick in giving him extra speed and strength. Rogue, apparently not learning from the experience just two pages ago, is caught off guard by his quickness. Harry's Brood tentacle emerges again, and just as he is about to infect Rogue he is yanked from the speeding bus by Wolverine.

Trapped in a dead-end alley, Wolverine approaches him to end the Brood threat once and for all. Rogue tries to quell Wolverine's berserk rage until Psylocke can try to learn more with her telepathy. It's all for naught, however, as she is soon interrupted by the arrival of the police, who order Wolverine and Rogue to stand down. 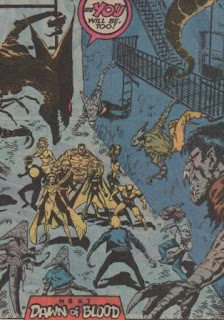 Wolverine lunges at the cops and takes them down in two quick panels. Rogue tries to hold him back, surprised that he would murder two cops in cold blood. The rest of the X-Men catch up, and it's revealed that the cops were actually Brood.

Trapped in the same dead-end alley, the X-Men are now surrounded by a horde of Brood descending from all angles. It appears they are back in full force to turn the X-Men into Brood as well.

My ennui towards the Brood has not lessened over the years. This was a rather dull story, compared to the high esteem with which I hold this run of books in my memory. I'm not a biggest "X-Men in space" fan, so seeing them go up against a generic alien race never really excited me too much.

Still, it was fun to see some old favorites back in action like I remember them. Even a boring X-Men book from the late 80's is better than what's been going on in the X-world post Morrison/Quitely.

I've always enjoyed the work that Marc Silvestri did on The Uncanny X-Men, even more so when he moved over to Wolverine. I've been hoping that the Randomizer would pick one of his Wolverine issues written by Larry Hama, as I remember enjoying the hell out of that run and am curious to see how it holds up.

This issue was also the downfall for Mohawk Storm, as she starts to grow her hair out and get a costume that looks more like her "all new, all different" debut. Oh well, nothing perfect lasts forever.

All characters and artwork reproduced are (c) Marvel Comics
Posted by TomO. at 7:09 AM