I remember really liking Ruse when it came out, as it truly was a one-of-a-kind book in it's day. It was a Sherlock Holmes mystery/adventure title set in a world very much like Victorian England, just weirder and more fanciful. A perfect example of which are the Gargoyles that abound in the city of Partington, only in this reality they are more than just statues.

Simon Archard was the detective that the book nominally revolved around, but we see and experience everything through the eyes of his assistant Emma Bishop.

Mark Waid was in fine form on this book, and it showed in the pages what a good time he was having. Between this title and Sojourn, I was tempted to try other CrossGen books as well. Their hook was the overarching mythology of the "sigil". I couldn't tell you now what the sigil ever meant, or if it ever got explained before the company folded. A big deal was made when George Perez singed an exclusive with the company and I remember trying to read a couple issues of his title, Solus, which was supposed to begin to explain the mythology. Let's just say I hope the Randomizer never picks that story to review, as it left me more confused after reading it than I thought I ever was before.

Anyway, Ruse was a great little title that gave the whole sigil nonsense a very wide berth. I seem to remember Emma Bishop, who is the sigil bearer in this title, using it's power only once.

The original artist was Butch Guice, and I was a fan of his from back when he was going by the name Jackson Guice on the Superman titles in the early 90's. I ended up following him from there to Marvel, and them back to DC, and finally to CrossGen. I'm getting too sidetracked though, as he doesn't pencil this particular issue, but he's a big reason that I started reading the title in the first place.

That's about all that I remember, so let's get on with it already...

We start out with something that always makes me happy. It's a recap page, but it's done in a way that adds to the overall flavor of the book. What we have is a page of The Penny Arcadian reproduced. The Penny Arcadian was the newspaper of the town of Partington, which is the city that Archard and Bishop are based out of.

What we get is a recap of their last mystery/adventure, written as a news article of the day. It's a great way to bring you up to speed, without distracting from the book itself. In this particular incidence, we find out that they are returning to Partington after breaking up a pirate ring in a nearby shipping port.

The town of Partington is still devastated from Archard's battle with his former partner, Lightbourne. Simon is none too pleased when he returns to his house to find his books did not survive the destruction of his mansion, and the reconstruction is not up to his standards.

There's a lot of gamesmanship over the next couple of pages between Archard's servant-staff and Emma Bishop, of which there appears to be no love lost.

Archard has his own troubles, however, as a group of wealthy and influential townspeople have camped out and are demanding an audience with the detective. They are left unsatisfied when it is revealed that Archard and Bishop have left again to track down a lead on Miranda Cross, who Simon deduces was the real mastermind behind the previous harbor attacks.

It's off to the airfield for a quick zeppelin ride, as Simon doesn't trust the sea ports after their last case. It only takes a few panels, however, to reveal a saboteur on the ship who has irreversibly damaged the gas lines. So we're off to the top of the ship to evacuate.

I don't know about you, but one look at these "lifeboats" and I think I'd take my chances on the zeppelin. 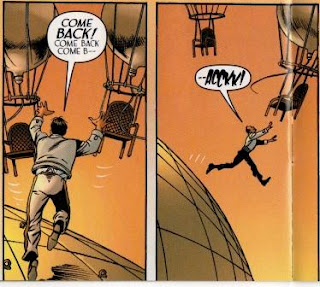 Naturally, everyone but Emma and Simon make it off the ship before the saboteur makes a play for one of the last two floating chairs. In all the chaos the tethers come loose, and the he falls to his death with a last ditch lunge for safety.

Emma fears that she is going to have to use her sigil power to save them when Simon makes a rather bold request. In order to get off the airship, he must have her dress! We're left with the cliffhange of Emma having to choose between her modesty, or her hidden powers. Decisions, decisions... 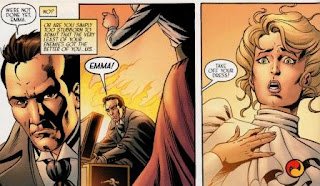 Not too much, unfortunately. Most of this issue is a bridge that sets up the next major case without getting too far involved into the new one yet. Scott Beatty whips up a quickly paced tale, but almost counter intuitively packs it with a lot of dialogue. At no point was I at a loss for something to read, or unaware of what was going on. Overwritten? I don't think so. I took it more as a flowery nod to the baroque style of the times it is set in.

If anything, reading this tale that happens so close after the destruction of Partington makes me want to go back and read the first 12 issues again. I instantly got back into the swing of this title, and am a little saddened that it had a premature end.

Paul Ryan does a very good job with the pencils, capturing the look of the characters and town without directly aping Guice's style. The production value of CrossGen comics always made the art stand out a little bit better than the competition.

At the very least, CrossGen knew how to make their books look good. As a testament to that fact, look how many of their artists went on to do huge things over at Marvel.

I'm sure there are more, but that's all I can remember without resorting to wikipedia.

All in all, CrossGen had some really good titles that I still wish were around. Alas, they proved no match for backroom office politics and mismanagement within the publishing company. It's too bad that no titles were ever able to escape the black hole of the company's demise to set up shop at a different publisher. I thought I had heard that Disney bought the rights at one time, but as far as I know nothing ever happened as a result.