This period of X-Men stories was really the beginning of the end of my obsession with the X-Men. I'd been reading for about 100 issues, and things had been building up to a fevered pitch over the last two years.

Jim Lee came on and took the title by storm and really rejuvenated things. Chris Claremont seemed to be refocused as well, and I was looking forward to the new titles and teams.

The actual execution, however, once everything was underway was underwhelming. After Claremont left, it didn't seem to be a cohesive universe anymore. There were too many people with too many ideas of what they wanted the X-Men to be, and not enough editorial control on what was best for the X-Men. As much flak as he gets for dangling subplots that last for years, you have to give Claremont credit that he kept that train rolling for far longer than it seems logically possible.

So Claremont was gone, with Jim Lee soon afterward, and it was a long time before any creator on the X-Men got me excited again. You can see my review here of an issue from The Age of Apocalypse storyline, which was the last gasp as far as my Marvel Zombie sensibility was concerned.

So yeah, long story short...this issue wouldn't have been on my top ten list of issues to reread, but here we are. Let's man up and see what's in store.

Down The Rabbit Hole

The story begins with Jean Grey and Colossus arriving on a different world after going through a portal of some sort. The trip puts the whammy on Jean Grey as well as their travelling companion, the Primate, who originally hails from this world. 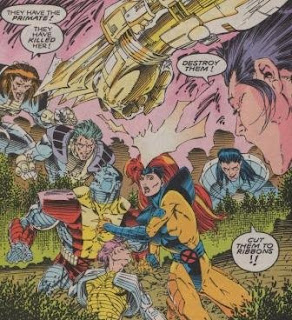 As they try to get their bearings, they are set upon by a group of rebels who are desperate to get the primate back. Jean is able to use her psychic blasts on one of the soldiers, but there are just too many of them and it's only a matter of time before she is overrun.

They want her alive, but Colossus is not so lucky. Against a barrage of energy blasts, he falls to the ground, reverting to his human form in the process. The rebels take one look at his human face and stop in their tracks. They recognize his face as the one from the prophecy who shall return.

Elsewhere on this world, Storm has landed alone in the middle of an arid desert. She tries to coax some water from the desert winds, but fails. Weakened and delusional, she is found by a lone nomad in the desert. 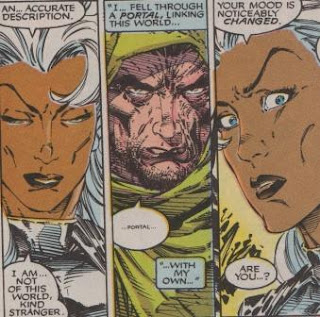 He carries her back to his dwelling and offers her food and drink. Feeling she can trust this stranger, she eats and tells the tale of how she got to this world. At the mention of the portal, the stranger grows uneasy and upset. He feels her breach of the portal that brought her from her world will result in the destruction of his!

We now cut to another location on this world where a battle rages between some native soldiers and more rebels. They are all surprised by the sudden appearance of Archangel, who soon makes short order of the rebels. 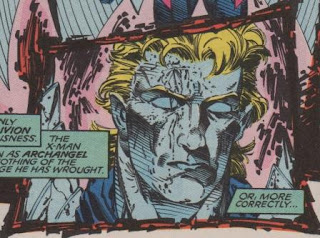 The soldiers are not the only ones surprised by the ferocity of this winged warrior, as Archangel is not aware of the actions of his wings, which acted as if they were alive. Coming out of his trance like state, he is feted as a savior by the soldiers.

Finally, we turn our attention to find the last of the X-Men to have landed on this world...Iceman and Sunfire. It seems they have landed in the middle of a local tavern. That would all be well and good, but they came through the ceiling and it appears the owner is none to happy with him. 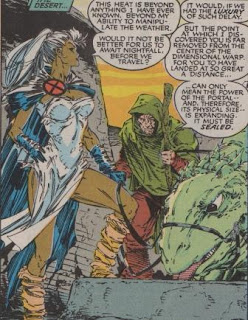 Back to the desert, and it would appear that Storm has regained her strength, at the expense of her outfit. Dressing in more appropriate desert/end-of-the-world armageddon garb, she and her new found companion are heading back to the portal to seal it before it destroys both worlds.

Colossus and Jean Grey, meanwhile, are being led back to the rebels base to spread the word of the "saviors" return.

If I was Colossus, I think I'd be starting to get a complex about going to other dimensions. If he's not being praised as it's world savior, he is being persecuted as it's destroyer. 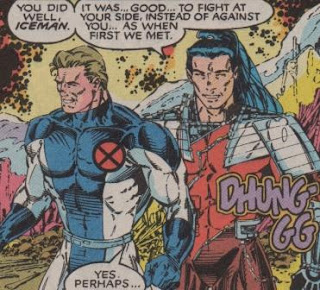 Back at the tavern, Iceman and Sunfire have solved their problem with a little fire and ice teamwork. How these two never ended up as roommates in a 70's sitcom is a true travesty of justice.

Out in the streets of the town, there is something else that has everyone's attention. A town crier is announcing the return of the savior...a warrior forged of steel!

Archangel has arrived at the palace of the Wordly Avatar of the Triumvirate, who leads the soldiers that he has previously saved. In return for his bravery in battle, he is bestowed the honor of Protector General of the realm.

His coronation is cut short as news of Colossus' arrival is brought to the Avatar's attention. A ceremony of honor is turned to one of duty, as she turns to Archangel to lead her troops against the rebel saviour. I smell some X on X violence coming up.

Back at the rebel camp, Jean and Colossus realize that they must find their other teammates before things get any worse. Ororo beats them to the punch, as she has snuck into the compound to track them down. As surprised as they are to see her, the are even more shocked about the identity of her companion, for it is none other than Colossus' brother! 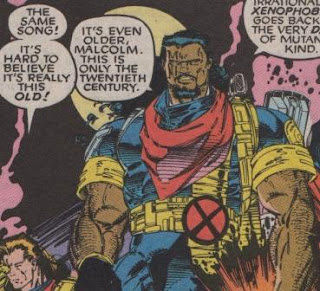 As if all of the scene changes weren't enough, we have time for one more...this time jumping to our earth where two murdered mutants lie on the street. Trish Tilby is reporting that the murderers appear to be fellow mutants, who are also tattooed with giant M's on their faces.

It would seem that Bishop is determined to stop the his future from happening, and if that means some nasty mutants need to be exterminated, thne he will not shy from his duty.

If you would've asked me before I started this blog what some of my least favorite X-things were, somewhere on that list would've been Colossus' family and Whilce Portacio. Neither of those two have worn well with me over the years.

With Mikhail and Ilyanna and all of their dimensional and otherworldly adventures, it just seemed to not mesh well with the down to earth personality of Colossus. It was like their situations were wasted on Colossus as a foil. How many times can you go to the "farmboy in the big city" trope? It was cool and all the first time, but enough is enough.

And as for Whilce Portacio, his style seemed new at the time, but hasn't aged well. All his characters and faces seemed to look the same, and he didn't get much of a chance to refine his take on the team as he left within a year of coming onto the title.

But after reading this issue, I may have to revise both assumptions. Mikhail was nowhere near the bore that I was anticipating. Of course, he's not really in this issue too much as it's mostly just the setting of the stage for the coming conflict between rebels, soldiers, and X-Men.

And as far as Whilce Portacio goes, maybe it's Art Thibert on inks, but his pencil work seemed a bit more varied and spontaneous than I remembered. Granted, it's still not really my thing, but I found myself enjoying more panels than I grimaced through.

So there you go, an x-title that I wasn't looking forward to ended up being mildly entertaining. That sounds suspiciously like "damning with faint praise," so I better stop while I'm ahead.

Related links for your surfing pleasure...
Posted by TomO. at 2:06 AM