I already talked a little bit here, about the two main writers who drove this series for most of its issues. There was one or two artistic heavyweights that contributed to this title as well. First, and arguably foremost among them, is Greg Land.

I'm beginning to think that the Randomizer has a keen sense of humor. It remembered the rather cheap shot that I took at Greg Land's expense in my review of Ruse. The truth is, I'm not that big of a fan of his. In fact, his art is more than likely enough to make me stop reading a book these days. To each his own, and his style is definitely not my own.

It wasn't always that way though, as I used to be a huge fan and it started right here in these pages. I remember positively loving his work on these issues for the first few years. It was his art, that got me to start reading CrossGen books when he started on Sojourn. Something happened when he left that title, however. He changed his style, and with it went his sense of storytelling and dynamism.

With that said, let's travel back to when men where men and pencils were drawn and not traced...

Apokolips Express
We open up with Black Canary riding as part of a convoy of S.T.A.R. marshals as they are transporting super-villains under heavy guard. We don't get too much of a chance to catch our breath as their train is sent through a boom tube and crashes on the surface of Apokolips.
Dinah and the marshal in charge crawl from the wreckage to assess the damage. They look up to notice they're not in Pennsylvania anymore, as an ominous statue of Darkseid stares down at them.

Already, I'm getting that old Greg Land feel back and I can see what I really liked at the time. His linework and characters have a good presence on the page, and in no way feel traced or overly posed. I don't want to turn this into a dissertation on Greg Land, so I'll just leave it at I really like the old Greg Land and wouldn't be disappointed to see him back again. Back to the story...

It turns out that someone has been targeting and kidnapping supervillains, and that someone just brought them to Apokolips. One of the supervillains on their list was Catwoman, who has taken advantage of the situation to break out of her holding cell. 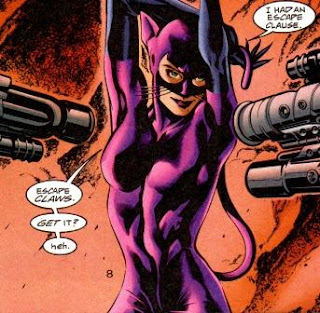 This is the 90's version of Catwoman with the violet and purple costume. I would imagine that this has to be near the tail end of this incarnation, as it couldn't have been too much longer before Ed Brubaker got ahold of her and brought her into the next millennium with a serious change of direction.

The kidnapper makes a play to return Black Canary and the S.T.A.R. marshals to their world in exchange for the prisoners. The lead marshal lets her gun do the talking for her and cuts the kidnapper down. This is not any ordinary kidnapper however, as he scrambles leaving his severed legs behind.

The marshals secure the crash site against the expected Parademon onslaught as The Black Canary and Catwoman give chase to the torso of the kidnapper. Oracle makes her only appearance in this issue as she enlists the aid of Power Girl to help search for the train, which has mysteriously disappeared. 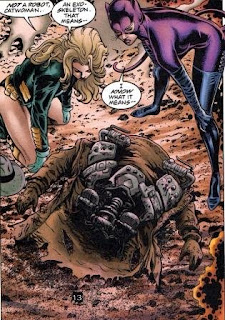 Dinah and Selina catch up to the torso to find that it's a mechanical exo-skeleton. Their perp is getting smaller and smaller.

At this point in the story, we have an artist change. Patrick Zircher steps in, and it's a credit to Drew Geraci and his inks that the flow between artists is relatively smooth. Greg Land would leave this title with next issue, but he definitely left his mark before he went.

Dinah and Selina push on, deeper in the bowels of Apokolips. Selina does a little digging and it's revealed that at this point Dinah has never met Oracle in person. I had forgotten that at the beginning of this title, they didn't really interact face-to-face. 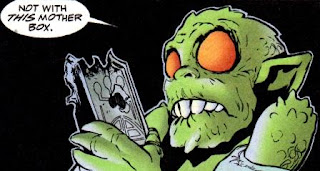 They finally catch up their quarry and find out that he is a parademon, but obviously the runt of the litter. He explains that he wanted the super-beings to help lead a revolt against his masters on Apokolips. How he ever thought he could get super-villains to cooperate is never explained here. Black Canary doesn't really care, she just wants his mother box so that they can get home. Oops! You mean the one with the bullet hole?

Unaware of their inability to get home, the head marshal has already written off their chances of escaping Apokolips. The only chance they have, she thinks, is to work together. That means freeing their prisoners. The issue ends with a nice of shot of Shrapnel, Mammoth, Spellbinder, Sudden Death, and Joe Gardner being deputized at the barrell of a gun.

I can't help but compare this version of the Birds of Prey to Gail Simone's, since her fantastic run is still fresh in my memory. This is definitely different, but it's still just as fun. It's just a more action-packed type of fun.

This issue still holds up, and I wouldn't mind cracking open a few more of these early issues. Especially since we are currently without this title at the moment, and quite frankly, Babs has been ill served of late with the last year or so of stories.