Before I get too far along, take a look at that cover price. One measly quarter...and that's for 48 pages, no less! A book this size would easily cost you 20 times that amount today, if not more. I wonder if that seemed like a lot of money back in the day? I can't imagine that a quarter in 1971 would amount to five bucks today, but I could be wrong.

Anyways, back to the book. The bronze age for Superman is one of my favorite time periods. They're great books to just pick up and read at random, as most of them are done-in-ones. They also keep alot of the silver age goofiness, but try to make it less goofy...if that makes any sense.

I can't decide if they are trying to be earnest in their goofiness, or goofy in their earnestness. Either way, I dig 'em.

This particular book, I haven't read yet. It's from a nice collection of Superman books I got off of eBay last year. Included in this run was the story that was recently collected in DC Comics Classic Library - Superman: Kryptonite Nevermore. I read the original issues last year, and then again when I picked up the hardcover. This issue we are reviewing today follows three issues after the Kryptonite Nevermore storyline.

In the afterword to that collection, Denny O'Neil talks about how he tried to make Superman more relatable by toning down his powers. He laments the changes not really sticking, for as he tells it in the next issue after he left Superman is back on the cover towing a planet. I checked my collection and didn't see ole' Supes towing any planets immediately following, but it wouldn't surprise me if I did.

We're also going to do something a little different with this issue. Like I said earlier, it's 48 pages long. In lieu of having a blog post that goes on forever, I'm going to break it up a little an have a separate post for each story in this issue. We'll call it Superman week here at Random Longbox central.

So sit back, relax, and let's enjoy some Kryptonian Kraziness!

The story opens up with Superman flying over the Atlantic Ocean in a torrential downpour. He's on a mission to the bottom of the ocean to obtain some samples of algae and plankton from the deepest part of the ocean.

Two pages in and we get a panel that's counter intuitive to the meme that comics will rot your kids' brain. In one panel, we learn that the Marianas Trench is the deepest point of the earth, and we get that depth in both fathoms and miles! Not only that, but it made me look up the word Ichthyologist! And they say you can never learn anything from comic books. 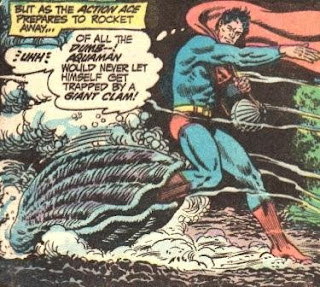 Back to the story, Superman has collected his samples, but in a rookie mistake has inadvertently got his foot stuck in a giant clam! Anytime you're left chastising yourself that Aquaman would never do anything this stupid, you know you screwed up.

Not to worry though, as a quick blast of heat vision causes the clam to let go without any long term harm to the mollusk. After a quick detour on the surface to save a foundering ship, it's back to S.T.A.R. Labs.

This book actually contains the first appearance of S.T.A.R. Labs! It's an auspicious debut, as Superman drops the algae samples off to Dr. Farr who is working to create a synthetic life-form to absorb pollution and transform it into pure oxygen.

His job done, Superman returns to his apartment building in the guise of his secret identity Clark Kent. He's disappointed to find the elevator taking too long, so he decides to jeopardize his secret identity by flying up the stairwell for any passerby to see.

Finally making it to his apartment, Clark decides to check in on Mrs. Goldstein first. She's delighted to see him and instantly tries to set him up with her niece Esther! After all, Clark is such a thoughtful boy he'd be the perfect match for her single niece.

Clark deftly changes the subject and learns that the other tenants in the building are holing a meeting about forming a vigilante committee to combat the recent strings of robberies in this neighborhood. See Clark, maybe if you spent less time gallivanting around the Atlantic Ocean, you could keep the crime level down in Metropolis! 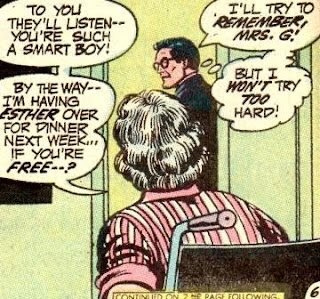 On his way out, Mrs. Goldstein makes one more play to get Clark set up with her niece. Clark says he'll think about, but we know the real truth. What a dick! This is probably why we aren't allowed to see thought bubbles anymore. Who knew that Superman was so heartless!

At the tenant meeting, Clark is unable to cool his hothead neighbors down and make them reconsider their plan of arming themselves. Not even Superman can defeat the N.R.A. lobby!

Back at S.T.A.R. Labs, a breakthrough is made! It seems one of the algae samples that Superman returned has started to mutate and is thriving on pollution. 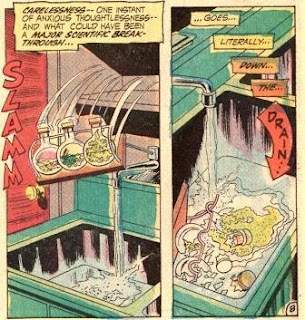 So excited is the technician, that he carelessly balances the algae samples on a shelf above a sink. In his haste he leaves the faucet running and slams the door, causing the samples to be washed down the drain and into the sewers of Metropolis.

After his failure to win over his neighbors, Clark decides to go out and do some good as Superman. On the streets, strange things start to happen.

As a man bums a light for his cigarette, a bizarre tendril of protoplasmic ooze rises from the sewer. Taking the cigarette from his hands, the tendril retreats back into the sewer. Pay attention parents! That there was a cleverly disguised P.S.A. about the dangers of smoking. Comics can't be all bad, can they?

It's not too long before the tendril strikes from the sewers again. Obviously bent on eliminating all forms of pollution, it attacks an old lady in a low rent district of Metropolis? Really? Is that some form of social commentary that I'm missing? 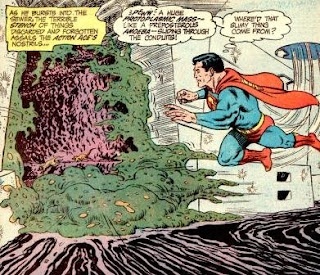 Never one to let old ladies suffer (unless he's only concerned about their feelings, and then all bets are off), Superman is on the scene and quickly gives the protoplasmic ooze a karate chop as it retreats back to the sewers. Superman follows, and using his microscopic vision, identifies the horrible mutation as part of the algae that he brought back form the ocean depths.

He notices that the glop is leaving the sewer sparkling clean and full of fresh air in it's wake, so he decides to let the ooze free. Superman uses his superbreath to coax the mutation through the sewers. No doubt, keeping it away from those filthy old ladies as well.

Superman's plan works too well, however, as the bilious blob soon becomes too engorged on the pollution in the sewers and bursts forth onto the streets of Metropolis! He tries to slow it's path of destruction with some good old fashioned fisticuffs, but his punches just get absorbed into the gelatinous goo.

Using his superbrain, he comes up with a plan...knowing that no living organism can survive in it's own waste, he just needs to find a source of pure, wholesome oxygen.

So that's your plan? You're going to shove its nose in it's feces? Well, if it works for keeping Krypto's Doghouse of Solitude accident free, then I guess we can try it out here as well.

Creating a super-vortex, he sucks the pulsing protoplasm up into the Ozonosphere, where the mutation passes out in the oxygen-rich layer of the atmosphere. Alls well that ends well, as Superman drops collects all of the ooze and drops it back off at S.T.A.R. Labs for further study. 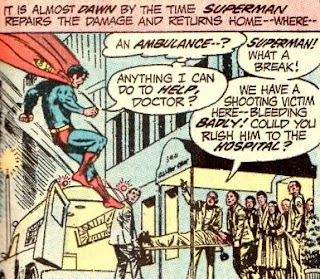 After repairing the damage that the creature caused, Superman returns to his apartment where one of his neighbors has been shot in a case of mistaken identity. I guess it's convenient that he returned to his apartment still in his Superman costume and not as Clark Kent, as he is able to rush Mr. Jenkins to the hospital and save his life.

Another crisis averted, and Clark even gets to be a bit of a no-it-all as he returns to his apartment for some good old "I told you so" comments directed at his trigger happy neighbors.

Obviously, the lesson stuck with all of the impressionable youth of the early 70's as our planet has never been cleaner and more pollution free than it is today!

Well that's the first installment of our three-part post for Superman #246! Click on over here for the second part, as we learn about The Fabulous World of Krypton!

All characters and artwork reproduced are (c) DC Comics
Related links for your surfing pleasure...
Posted by TomO. at 12:23 PM