I talked briefly the other day about the Dark Horse's plunge into superhero comics with their Comics' Greatest World line, but there were only two titles that I ended up collecting out of that imprint.

The first one was X, but I didn't last more than a year with that one. I just looked at my database to double check and noticed that the first issues were drawn by Doug Mahnke! He's been a favorite of mine since he and Mark Schultz had one of my favorite modern Superman runs with their work on Superman: Man of Steel. I had absolutely no idea that I had some work by him from before then. I know that he had done other work for Dark Horse with The Mask, but this is a good find that I may have to go and dig out of the longboxes.

The other title that I collected from this imprint was Ghost. This one I remember enjoying quite a bit, although if that was because of just the art alone...that I can't remember. The art initially was done by Adam Hughes, and you know that any book drawn by him featuring a female lead antagonist is going to look good, at the very least. It's been a long time since I've read some of his earlier stuff, so I'm curious to see how it holds up.

While I had my database open, I checked out my listings for Ghost and found out that Ivan Reis pencilled some issues of this series too! I'm going to sound like a broken record here, but Ivan Reis has been another one of my favorite artists since his work on another Superman book from a few years ago, Action Comics. I can't say it was one of my favorite Superman runs (sorry Chuck Austen), but it sure looked pretty. Damn, I almost wish The Randomizer had picked one of his issues instead. 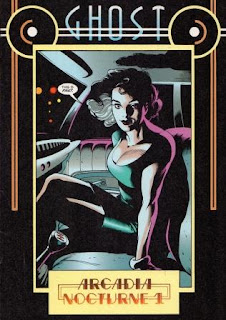 The book begins with a gorgeous opening shot of a beautiful dame in a classic car. I said "dame" because the mood of the page instantly makes me feel like I'm watching a classic film noir movie from the 40's or 50's. The art deco framing and fonts adds to the atmosphere and really pulls you in.

Yup, Adam Hughes has always been that good.

In fact, that's something else that I remember liking about this book that I didn't realize until I saw this page again, and that was the feel of the city that it takes place in. Arcadia was a city that seemed ripped out of a Raymond Chandler book, but with all of the rough edges smoothed over. It was still dirty and gritty, but by giving it a slight art deco feel, it really made it seem like anything could happen.

The lady in the car is none other than Elisa Cameron, a.k.a. Ghost. In trying to track down her sister, she has come upon a real slimeball of a predator who was also looking for her. 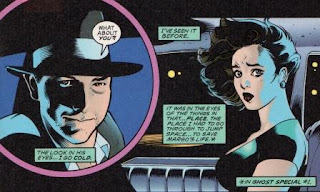 It seems her sister has spiraled into the world of prostitution and pornography and this guy is her first decent lead in trying to track her down. It turns out that this guy is too creepy to be of much use, so she uses the old "jam the stick shift while turning intangible" trick, crashing the car and killing him in the process. 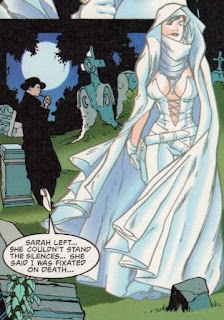 After a depressing visit with her parents, who are both in rehab, Ghost tries to cheer herself up by visiting the local cemetery. She eavesdrops in on the conversation of a fellow visitor and gets the idea that she's going to have to go to the last place she saw her sister, and that's the rubble of her former apartment building. Apparently we missed quite the tale in the previous Ghost special.

It's a lead that pays off, as she finds some rather compromising pictures that her sister did for a rather shady modeling agency, tucked into the back of a burned out filing cabinet. 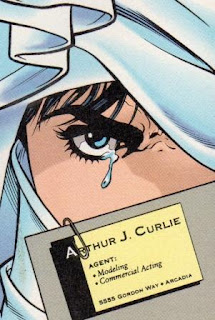 Adam Hughes does a really good job with the full splash page of the discovery, but in trying to keep this blog beneath an R rating, I'm going to refrain from showing 90% of it. As a consolation prize, whatever the panel I am reprinting lacks in raciness, it more than makes up for with quite an emotional punch.

After a brief visit with Mr. Curlie, she finds the location of the movie set where her sister is shooting her first starring role.

I guess the politest way of describing it, is that it's an "underground art film of normal/paranormal grappling." I guess you gotta start somewhere, eh? 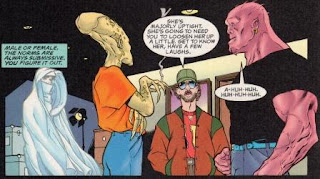 So I wonder what the storytellers are trying to say by casting Steven Spielberg as a small-time, pornographic movie director? 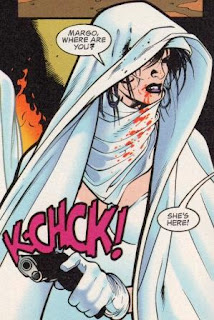 Ghost has seen enough, and after her sister emerges from a back room in a slinky little black number, she begins to shut down the production. This being a book about a vengeful ghost with a pair of automatics, she manages to do it in style.

The paranormal "talent" give her a few good wallops, but she soon has them down for the count only to find that the director now has a gun pointed at her sister's head. Ghost, however, has one more trick up her sleeve.

She also has the power to access another dimension, giving her the ability to reappear in the real world in a different spot in the blink of an eye. 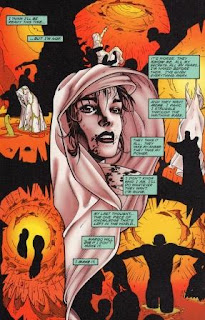 The fact that the dimension that she has to traverse through is populated by faceless, black shadowy demons just makes the journey that much more harrowing. Summoning every last ounce of her determination, she makes the journey and re-emerges into the real world directly in front of the director and his hostage.

Before he can react she touches his hand, turning it intangible and causing his gun to drop to the floor. With her sister now saved, she ties up the director and leaves him at the mercy of the demons that emerge from that same dimension as she makes her exit.

So far, in the last four and a half months, we've read and reviewed 33 different books. This one, without a doubt, has been the most beautifully rendered. Adam Hughes is a true master of his craft. The fact that his work looks as good 15 years ago as it does today, just makes me more depressed that we don't see any interior work from him anymore. Yeah, we got All Star Wonder Woman supposedly coming sometime this decade, but 2009 is almost over and there hasn't been even a hint of a solicitation.

This book is so gorgeously pencilled that I had to restrain myself from posting more panels than I did. I probably should have just reprinted the whole thing in lieu of my (relatively snark-free) review. It probably would've been more entertaining for you, but definitely more unethical for me.

Adam Hughes is one of those artists that you take whatever output he manages to give you. If you've never seen any of his work on Ghost, it's definitely worth doing some back-issue hunting for.

The story by Eric Luke is entertaining enough, but it does have the misfortune of trying to grab whatever attention is left over from Adam Hughes. This particular story reminds me a little of The Big Sleep, with Ghost playing the role of both Humphrey Bogart and Lauren Bacall.

I think we can chalk this one up in the win column, and here's hoping we haven't seen the last of Ghost on this blog. As always, that will be for the almighty Randomizer to decide...

All characters and artwork reproduced are (c) Dark Horse Comics

Related links for your surfing pleasure...
Posted by TomO. at 11:56 PM