I've followed Spider-Man off and on for the last couple of decades. I remember one of my first issues that I bought off the rack was a McFarlane issue during the Assassination Plot storyline. I think that had to be right around he time where he left the book, as most of my early Spider-Man memories are with Erik Larsen and Mark Bagley artwork.

I have all of the Erik Larsen issues and really enjoyed his run, so when Mark Bagley took over next it was no big deal as his style complimented Larsen's at the time. I stuck around for a while after that, but I don't remember too much if I really enjoyed them, or if they were any good. What I do recall is their being a lot of gimmicks around this time.

Needless to say, it wasn't too much longer before I bailed on the Spider-Man titles for close to ten years. So long story short...was the Bagley run any good? There was so many gimmicks that I can't remember the actual substance.

Though there is only one way to find out...

Just who exactly Alistair Smythe is, is never made abundantly clear in this issue. I have no recollection of his name, nor that of the Ultimate Spider-Slayer, so either my memory is really shot or he never quite caught on. My guess is that he was a minor character in some fashion over the previous couple of years, who somehow blames Spider-Man for his predicament and is now taking his revenge on him. But again, that's just a guess.
Smythe has recently escaped from incarceration, and brought some of the asylum inmates with him to help design robotic spiders with which to get his revenge on Spider-Man. If it were me, I think I'd rather want revenge on whomever designed that rather unfortunate looking robo-chair.
Meanwhile, back in Forest Hills, Peter Parker and Felicia Hardy are returning to Aunt May's house after defeating a robotic spider last issue. Peter's parents, who have recently returned from the dead, are being led into a car by the F.B.I. Something doesn't sit right with Peter, so he throws a spider tracer on the car so that he can follow them later. 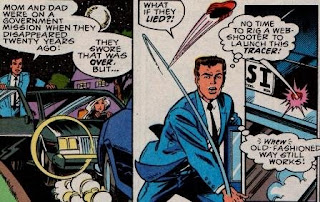 I don't think Peter's going to need it however, as my guess is that the F.B.I. agent's not going to be too hard to find. If he didn't seem to notice a car practically bump into his rear fender, with a grown man emerging and rather dramatically throwing something at his car...he's probably not going to be driving in zig-zags trying to lose any tails. Hell, he's probably got a sign on the top of his car that says "FBI Driver in Training".

After getting the runaround from the local F.B.I. office, Peter decides to follow up as Spider-Man with the Black Cat along for ride (or swing). This is the first panel we get this issue of Spider-Man in action, and Mark Bagley does a bang-up job with a nice looking panel. Nothing flashy, but it sure is pretty nonetheless. 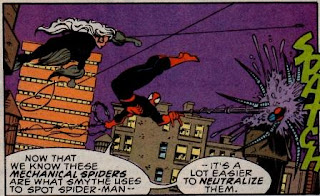 Did I mention that we are on part five of a six part storyline? Because this next panel has me slightly confused. Spider-Man and Black Cat are swinging through they city as Spider-Man reaches out and webs a giant mechanical spider. He comments that

now that we know these mechanical spiders are what Smythe uses to spot Spider-Man -- it's a lot easier to neutralize them.

Really? It only took you five issues figure out that maybe the giant mechanical spiders you keep running into are tied into Smythe's master plan? It seems rather obvious to me, and I just jumped into this story 5 pages ago!
Well they don't go three more panels before they find another one. They move in for the attack, and are ambushed by a robotic Tarantula and Scorpion. They do battle for a couple of pages, and just as Spidey and the Black Cat think they got 'em on the run, they pull a Voltron and come back as one giant spider-robot.
A little team-work is called for as Black Cat uses her claws to carve out a gash wide enough for Spider-Man to shove some live electrical wires into the giant robot's belly. It's insides are fried and melted, and victory comes...but at a price. The Black Cat got too close and took part of the electrical charge. She decides to stay back and recover some, as Spider-Man presses on to find his parents.
Peter ditches the Spider-Man costume, so as to not attract anymore unwanted gigantic robotic spiders, and trails his parents to an abandoned meat packing factory. They are being held at gunpoint by the F.B.I. agent, who is busy giving his monologue about his master plans and how the Parker's have messed it up. It involves a fake red skull and faked deaths and double crosses and I actually got bored trying to make heads or tails of it. Let's press on. 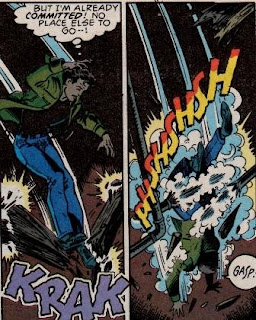 Obviously, the best way for Peter to overhear all of this was to listen from the wooden rafters above them. Did I mention that this was an abandoned warehouse? I'm sure it's been a while since any maintenance was done on those rafters. I wouldn't put my whole weight on those if I were you, Pete. Whoopsie!
Peter falls to the floor, reluctant to use his powers to save him so that he doesn't give away his secret identity to his parents. That wasn't the wisest of moves, as he falls through some pipes carrying Freon, freezing him just enough that he can't move to get off of the conveyor belt that is inching him towards the fully ignited rendering furnace. Did I mention that this was an abandoned meat packing factory?

Maybe this double-crossing F.B.I. Agent isn't so hapless after all, if he can fire up a blast furnace in an abandoned factory.
We'll have to wait until next issue to see how Peter gets his way out of this one, but before we go we have the back-up story to read.
Punch...Counter-Punch
We open up with Peter and Flash Thompson decked out in protective gear facing off, ready to spar in a boxing ring. It only took 364 issues, but here's the rematch from their last sparring match.
Peter called Flash up to talk about his feelings about his parents suddenly reappearing, and what better venue to have a little emotional heart-to-heart than in the middle of a boxing ring. What do I know, as it only takes six pages for them to work out Pete's problems opening up to his parents, as well as getting to the bottom of why Flash bullied Peter back in high school. 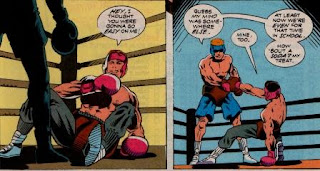 Peter gets sucker-punched during a tender revelation by Flash, but I guess that's alright as they're even now. The story ends with a panel that guarantees you're reading a comic book with the Comics Code Authority stamp of approval on the cover, as they go and get a soda after the big rematch!
SO, WHAT DID WE LEARN...
Well, this was a lot more pedestrian than I remember this run of Spider-Man being. In fact, the writing was down right boring. This was a more serious Spider-Man than we're used to as well. Not to many one-liners or witty rejoinders. He tries, but none of them connect or brought about anything other than a groan. That's a shame, as I recall enjoying Michelinie stuff a little bit more than this. Maybe I caught him on an off issue, and he was saving up his best stuff from this era for the foil covers.
Mark Bagley is also relatively uneven on this issue. His Spider-Man panels are all pretty good and his story telling is spot on. Where I think the issues suffers a little is the acting and expressions of the regular people. It's not bad, it's just that I'm spoiled with the level of quality that he brought to Ultimate Spider-Man some eight years later.
The back-up story was decent enough for a back-up story. It's most notable in this day and age for an early look at Aaron Lopresti's artwork. He got his big break on Malibu's Sludge, which has a cover date of October 1993, so this is definitely some of his first stuff. We'll just be kind and call it a real diamond in the rough. On a side note, his recent work on Wonder Woman has been nothing short of amazing.

Related links for your surfing pleasure...