Everything I remember about this issue is Sin City...Sin City...Sin City. The title had it's birth in these pages, serialized over a year. It proved so popular that Frank Miller put out a series of limited series over the next ten years, eventually culminating into the blockbuster film of the same name.

There were actually quite a few titles that spun out of appearances in Dark Horse Presents including Concrete, Aliens, The Mask, Sin City, and John Byrne's Next Men. There was usually three or four serialized stories that rotated throughout the book. Often they were of varying quality, but there was usually something interesting in there.

This issue contains four stories; one of which I remember vividly, one just barely, and two not all.

This story opens up in the desert as some sort of technology is about to be demonstrated. It's an odd collection of people grouped for the demonstration, as they all appear to be racial or ethnic stereotypes. The man in charge of the weapon, Ed, takes umbrage but is reminded by Barrett, the man coordinating the demonstration, that he works for him and his customers.

As Ed draws closer to starting the demonstration, Barrett sits back in Ed's convertible and turns on the radio. We're at sometime in the near future as the radio plays holographic images of musicians that dance and sing on the dashboard. 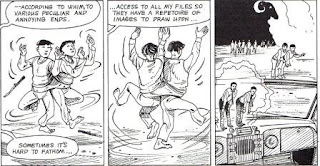 Taking notice of this are a pair of Siamese twin boys that begin to mimic the dancing figures. Barrett explains to Ed that he found these boys in the desert, building stone circles and praying.

The dancing session/demonstration is interrupted by some local law enforcement approaching from afar. Everyone but Ed scatters, first and foremost is Barrett who decides to abandon the Siamese twins so he can escape faster. 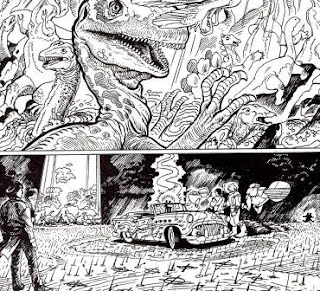 Ed is loathe to abandon his convertible, so he calls on his ship orbiting in space to cast an illusion of a rampaging dinosaur hoard to scare off the local gendarmes.

The only other person who didn't run away or was abandoned was one of the token ethnic characters.

The native American Indian starts speaking in riddles (as they are wont to do) and accepts the technology that Ed was demonstrating. It was apparently some sort of weather controlling device, as it is now pouring rain. As Ed turns to leave, he accidentally drops a heart-shaped locket into one of the circles that the Siamese twins traced on the desert floor. The indian picks it up and speaks in more riddles about friends and enemies.

The story ends as the convertible is carried up to the orbiting ship by some robots, as the rain puts out the campfire on the desert surface.

It's hard to make out exactly what's going on with this story from just this chapter. It appears to be some sort of near future world where technology is scarce and sought after. It's kinda like Doctor Who meets Mad Max. The story was easy enough to follow, there just wasn't much background info given to us in this chapter. The art was serviceable, if not a little rough. I'm probably not going to be digging out the rest of my back issues to see what happens next.

Maybe we'll have better luck with the next story...

So this is apparently the same Dale Eaglesham who is enjoying a fair amount of fame right now, coming off of a two year run of Justice Society of America. I didn't realize that I had any of his art from this long ago. I love his recent work for DC, so let's see what he had to offer 17 years ago. 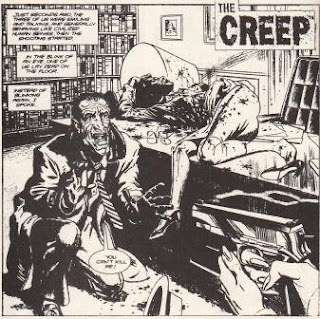 We open with The Creep on bended knee, pleading for his life as he is held at gunpoint by a femme fatale. Sprawled across a desk behind him is the body of another woman, obviously shot to death with the smoking gun now being pointed at the Creep.

What a fantastic opening shot. It's beautifully composed, and tells you everything you need to know right off the bat in just one panel. The line work looks a little rough, almost like it was printed from a xerox of Dale's pencils.

The Creep stalls for time and tells the woman that he still has her birth certificate in the safe back at his office. If she kills him now, the cops will surely find it.

She decides that they will walk back to his office so she can get her stuff from his safe. On the way there, the Creep puts it all together in his head and we find out that the dead woman was her mother. The Creep was set up to find her so that the girl could kill her, leaving the Creep to take the fall for her murder. We never do find out why the woman wanted her mother dead. I'm assuming that is probably addressed in an earlier chapter. 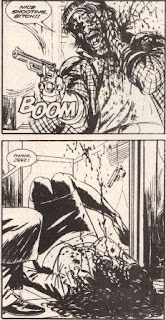 When they get to his office, they are surprised by two burglars who just happen to be stealing his safe. The woman yells at them to stop and is drawn into a shoot-out. She's a decent shot, hitting one of the thieves in the neck. Unlucky for her, he's a better shot. She falls, dead before she hits the floor.

The cops eventually show up to secure the scene and a police sergeant and the Creep get into a conversation about him being a private detective. This story is apparently early in his detective career, as the sergeant has a sort of "I told you so" moment about the level of danger he will encounter in this line of work.

It turns out that the detail about the safe was a bluff, as the Creep reveals that he has no idea what's in it, as it was there when he rented the place.

We end with the Creep telling the sergeant the one thing he has learned from this experience...tomorrow, he's going to get a gun. 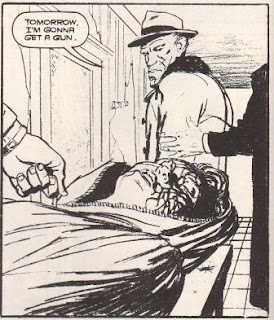 What an awesome story. I love that final panel with the Creep looking over his shoulder as they zip up the woman's body bag.

I'm definitely checking out more Creep stories, as this one was really good. If this was a done-in-one story, it was just about perfect. If it was part of a larger story, they recapped enough that I was able to follow along perfectly.

So we are now one for two with the stories we've read so far. Let's see what the next tale brings...

This story opens up with two wizards playing poker over a huge pile of gold coins. Uchi-Umi explains how he has found a spell to change his appearance to that of his youth. He smiles as he lays down four kings. Mikio counters with five aces? Apparently he cheats too well. Uchi-Umi casts a spell transforming him into a gargoyle. 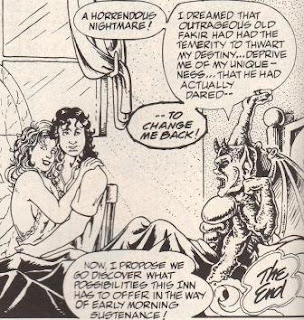 He rethinks his decision and begins to cast another spell as Mikio wakes up from a deep sleep. He was apparently dreaming the whole thing. He is joined by two companions who burst into the room after hearing his screams. Mikio really is a gargoyle after all...and he's hungry.

I really don't know what to make of this story. There's obviously a whole lot more going on here than we get in these four pages. The art style isn't really my thing, as I prefer my wizards a little less Harry Potter and more Gandalf the Grey.

We're now one for three with the stories. It's up to Sin City to even the score.

Remember what I said earlier about certain panels of this story being burned into my brain? Well this was one of them. A comatose Marv falling headfirst from the darkness to the light at the lower corner.

This is Frank Miller at his best. Sometimes his style can be over the top, but here his words and pictures come together to create an exceptionally hard-hitting and stark portrait of Marv and his single-minded obsession to catch the killer of his "girlfriend".

Marv wakes up to find himself a prisoner of Kevin, the sadistic cannibal who has taken the life of his Goldie. Lucille, his drop-dead gorgeous parole agent, has been captured as well. They both share the cell with the mounted heads of his previous victims. 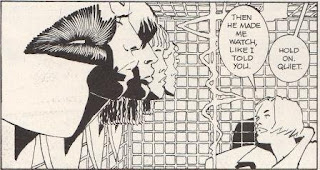 Lucille recounts how Kevin made her watch as he cooked her severed hands and ate them in front of her. She breaks down and finds solace in the strong arms of Marv. Kevin, meanwhile, is outside enjoying the sounds of her anguish.

They begin to piece together what is happening and who is really pulling the strings. Lucille let's it slip that Goldie was a prostitute. Marv seems non-plussed, concentrating instead on breaking the bars of their cell.

This chapter ends as Marv looks out the bars of his cell to see a car pull up and someone yells out for "Kevin." It's the first time that Marv has heard his name. 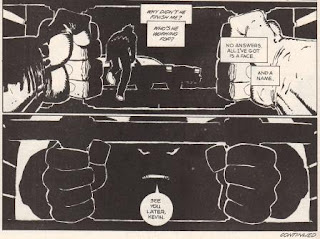 I never get tired of reading Frank Miller's Sin City stories. Every time I read them I rediscover just how good they are. They didn't reinvent the genre like Watchmen did, but they do take it to a pinnacle of storytelling that sets the stage for everything that follows.

When you're dealing with anthology titles, you can count yourself lucky when you get one story that really knocks your socks off. We came out ahead here, as there are two really good stories in this issue. That reaffirms my recollection that this title was one of the better anthology titles, and definitely one of the bright spots of the much maligned 90's.

This issue was good stuff, and I wouldn't at all be disappointed if the Randomizer chose another issue in the near future.