WHAT I REMEMBER: Heroes Reborn was a linewide concept that I remember enjoying. Of the four titles that participated, I remember enjoying The Fantastic Four the most. I'm sure it was mostly due to Jim Lee's pencils, as the scripting was a little rough. I even remember enjoying the Liefeld titles too, although more in the way that you enjoy a good train wreck when you're not actually driving the train.

The only other thing I remember, is that I recall they had Reed Richards and Dr. Doom working together in the same think tank from the beginning. I always liked that idea. For all I know that's the way it was in the 616 universe as well, as I've never read any of the classic Lee/Kirby 104 issue run.

All right, enough rambling. Let's get to it.

We open up with Alicia Masters being stood up for a date with Ben.

By the way, the Silver Surfer called...he wants his shirt back.

Ben is obviously away on a mission with the Fantastic Four, which we get to on the very next page.

The big bad for this storyline is the Super Skrull. This isn't your Secret Invasion style Skrull, as Jim Lee has buffed him up to Hulk like proportions. He's also made him look a little more monstrous, which suits his style pretty good. The one re-imagining that I like is that they gave him the Power Cosmic.

How did that happen, you may ask? Lee and Choi definitely adopt the adage that "every issue is some body's first issue" as they break down in four panels everything that's happened up to this point.

When was the last time you read a modern comic book that spelled everything out so linearly.

I love how each different character takes a part of the recap as well. That's choreography that would make some musicals jealous. On a side note, I understand why the Torch's dialogue balloon is red and orange, but why is the Black Panther's dialogue colored blue?

The Super Skrull starts to take on both The Fantastic Four and Dr. Doom at the same time in a nice two-page spread. Doom talks a big game about regaining the cosmic power that he claims is rightfully his, only to have Super Skrull overload Doom's circuits, putting him out of commission.

The Skrull does the typical villain bloviating and explains to Reed that this is about revenge against the Silver Surfer and Galactus, who were responsible for the destruction of the Skrull homeworld. No big redesign on either the Surfer or Galactus...if it ain't broke, don't fix it. 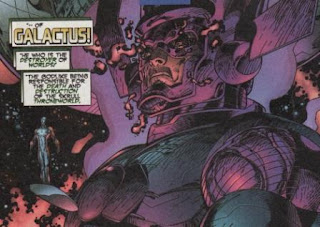 Over the course of the next few pages the Thing, the Human Torch, and the Black Panther keep the Super Skrull distracted while a revived Dr. Doom and Reed come up with a plan to steal back the Cosmic Power. This involves using Black Panther as bait and channeling the Power Cosmic through one of Sue's invisible tubes back into the Silver Surfer.

I wonder if he's pissed because the Super Skrull stole his Power Cosmic or because Alicia Masters stole his shirt?

The Silver Surfer and the Super Skrull have their tete-a-tete, which abruptly begins to destroy Castle Doom. Doom explains that the reactor core is going to blow, and I quote...

I must do what I can to salvage the reactor core. But should a single innocent Latverian die today...I will hold you and the other members of the Fantastic Four personally responsible!

So what does Reed do? Does he push Doom aside and fix the reactor core single-handily? Hell, does he already have it fixed? No, he just makes his body into a slide for the rest of the FF to escape the castle on.

It wouldn't even be that lame of him, if he didn't say this just two panels later...

I doubt that even Victor could have [shut down the reactor core] so quickly.

It's revealed a couple of panels after that that the Surfer was the one who used his powers to seal the reactor, but it's good to know that Reed is there in a pinch when you need him.


The second story in this issue picks up with Doom after the destruction of his castle. One of his Doombots interrupts him with some important news.

Apparently the Avengers and their mansion have been destroyed...You think Marvel would have known better than to give the editorial reins over to Rob Liefeld and his studio.

Doom soon discovers that it is the Hulk that is responsible for the destruction of Avengers Mansion. He uses "the world's most advanced computers" to deconstruct the image of the Hulk and is shocked to see the Hulk is none other than one of his old Atomic Knights of the Round Table compatriots, Bruce Banner.

So shocked is he, that he inexplicably does his best C-3PO imitation..."We're

We then get a brief history of the Atomic Knights, specifically focusing on Victor and Bruce's disagreements about the proper use of gamma radiation. This was one of the few things I actually remembered about this run, and the idea that Victor, Reed, Bruce and Tony Stark were part of the same think tank was a novel idea, I thought.

One thing I didn't remember, was the addition of Rebel O'Reilly. Who the heck is Rebel O'Reilly? Google is no help, so I guess I'll have to do some more reading to find out.

The prologue ends with some villainous laughter from Doom, as he plans to watch his former allies tear each other apart, leaving the world ripe for him to take over.

Visually, the book holds up quite well to today's standards. This was Jim Lee at the height of his popularity, and if anything he has just gotten better.

Storywise, it's a little light. Everything from the previous five issues gets wrapped up in half of this issue. The scripting is a little rough, and I question some actions now and again...but this was Jim Lee re-imagining the Marvel Universe, so for all I know he nailed it exactly like he wanted to.

Overall, I still have some fondness for this Marvel event. Am I going to pull the rest of the issues out and reread them? Eh, probably not...but if the randomizer ever pulls another Heroes Reborn issue to be reviewed, you can bet I'll look forward to it.

All characters and artwork reproduced are (c) Marvel Comics
Posted by TomO. at 10:59 AM