There's not too much I remember about this series, other than the fact that at the center of it all was Access. And for the 99% of everyone out there who has never heard of him, he was the character that kept the Marvel and DC universes from merging again...or was that Joe Quesada.

Anyway, I think by this point the Marvel/DC crossovers were just becoming a money grab, not really motivated by a need to tell any great story. The first series was more novelty than story, but it was fun and interesting and new for the time. It had been a while since we had seen any crossovers between the two companies, so a new generation got to answer the age-old question of who could beat who.

Of course, by the time it was all over we had three mini-series and two dozen one-shots all over two years or so. That's "zombie cover" level saturation, and quarter boxes haven't been the same since.

That's not to say that some of the one shots weren't good, as I remember enjoying a couple of them. Bruce Wayne Agent of S.H.I.E.L.D. with art by Cary Nord...Karl Kesel and Mike Wieringo on Spider-Boy...Mark Waid and Dave Gibbons on Super Soldier...

Fortunately for us, Kurt Busiek and George Perez would eventually go on to show how great an intercompany crossover could be with JLA/Avengers. If you're only going to read one crossover, make it this one. Better yet, try to track down one of the great oversized hardcover collections, as Perez's artwork really shines in an enlarged format.

But we're not here to look at that book, so let's just get started and get this over with.

The Crossing! This issue is basically one big slug-fest, so let's cut right to the score card. 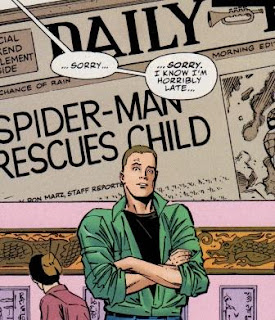 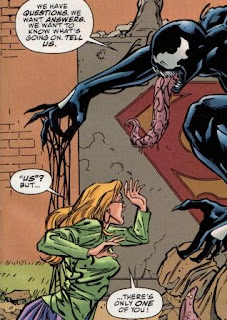 An over-exposed, 90's era Venom escapes to the DC Universe... 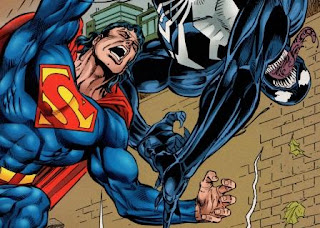 WIN: Marvel
So three rounds in, and Marvel is beating DC with the score 2 to 1. It's still early, so let's see what DC does to regain the momentum.

WIN: The reader...I guess?
And what are you looking at, Superman statue head? Let's keep your head in the game, shall we? 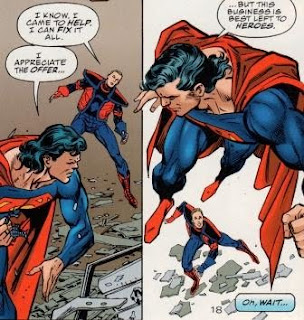 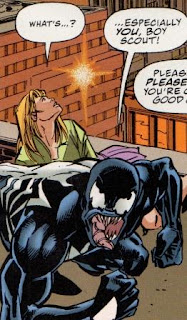 WIN: Marvel
At the end of the sixth round, Marvel maintains a slight lead with the score 3-2-1. 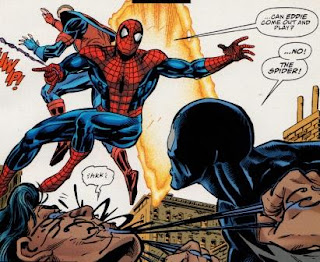 Superman needs a save from Spider-Man... 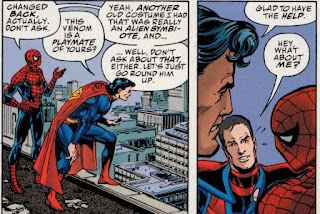 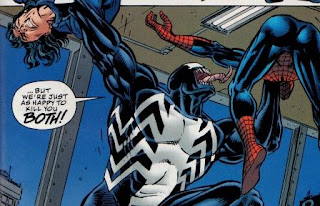 Venom gets the upper hand on both Spider-Man and Superman at the same time..?

WIN: DC
DC gets that last point by default, as you would expect Spider-Man to be able to take Venom down at this point on his own. The fact that he can't seem to do it with Superman's help, for god's sake, costs Marvel a point.

So that makes the score 4-3-2, with Marvel barely holding the lead over DC with the reader coming in third.

Let's head to the final stretch to see how it all shakes out. 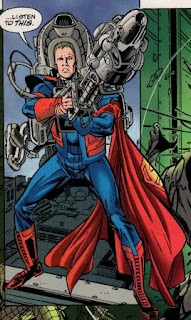 WIN: Marvel and DC
Technically, Access is jointly owned by both Marvel and DC so they can both claim a point here. Then again, Marvel and DC's most popular heroes had to be rescued by a character created to sell a 90's event, so I should really be subtracting a point.

That makes the score 5-4-2, with Marvel still leading. 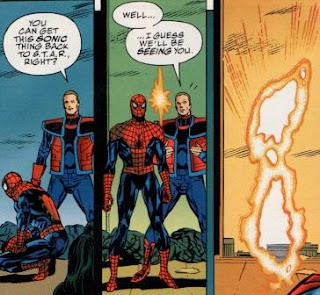 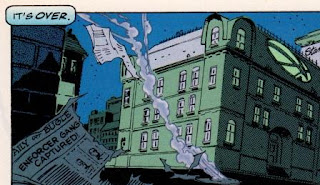 WIN: The reader, without a doubt.
Not so fast... 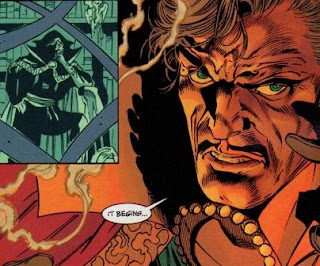 WIN: Definitely not the reader.
SO, WHAT DID WE LEARN...

Let's tally up the final score and see how everything panned out. I think that's pretty much a snap shot of the comic industry in the 90's.

Marvel and DC hog the market for just about all that it's worth, leaving the reader with little to nothing to grasp on to for entertainment.

Ron Marz and Jackson Guice try their best with this series, but in all honesty, I just didn't sense any passion here. It was a by-the-numbers story that doesn't do much to grab the reader.

It's got all the big splash pages you'd expect from a Superman/Spider-Man/Venom fight, but not much else.

All characters and artwork reproduced are (c) Marvel and DC Comics

Related links for your surfing pleasure...
Posted by TomO. at 8:10 AM