The 70's was an awesome period for The Avengers. For me, it doesn't get any better than this. The stories were fun and fantastic, and moved at a frenetic pace from issue to issue. If that wasn't enough, you had the likes of Neal Adams, George Perez, and John Byrne contributing to the artwork. It was truly a golden age for The Avengers.

The Randomizer gave us a treat with this pick, as it features artwork from John Byrne, with a story focusing on Hawkeye. I can't wait, so let' get right down to it.

Wings And Arrows!
The story opens up after The Avengers have vanquished the villainy of Arsenal!

Yeah, I had to look him up too. 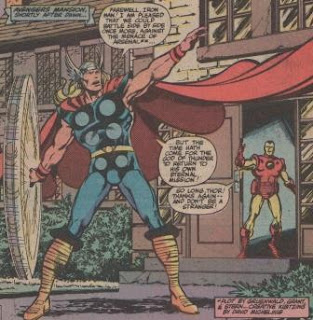 I was looking at this opening page and admiring John Byrne's pencils, and I realized that he never really drew Thor on any sort of consistent basis. Or at least not that I ever remember. It's a nice opening shot, and I suppose if I never really got the chance to draw him, I'd put him in the classic hammer twirling pose as well.

Thor barely sticks around for two pages, as he is off to Asgard to deal with those pesky Celestials.

Iron man, ever the polite host, waves him off from the front door of Avengers Mansion.

So caught up in his thoughts on the troubles that await him in Asgard, he nearly flies into The Falcon, who is returning to the team after a leave of absence to deal with a personal case. 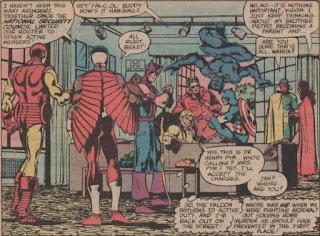 The Falcon arrives to a bit of a full house, as all of the heroes from the last adventure (minus Thor) are still hanging around. That poses a problem, as this is the period when the Avengers are running under a government charter and their roster is limited to just seven members.

Their government liason was Henry Gryich, and he was quite the taskmaster back then. Since The Falcon is back, one of the others must leave. Unfortunately for Hawkeye, that someone is him. Another unintentional victim of racial quotas.

But it's not like Hawkeye to hold a grudge, eh? Who am I fooling...that's why I love him, as he tends to act first and think later (if he remembers to).

In fact, let's start keeping track of just how much of a badass Hawkeye really is.

Case Study #1 for how awesome Hawkeye is... 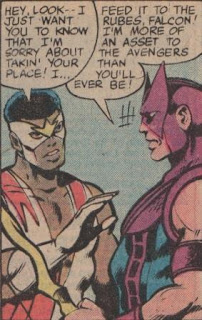 He's not afraid to let the other Avengers know he's better than them...To their face, no less!
Back to the story, Captain America and Falcon head to the control room to check in with Gyrich and inform him that the roster is back down to size. Gyrich lets them know who really holds the leash, as he congratulates Cap for filling out their paperwork on time. 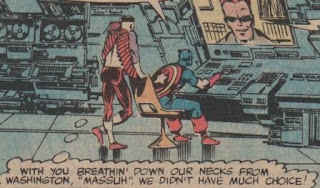 You see, this is why we need thought balloons to make a comeback. Where else would we get a peek into the simmering racial tensions of the Marvel universe.

Hawkeye, meanwhile, has made his way to his rented apartment to lick his wounds after being replaced on the team. He's been looking for a new job, but doesn't have any luck until he decides that maybe it should be Hawkeye, and not Clint Barton, who should be out hustling the streets looking for a new gig. He spies an ad in the paper for Cross Technological Enterprises, who are looking for a new Security Chief.

As Hawkeye is a man of action, not words, he decides the best way to interview for the job is to break into the building himself to show them just how damn good he is. The head of Cross Tech, duly impressed with Hawkeye's initiative, offers him the job on the spot.

Case Study #2 for how awesome Hawkeye is... 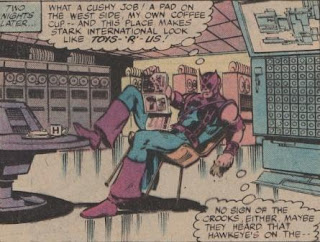 He has a work ethic second to none!
Luckily for Hawkeye, he doesn't have to wait that long for some action as the alarms start rattling about a break in at warehouse 12. He rushes in to find the guards unconscious and a hole burned through the ceiling. Down swoops Deathbird, with a strike of her razor sharp wing that barely misses Hawkeye. 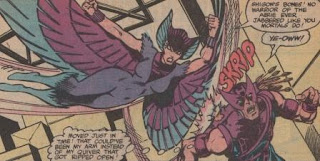 What is it with all of these winged people picking on our boy Hawkeye?

Hawkeye lets loose with a sonic arrow that disorients Deathbird. She pulls out her energy javelins and tries to fry Hawkeye, but he fires a grappling arrow and swings himself up and around, striking her from behind.

Case Study #3 for how awesome Hawkeye is... 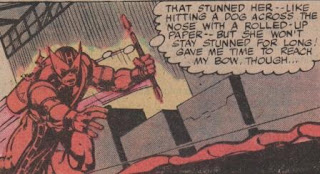 He knows how to keep the ladies in their place!
Sensing the battle is going against her, Deathbird resorts to a more direct attack and throws her javelins directly at Hawkeye. She connects with his shoulder, sending a shock to Hawkeye that paralyzes his arm. Unable to use his bow, he takes an electro-arrow and hurls it into a nearby fusebox. 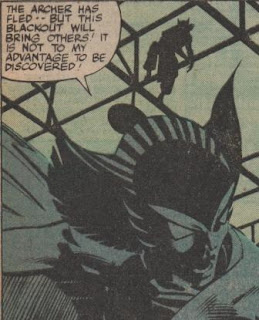 In the darkened warehouse, Deathbird mistakenly assumes Hawkeye has fled. She decides to abandon her quest for the technology that she came to steal.

Why she's so worried that a blackout is going to bring more people to the warehouse, when a full on, no-holds-barred battle between the two of them wouldn't is beyond me. I guess that's why I'm not a galaxy-spanning super villain.

Hawkeye didn't flee, however, and he soon traps Deathbird in a titanium steel net that I guess he found laying around? I can't imagine he was able to roll that netting up tight enough to fit into one of his arrowheads. Although this is the Marvel universe we're talking about, where the laws of physics bend to the demands of the plot. If Captain America can run around with his shield strapped to his back under a suit jacket, anything is possible.

The regular security detail for Cross Tech Enterprises soon arrives and takes Deathbird into custody. Deathbird yells to him that she will not forget this encounter, as she is being led away.

Case Study #4 for how awesome Hawkeye is... 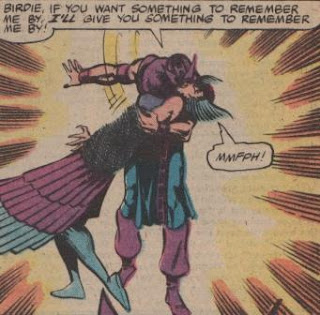 He knows what the ladies really want!
But wait, he's not done yet...

Case Study #5 for how awesome Hawkeye is...

He wears the pants around here!
Finally, back at Avengers Mansion, Henry Gyrich has paid the team a personal visit to inform them about more membership stipulations. It seems the Scarlet Witch wants a leave of absence, but Gyrich ain't having it. 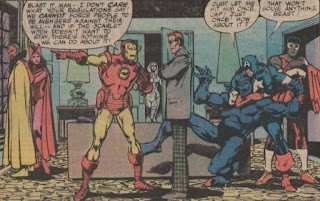 It's just like Iron Man to take a stand against the government when it tries to impose it's will on who can, or can't be, a super-hero.

I know I feel safer knowing that a stand-up guy like Iron Man has my back. Right Cap?

Just because you're a world-famous Avenger doesn't mean that you can't take the time to flirt with the ladies, even if that lady happens to be a galaxy spanning supervillain!

I told you Hawkeye was the man, right? One of these days he'll be back in the purple and blue.

So finally, let's check the facts to see if the cover was just hyperbole, or did they actually manage to cram that much story into just 17 pages.

Why must Thor leave The Avengers? To battle the Celestials, or course.

When will the government stop harassing our heroes? This one's a gimme...never, as long as Gyrich is around.

Who is the surprise super-villain Hawkeye battles alone? Deathbird, making her Avengers debut.

Where does destiny take Captain America and The Falcon? Unless I missed something, the only place destiny took them was to the communications center of Avengers mansion. Hardly worthy of a cover blurb, if you ask me.

Three out of five isn't bad, I suppose. A cover that's 60% accurate as to the contents inside is actually pretty good by today's standards, where the generic cover reigns supreme.