As I mentioned in my previous post, there's not too much that I remember about this issue. It would still be a couple of years before I got into the DC universe in any sort of in depth reading. I suppose that if you're just tangentially reading the DC universe, chances are you're starting with Batman. So it's not that much of a surprise that these are some of my earliest DC books that I bought off of the racks.

The cover is a very striking image by Michael Golden, but it doesn't offer up any clues as to the story inside. It's still pretty to look at though.

Not too much of a preamble today, so let's just get to it...

"And The Executioner Wore Stiletto Heels"

You gotta love that title. I'm getting the impression that we're in for a noir type read. The issue opens up with narration from Batman as he comes across a grizzly scene. The narration reads straight out of a pulp detective novel, so I guess the title is apropos. Lying electrocuted on the floor is Two Tone, a sociopathic Siamese-twin hitman. 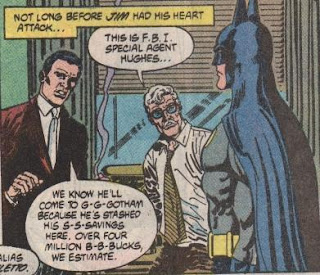 This brings back memories of the last time Batman ran into him, as we go back three months with Batman in Commissioner Gordon's office with F.B.I Special Agent Hughes.

Agent Hughes explains that a contract killer has escaped from Death Row in Florida and is heading to Gotham. Saul Calvino, alias Stiletto, is after money he stashed in town before he got caught. Stiletto is supernaturally persuasive, and was able to talk his way out of prison. This is a scene we don't get much these days, with Batman inside Jim's office being officially invited in on a case. 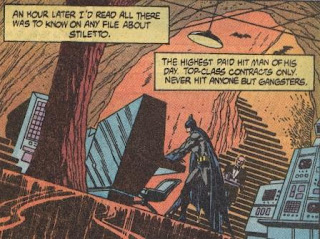 Back at the Batcave, Batman is researching files on Stiletto for any leads on where he might show up. You can't help but laugh at the computers that are all over the Batcave. It seems odd that a comic from the 90's would have computers that look like they were leftover from the 60's. I probably have more memory on my iPod than Batman has in his whole cave. I half expected to see an old reel-to-reel to be hooked up to 'em, spitting out data cards. 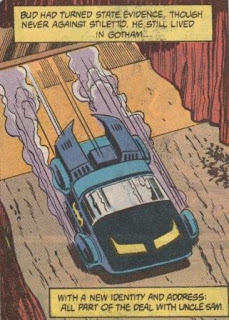 Batman decides to look up Stiletto's old sidekick, The Seventh Seal. The name sounds ominous, but they never do explain the relevance. These days Bud Brown, a.k.a. The Seventh Seal, is in the witness protection program. The fact that he's still in Gotham after he ratted out a bunch of mobsters, makes me think the F.B.I. doesn't have his best intentions at the top of their to-do list. Eh, give him a new name and address and he'll be fine.

Now that's a model of the Batmobile that I don't recall at all. Where's the bat motif?

As Batman nears Bud's apartment, he sees Two Tone running out of the building. 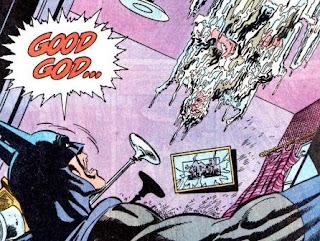 Rushing inside, he discovers Bud super-glued to the ceiling. Apparently, this startles Batman something fierce. To me, it just seems so random and unworkable. Wouldn't Two Tone's hands have stuck to the chair as he was holding it up to the ceiling, waiting for the glue to dry? And it's not like Two Tone has an extra set of hands! Maybe he was able to brace the chair to the ceiling using his extra head, leaving his hands free to apply all that glue. And how does glue fit into the whole Siamese twin theme anyway?

It's all just a trap for Batman anyway, as Bud has a bomb glued to his chest that goes off with Batman narrowly escaping through the window. Alfred patches him back up at the Batcave as he replays the scene in his head. There must be something that he missed.

Of course there was! It wasn't the bomb glued to Bud's chest that Batman should have concerned himself with, it was the book glued to his chest right next to the bomb! For shame Batman, you would think that anytime you find the book "Stiletto: A Social History of the High Heeled Shoe" glued to the chest of the former sidekick for the hitman known as Stiletto, that that would be a major clue.

Now Batman's off to find a copy of the book that isn't glued to a burned corpse. So it's off to the bookstore, naturally...in costume and in broad daylight. It always cracks me up when Superheroes are in everyday situations in full costume. You think it would have been less conspicuous to go book shopping as Bruce Wayne.

Of course the bookstore had a copy, in fact they had three copies! Who knew the history of the high heel was a book stocked more than one copy deep at your local book store. It's revealed that F.B.I. agent Hughes also bought one of the copies earlier in the day, so Batman is off to confront him.

The book, it turns out, was the cipher that Bud used to hide Stiletto's cash. Batman finds out that he has been played as a pawn by Agent Hughes in a larger scheme involving South American drug barons. Needless to say, Batman's pissed. He cracks the code and rushes to the bus terminal where the money is hidden.

Two Tone drives a bus through the terminal wall just as Stiletto shows up to get his cash. Naturally a fight ensues. Up until this point, Two Tone has just been seen in the shadows, but in full daylight it's revealed that he is a Siamese twin with one Caucasian head and one African-American head. I guess the name Two Tone makes more sense now. 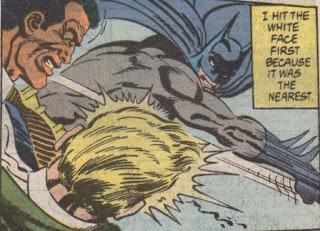 Can you imagine the uproar if you had hit the black face first?

Batman gets distracted by an innocent bystander in a life and death situation. Anytime a kid's life is in danger, Batman does the right thing and abandons the fight to save his life.

How the child's life was threatened by luggage falling off of a luggage cart seems a little overly dramatic to me.

Anway, that's enough of a distraction for Two Tone to get a lucky kick in, breaking Batman's jaw. As he gets ready to shoot a dazed and wounded Batman, a stiletto dagger comes flying from off panel, striking Two Tone in the wrist. So that's how he got his nickname. It beats the alternative of him assassinating people in high heels.

Stiletto takes the opportunity to escape in a bus, with Two Tone in hot pursuit. 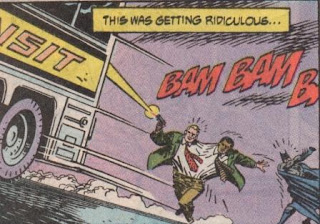 I am inclined to agree.

Batman manages to catch up to the bus driven by Stiletto and is about to apprehend him when Two Tone pushes their bus into the harbor. As the bus is sinking into the murky depths of Gotham Harbor, the two have a discussion about the respective moral implications of how each other have chosen to live their lives. That's a lot of talking for someone with a broken jaw!

Stiletto has resigned himself to death at the bottom of the harbor, but Batman insists on saving him so that he can face justice. They make it back to the surface, only to find Two Tone has disappeared.

Over the next three months, Batman has wrestled with his decision to turn Stiletto over to the authorities as he only ever performed hits on mobsters and killers. The moral dilemma continues however, as the electric chair was not in the cards for Stiletto. He manages to escape the police once again, leaving Batman to hope he never comes back to Gotham.

I love done-in-one stories. When they are done well, they read as exciting and action packed as any six-parter. Even average ones have a decent amount of pay off. This story was pretty decent, if not a little silly. Take away the novelty villain and amp up the drama a little, and you'd have a comic that would still hold up today.

Peter Milligan is a writer that I have enjoyed in the past. This story seems pretty straightforward for him, but it was still pretty good.

The real star of the book is Jim Aparo. I really like his version of Batman, as it includes the yellow oval and the classic utility belt. Whenever I think of Batman, this is the costume that pops into my head.

Overall, this was a decent little story that may not necessarily set the back-issue bins on fire, but you'll at least get your dollar's worth.