I'm pretty sure that this title was one of the last X-Titles that I ever really enjoyed. Grant Morrison's run on New X-Men had just wrapped up a couple of months before, while this title was winding down. It would be the last time I actually looked forward to reading about Marvel's Merry Mutants!

Perhaps I'm being a little harsh, as there have been a couple of bits of good stuff in the last five years. Like Peter David's Madrox mini and one or two of Mike Carey's issues. But the good is far outweighed by issues both bad and mediocre, best exemplified by the storyline whose name I dare not speak for fear that even that will acknowledge it's place in continuity (psst..it's The Draco, but don't let anyone know I told you).

If my fascination with all things X had to end, I suppose Morrison, Milligan, and Allred were the perfect messengers with which to lay them to rest. They both took wildly different directions to tell their stories. Morrison took the core concept and amped it up about 1000%, while Milligan and Allred took the core concept and through it out the window.

I fear that the X-Titles will never be as good as they were at this time. But then I thought that back when Claremont originally left in the early 90's, so hope springs eternal. But for now, let's relive the last great days of the mutants.

The Good And The Famous This issue is part five of five of the big throwdown with The Avengers. All you basically need to know to bring you up to speed is that Doop (the globulous green guy on the cover) was kidnapped. While in custody, his brain explodes and scatters to the far corners of the earth. Fearing that his brain could be used as a weapon in the wrong hands, The Avengers decide that they must track the pieces down. They really don't trust X-Statix, so five issues of wackiness ensues.

The story is told in the old Justice League of America style, with the team splitting up to achieve individual goals, before coming back together. In the previous issues, there was Captain America vs. the Anarchist...Dead Girl vs. Scarlet Witch...Mr. Sensitive vs. Iron Man...Hawkeye vs. Vivisector...Ant Man vs. Venus Dee Milo. I'm not going to tell you who won, as you'll just have to dig your old issues out and reread 'em again (you do have them, right?). 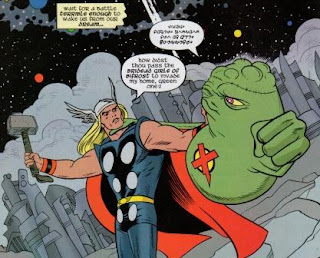 At the beginning of this issue, the Avengers have three pieces of Doop's brain while X-Statix only have two. As you can see from the cover, the last battle is between Doop and Thor.

A piece of Doop's brain has found itself on mighty Asgard. Doop and Venus Dee Milo teleport there to find it, but are waylayed by Thor, who is after the brain for the Avengers. One whack by Mjolnir puts Doop down for the count, while Thor continues his search. 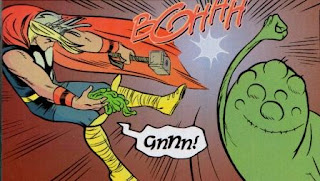 It doesn't take long for the citizenry of Asgard to bring the brain to Thor, but no sooner does he have it in his grasp when he is sucker punched by Doop. Thor wrestles free from Doop's grasp and hurtles Mjolnir at Doop. To his surprise, Doop absorbs the hammer into his body.

Boasting about the taste of Thor's hammer, Doop is unsettled as Thor begins to summon Mjolnir to return to his grasp. Instead of vomiting up the hammer, Doop shows that he is not to be underestimated by regurgitating a horde of hammers. While Thor attempts to find the real Mjolnir, Doop claims his brain as his own once again. 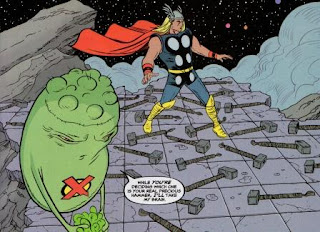 As Thor attempts to summon Mjolnir, all of the hammers begin to rise and rocket upwards, bringing down the walls around them. Doop drops the brain in all the excitement, and it is Thor's once more.

All of the destruction taking place on Asgard has awoken the Fatal Sisters, three long dead valkyriur who have been summoned by the call of battle. And arise they have, trampling the Odinson in their path, causing him to drop Doop's brain.

Doop takes possesion of his brain once again, but if he thought he had regained the upper hand, think again.

Standing in front of him know are the rest of the Mighty Avengers...Captain America, Iron Man, Hawkeye, Scarlet Witch, and Ant Man.

They claim that they are here to help Doop, but only if he surrenders his brain to their custody. While Doop ponders their request (i.e. demand), Thor returns with a grave warning. The matter of Doop's brain will have to wait, for the awakened Fatal Sisters are on their way to earth to reclaim the world of man for Asgard.

They won't have to take them on by themselves, however, as the rest of X-Statix are teleported to Asgard by Venus Dee Milo. In classic Marvel style, the two teams of heroes realize that they shouldn't be fighting each other after all, as a common foe needs their attention. 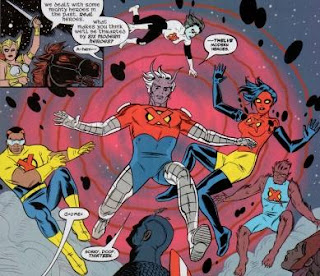 The sheer might of the thirteen assembled heroes convinces the Fatal Sisters that now is not the time for their battle, as they return to their slumber. Wow, that was easy. But things have a habit of never going smoothly for X-Statix. Captain America is impressed by the way X-Statix put aside their differences to help defeat the Fatal Sisters, but X-Statix being X-Statix, they have some chips on their shoulders that need tending to.

The Vivisector is upset that Hawkeye led him on into thinking they had a future together, while the Anarchist pulls the race card against Captain America. Cap demands an apology, but the only one forthcoming from Tike is his fist.

While it would appear another dust-up is inevitable, Doop starts to go into convulsions. It would seem the back-up brain located in his butt is breaking down. Mr. Sensitive convinces the rest of X-Statix to hand over their pieces of the brain, as the Avengers are the more responsible party and they should allowed to look after Doop.

Captain America is impressed once again by their act of selflessness, and allows them to keep Doop in their custody...for now. Cap pays them a compliment by noticing that they're not quite "the devil-may-care, irresponsible, fame-seeking, image-obsessed poseurs" that they've made themselves out to be.

Little does Captain America know, that he just insulted the entire team. Back at their base, X-Statix begin to reflect on exactly what they want out of the team. It seems everyone is just in it for either themselves, or the fame, or both. As it's suggested that the team disband, everyone falls silent. 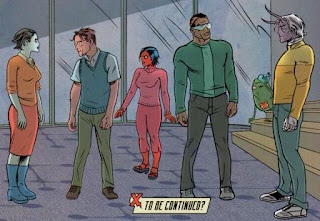 So here's a bonus fact about this issue...it turns out that this was probably the last issue that I enjoyed reading about The Avengers as well. So that makes this issue a two-fer, and it's a damn good one at that.

Peter Milligan gives us another absurdist issue, all the while playing the Avengers relatively straight. So in the end, we get the best of both worlds. I've always enjoyed Milligan's stories when they run slightly askew, and his run of X-Statix definitely fits that bill. Dare I say it, but he actually made us care for this bunch of characters that were basically one-note gags.

Mike Allred's art has always intrigued me, but for whatever reason I could never seem to keep up with his series Madman. The fact that he kept such a high level of quality for 40 some issues of this team, cemented his place in the Random Longbox hall of fame.

He has only gone on to bigger and better things, continually reinventing his storytelling techniques tenfold. Currently, you can find his work in Wednesday Comics, teaming up with Neil Gaiman on the Metamorpho strip. And if you haven't seen it already, you have to pick up issues #8 and 9 just to see them take the Periodic Table of Elements and transform it into a two-page action scene! Action nerds unite!

Rereading this issue of X-Statix reminded me just how good this series was. There's a serious hole in my hardcover collection that is just screaming for an X-Statix Omnibus. I mean, seriously...if they can publish a Secret Wars II omnibus, they can get around to publishing this one too!

All characters and artwork reproduced are (c) Marvel Comics
Posted by TomO. at 12:15 AM