This issue came out over a year before I was born, so there's not a whole lot I remember from when it was actually released. It then only took the better part of three decades or so before it found it's way into my collection.

As I mentioned yesterday, this is one of the imaginary stories that used to appear with some regularity in and around the sixties. If I remember correctly, this one is pretty entertaining as we watch Superman deal with his grief over the loss of his wife, Lois Lane.

Now before you start calling for my head on a stake for taking pleasure in Superman's loss, you have to remember that this is a Superman book from the 60's. You know he'll be making some questionable moral and ethical decisions. 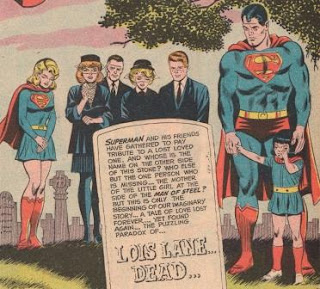 The story opens up as Lois' closest friends and family mourn her recent passing.

So how did it come to be that Superman now stands graveside, a devastated man? Did Brainiac or Luthor finally find the way to break Superman once and for all?

No, it took the brain power and foresight of a master villain like the Dimension Master?! Hmmm...can't say as I ever remember coming across him before now. I guess he's kept a pretty low profile while perfecting his ultimate crime (and by the look of his outfit, working summers part time at the renaissance festival).

His master plan involves shooting Superman with his Blast-Ray, hoping to scatter his atoms to the winds. Unfortunately, the blast ricochets off of Superman's chest and strikes Lois. In a puff of smoke, she was gone.

Now Superman is left to cope without his wife, while also having to raise their daughter, Laney, all by himself. Needless to say, Superman makes some rather odd parenting choices. Without further ado, let's take a look at Superman's fool proof plan for finding love and happiness again in ten easy steps.

#10. It's never too early to make your kid feel like an orphan 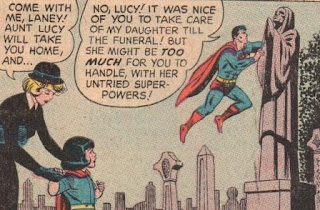 This one's a two-fer! After the sudden loss of your mother, what child would not want to then be separated from her father until after the funeral? And as a father and a husband, how could you not want to be even closer to your kids after such a tragedy. Ah well, grief does strange things to people.

#9. Who needs to make sure your Fortress of Solitude is safe for a toddler when you have a robotic babysitter 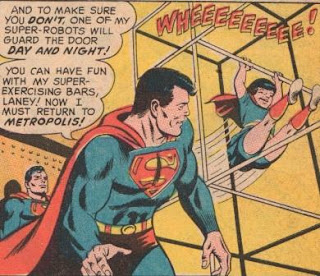 Once settled in to the Fortress, Superman lets Laney play on his super-exercising bars...right in front of the one door she should never open! Well, it's not like he'd ever do anything foolish like leaving his kryptonite samples right next to where his half-Kryptonian daughter is playing.

#8. The only thing better than a robotic babysitter is a dog 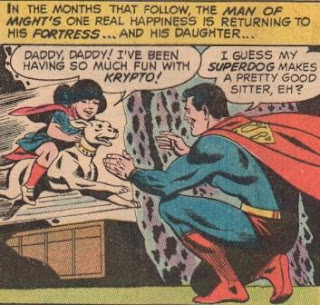 While continuing his secret identity as Clark Kent, reporter for the Daily Planet, it's left to Krypto and the occasional robot Superman to babysit little Laney. I don't see anything wrong with that.

#7. Artificial intelligence is better than nothing 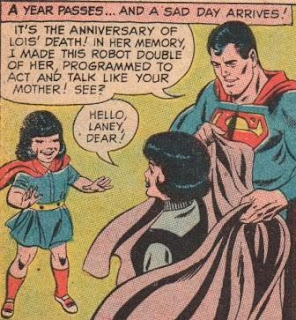 #6. Artificial love is better than nothing 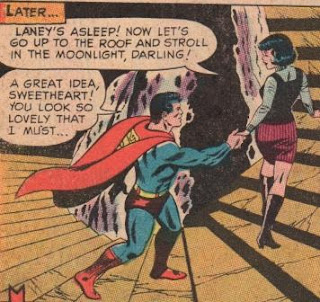 So that's why you built the robotic Lois, eh Clark? Even a superman must get cold and lonely at the Fortress from time to time. Unfortunately for him, her battery life fizzles out five panels later.

#5. If you thought robotic Lois was fun, wait until you meet parallel world Lois

So remember that door that Laney wasn't supposed to open? Well she did, and guess what? There was red kryptonite back there after all. The exposure to it sent Laney to another dimension. When Superman follows her there, he finds that the Lois of this world is still alive! 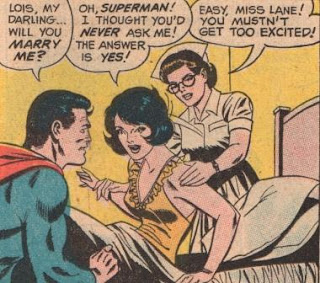 After saving this world's Lois from a giant octopus (don't ask), Superman proposes at her bedside. I'm sure she'll be all right knowing that she's a replacement Lois for a Superman that's not even from her dimension.

#3. It's always best to wait until after the wedding to introduce your wife to the daughter that you had with the parallel version of herself

Well that's one way to introduce your daughter to her new mommy, and vice versa.

#2. Or you could just keep everyone in the dark and hope for the best 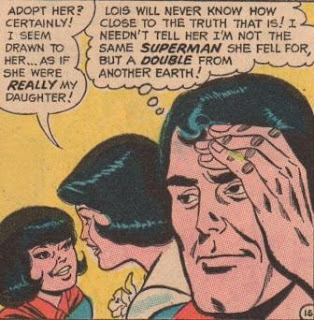 What could possibly go wrong with this plan? It's not like Lois is a whip-smart, investigative reporter who uses her skills to piece together stories that people more often than not don't want told...

Well, it's not like Laney is a precocious six-year old, and they never catch you off guard asking uncomfortable questions...

Yeah, I foresee some problems in the near future.

#1. Live happily ever after knowing you just pulled one over on the people you supposedly love the most 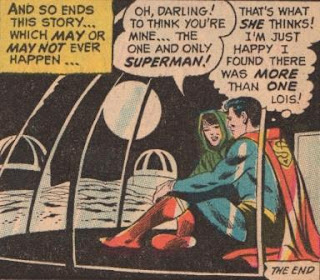 So yeah, happily ever after. Now if he could only find two Lois' who are both alive at the same time! After reading this story, I'm sure Superman's got the skills to be able to pull that one off.

I'm not sure we learned anything, or at least anything useful, in this story.

If you did, I think you may need to re-evaluate how you look at love, parenting, relationships, etc...

At least this issue had a nice Neal Adams cover. In fact, he probably did too nice a job, as it was easily the most emotionally satisfying part of this book. In this case, you definitely can't judge a book by it's cover.

I do have one last rather trivial thought about this issue. It looks like at this point in Superman's history that the writers have started to get lazy coming up with new double "L" names for the females in his world. I mean, honestly...Laney Lane? What if they had had a son instead of a daughter? You just know there's a parallel world out there somewhere with a little Kenty Kent running around.

Click here for the second story from this issue, following the exploits of Superbaby!

All characters and artwork reproduced are (c) DC Comics
Posted by TomO. at 12:07 AM