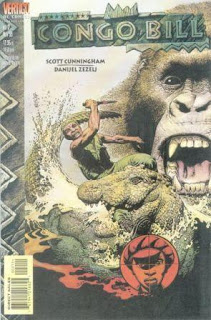 So what were we reading ten years ago this month?

Why, Congo Bill of course.

Or not, as I had no idea that this book existed. And here I thought that James Robinson was being all crazy original, bringing back Congo Bill. Who knew that it had been done ten years ago.

It's Vertigo, so I'm sure he doesn't end up in The Justice League, but I may have to check this out anyway for some of that Danijel Zezelj art. That guy really impressed me with his work on Loveless and Desolation Jones, and I can actually see him being a good fit for this title. 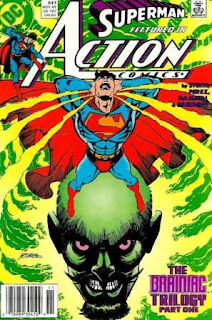 Need something a little more mainstream and superheroey? Let's go back twenty years and see what we find.

Oh...maybe we would've been better off staying in the present.

It's the first appearance of the post-crisis incarnation of Brainiac...reimagined as a possessed sideshow magician.

Nothing strikes fear into the hearts of super-heroes everywhere like good old Milton Fine.

All in all, it's yet another reason to give thanks and sacrifice a longbox or two on the altar of Geoff Johns.

So what book from the past is the Randomizer going to pick for us to review? Let's find out... 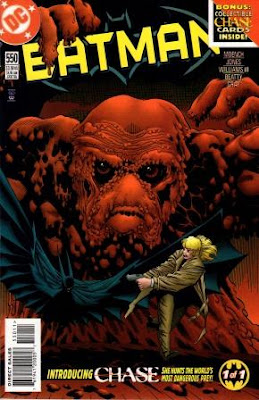 So I've been waiting, and wishing, and hoping that some day the Randomizer would pick an issue of Chase for me to review. That series was way ahead of it's time, and was cancelled way too soon.

Why it's the very first appearance of Cameron Chase! I had totally forgot that she was introduced in the pages of Batman before her series started. The Randomizer has ended up giving me more than I actually knew I ever wanted.

Come back in a day or two for the review, and we'll see if Chase really was a concept ahead of it's time. At the very least, we'll have some pretty pictures from both Kelley Jones and J.H. Williams III to look at.
Posted by TomO. at 11:03 PM