So there's this concept called "the best of intentions."

I had 'em...I swear I did. I seriously didn't think it would take me over a week to get through the six stories in this issue. I mean, they're only 8 page stories...how long could it possibly take to do individual reviews?

The answer? Ten days. Oh well, that's what happens when you have an out-of-state sales conference to attend thrown into the middle of your review schedule. Let's just endeavor to persevere and get the last review wrapped up so we can move on to our 25th issue extravaganza!

Bitter Fruit Part 4 There's something magical about a story that has the innate ability to immediately immerse you into the look and feel of the surroundings with which the story take place. This is one of those stories.

Now normally, you'd be transported directly to the author's imagination through the beauty and grace of the words written on the page, or the style and drama of the artwork rendered. 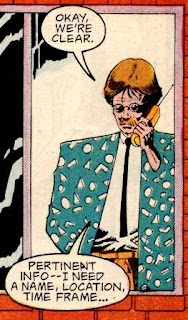 With this story, the creators chose to go with a more direct route to let us know we are smack dab in the middle of the 80's...they decided to whack us over the head with it.

Take a look at the color of that jacket and those shoulder pads...that's pure 80's. Spice it up with a narrow leather tie and an old cell phone brick and I can just hear the Jan Hammer music playing in the background.

So our Don Johnson wannabe is some type of hitman who has just taken his latest assignment. Sometime in the next 48 hours, a federal employee named Ellen Waverly who works for the Department of Immigration and Naturalization is slated for termination.

It would seem that she is handling a case for the family of an immigrant who is in a coma. What makes her a target is that the man in the coma has ties to the corporation that hired the hitman.

We then go to an alley, where a couple of thugs are shaking down an Asian shop owner. Black Canary comes along (at least I think it's Black Canary, as she is never referenced by name and looks absolutely nothing like her current incarnation) and gives the thugs a target who will fight back. She admirably holds her own long enough for the shop owner to get a shotgun and chase the thugs away.

Black Canary then finds out that there was another person with the two thugs at the scene that left before she arrived. It was a man with a cowboy hat who she has apparently had a run-in with previously. She thanks the shop owner for the info and leaves.

What comes next are two pages of benind the scenes corporate shenanigans that I honestly can't make heads or tails of, so that's about all the recap you're going to get. 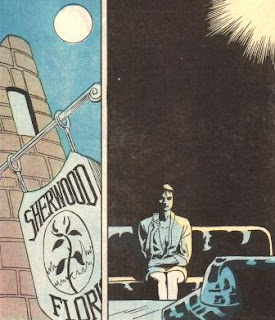 Finally, we arrive at the Sherwood Florist Shop where Black Canary sits in the dark staring at a phone. She finally picks it up and places a call to who she believes the man in the cowboy hat is. She gets his answering machine, and leaves him a message identifying herself as "Bonnie Cardinal."

I suppose it's possible that this wasn't Black Canary after all, but the martial arts and the florist shop lead me to believe that it was, and that she's just now using a fake name.

Irregardless, she informs him that she has a lead on some of the recent shopkeeper beatings.

This story was a mess, and I really don't know where to start. I guess the kindest thing to say about it was that the artwork was inconsistent. Some panels were interesting to look at, but the storytelling and style were all over the map.

DeBurke is not helped by the fact that the story is told in nothing but the vaguest of terms. People are referenced by names and descriptions, but the author is using a storytelling style that makes it very difficult to know who is actually being referenced. Most of the behind the scenes interaction is over the phone and the dialogue is very challenging to keep straight.

We never really get too involved with the story, as the 8 pages are used to drive what appears to be three separate tangents. I'm sure they all relate to each other, but damned if I can figure it out from just this chapter.

Oh well, it's a shame that our rather involved review of Action Comics Weekly #614 had to end on a bit of a downer with the last two stories. Both of them didn't really engage me in any way, shape or form. I suppose that they could read better "in trade", but I'm honestly not at all interested enough to pursue either of them at this point.

All characters and artwork reproduced are (c) DC Comics.
Posted by TomO. at 11:38 PM