Let's have some fun with numbers and statistics. This is the 14th comic book that I've reviewed that was released during the 1990's. Of those 14 books that were released during the heady days of variant, glow-in-the-dark, die-cut, hologram, metal foil, and alternate covers, this is the first one that includes any of those shenanigans. That translates to a little over 7%.

I think we can count ourselves lucky, as I'm pretty sure that well over 7% of the books released in the 90's had something funky either on the cover or stapled to the inside.

We get off relatively pain free this time around, as this issue just has some "collectable" trading cards attached to the inside. As extras go, these are interesting enough. They give a little more insight into this new character Chase, as well as how the D.E.O., her employer, sees some other prominent superheroes.

Chasing Clay The story opens up in a science lab with Clayface V strapped to a table. The artwork here is by Kelley Jones, so of course the lab we are in looks likes Frankenstein's Castle. Cassius, or Clayface V, is currently in the care of the Department of Extranormal Affairs who are looking to find out what makes him tick.

So there have been five different Clayfaces, eh? Who knew. I'm a casual Batman reader, mostly following different creators on the title, so I guess I just never payed that much attention to the different characters underneath the clay.

Luckily for me, we get the straight dope on the different Clayfaces from one of the D.E.O. scientists, Dr. Peter Malley. 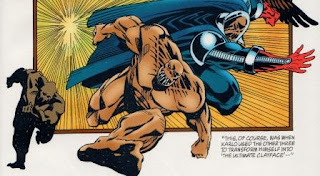 The first Clayface was Basil Karlo, a powerless movie actor turned criminal using his theatrical makeup kit for nefarious purposes. Then there was Matt Hagen, who was exposed to a mysterious substance while diving for treasure on a sunken Spanish Galleon. The third Clayface was Preston Payne, an Acromegaliac who injected himself with some of Matt Hagen's blood. Sondra Fuller was Clayface IV, an extranormal being able to change her shape at will. Cassius was next in the line of succession, and he is the child of Clayface III and Clayface IV.

So with all of that history to deal with, who would've thought that we needed a Clayface VI? But get a new one we do, as the tissue sample that Dr. Malley harvested earlier escapes and bonds with his flesh. At least they stopped with the numbering and just went with calling this one Clay-Thing.

My curiosity got the better of me and I checked over on wikipedia, and there has since been another new Clayface...Clayface VII! I can't fault DC for continually trying with this character, as he is one of Batman's classic rogues. You would think, however, that after 6 failed previous versions you would have a hard time finding a criminal mastermind who thinks it's a good idea to be the seventh. although I probably just answered my own question, and I would imagine that we'll be seeing Clayface VIII before too much longer.

Back to the story, and Clay-Thing has escaped from the D.E.O. lab and is on his way to Arkham Asylum to reunite with Clayface III. 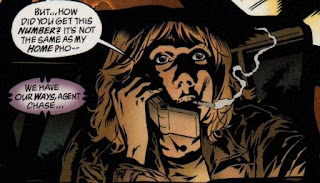 I can tell right now that J.H. Williams III and his odd panel shapes are going to tax my feeble photoshop abilities. Damn you J.H.!!

It doesn't take long for the D.E.O. to figure out what happened and where Clay-Thing is headed. As it happens, the closest agent they have in the field is Cameron Chase. She's not stationed in Gotham, but is there visiting her sister before starting full-time in New York. At this point in the story, the art is split between J.H. Williams III and Kelley Jones. J.H. handles most of the Chase pages, while Jones takes the Batman and Clayface pages.

Batman and Sgt. Bullock both arrive on the crime scene at the same time. But with Bullock being Bullock, he's more interested in some more donuts than in the fact that Batman is there also, collecting samples of the leftover goo for himself. 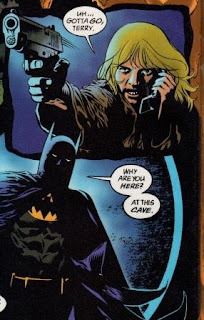 Back in the Batcave, Batman manages to put the pieces together and figures that Clay-Thing is here, drawn to the previous Clayfaces. He soon catches up with Chase, who is staking out the cave where Cassius had previously lived.

Normally, when two heroes meet for the first time, superhero convention claims they must fight! Since Chase doesn't have any powers (spoiler alert: she really does, but doesn't know it), they engage in verbal fisticuffs. Like all superhero battles, they soon realize they are working towards the same goal and are off to Arkham Asylum in hopes of catching up with Clay-Thing there.

Their hunch is correct, as Clay-Thing is being drawn to Clayface III. Batman catches up with Clay-Thing just as he manages to break into the asylum. He's soon distracted by Amygdala, who takes advantage of Clay-Thing's hole in the wall and starts a fight with Batman.

That leaves Chase to stop Clay-Thing by herself. She gives it the old college try, but just barely manages to escape being turned into goo herself before she realizes how his power actually works.

She doesn't get very far before Clay-Thing gets the drop on her again. Aware that she is moments away from turning to pile of mud, her subconscious kicks in and turns Clay-Thing's powers against himself. 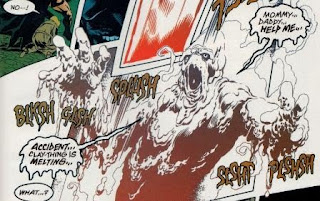 With the threat over, the D.E.O. steps up to take possession of Clay-Thing. In an interesting twist, both Batman and Chase come to the conclusion that Clay-Thing was brought low by an unknown power possessed by each other. Chase thinks there's more to Batman and that he possesses some sort of extranormal power that caused the Clay-Thing to melt himself.

Batman, on the other hand, figures there's more to Cameron Chase. Perhaps more than he, or possibly even she, is aware of. They don't call him the world's greatest detective for nothing, as his hunch is dead on. A fact that we'll learn more about in her own short-lived series.

Two things struck me about this issue, rereading it 11+ years later.

First, Cameron Chase was a character that probably debuted a couple of years too early. I can easily see her having an easier time trying to carry a series in a post Bendis world. Her wit and attitude offer a more "realistic" look at superheroes, which was definitely more in vogue after the turn of the century (is it too early to be using the phrase "turn of the century" in reference to the 21st century).

This was also my first exposure to J.H. Williams III and you can definitely see his style in it's infancy here. It's definitely less experimental than the stuff he's doing in Detective Comics currently, but he's already playing with different layouts and storytelling techniques.

The second thing that struck me about this issue was how much I disliked Kelley Jones' pencils. Maybe disliked is too strong a term, but they were definitely distracting. That surprised me as I generally enjoy his work. His work on Sandman remains one of my favorite storyarcs of all time.

In this book, however, his style just didn't work for me. When he had the chance to draw Batman in the shadows, or Clay-Thing melting and molding away, his work shines. Unfortunately, there was some storytelling that needed to be done out of the shadows and his work suffered for it. Especially when compared to J.H. Williams stuff, his pencils looked especially stiff.

As an introduction to Cameron Chase, this issue was so-so. It set the stage with a little of her history and a peek at her latent super powers. That was good, but the whole scene with the verbal tete-a-tete with Batman was a little awkward and obvious, as Doug Moench really hits us over the head with Chase's dislike of super heroes.

All in all, I enjoyed myself following the exploits of Cameron Chase again. If you don't see regular posts over the next week, you can blame it on her as I'm probably rereading her series again.

Related links for your surfing pleasure...
Posted by TomO. at 12:06 PM