So it was a rather lackluster week of comics last week, as far as new comics go. Jeff Lemire's Vertigo debut with Sweet Tooth was really the only title that made going to the shop on Wednesday worthwhile.

Thank god I still had unread issues from the week before to tide me over, with Superman's Pal Jimmy Olsen Special #2 probably my favorite thing I've read in the last couple of weeks. Bernard Chang tweaked his style a little and it really payed off, especially during the sequence where Jimmy saves someone from a burning house. At this point, I would be happy if Mon-El took off and let Jimmy be the star of Superman during Superman's absence.

So this is all a roundabout way of saying that it's on weeks like this that I'm glad that I have a blog that encourages (nay demands) that I go through my longboxes on a quest to reread my collection.

There's also the bonus silver lining in that I've got a couple of reviews backed up, so we should be seeing new posts every day this week. Enough boasting, let's get to the next pick... 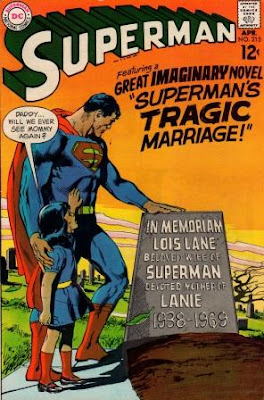 That's right, Superman's back! This issue has two stories, a new one from 1969 and a reprint from the 50's. When this review is said and done, that should give us a Superman story from every decade but the 90's and the 00's. Consider yourself forewarned, as it's just a matter of time before we get a mullet Superman or an electric blue Superman issue up for review!

But we're here talking about the issue we have to review today, and it's one of DC's Imaginary Stories that they used to tell in the 60's. These stories always crack me up, as they force you to accept that all of the other stories are the "real" ones.

What makes them even more interesting, is that they often dealt with more real life issues and played them out to their logical conclusion. That's what we get with this issue, as Superman and his daughter mourn the loss of Lois Lane, wife and mother. Don't get me wrong, it's still comics so be prepared for some super-shenanigans...I'm just saying that taken in their context, there is a difference.

See you in a day or two for my review when we put the difference to the test!
Posted by TomO. at 7:29 AM

Email ThisBlogThis!Share to TwitterShare to FacebookShare to Pinterest
Labels: Superman