I started reading Doctor Strange regularly with his third series, Dr. Strange, Sorcerer Supreme, in the late 80's. Mild curiosity brought me in, and the fabulous work of Jackson Guice hooked me. His work made such an impression on me at the time, that I'm still looking for a Doctor Strange book that lives up to my memories of that period.

I've since completed my collection of Doctor Strange books from his second series up to the wonderful Brian K. Vaughn and Marco Martin mini-series. With the possible exception of the latter, I've never found another period in his history that has captured my attention in the same way.

I am still reading however, and the first 40 or so issues of his second series are a run that I haven't had a chance to sit down and read in any sort of regular fashion since I have completed that run. I guess I can take solace in the fact that there's still hope.

This particular issue is the last of Jim Starlin's three issues. I'm generally a fan of his cosmic stuff, so I'm curious to see how he handles the doctor.

The Return Of The Ancient One! The story opens up in the Sanctum Sanctorum of Dr. Strange, as he is in deep meditation. Behind him, bound hand and foot in mystic energy, is his antagonist from last issue...Dr. Stranger Yet! 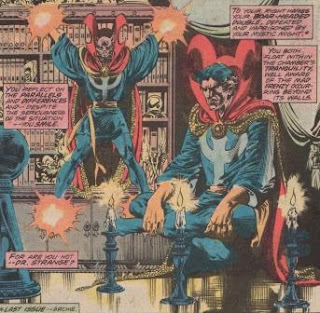 I have to say, right off the bat that I love that name. It's a nifty play on Dr. Strange's name, while successfully treading the line between goofy and interesting. I can only imagine if this villain had been around in the early 90's and enjoyed any semblance of popularity. I'm sure there would have been spin-off series for Dr. Strangest By Far...or Dr. Most Strangest...or Dr. Strangestest! 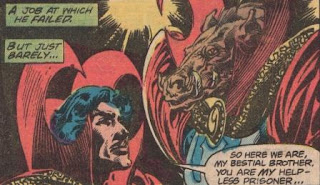 His visuals seem like a beta tested version of Beta Ray Bill, with a little bit of Larfleeze thrown in for good measure. I have no idea what his motivations are or how effective a protagonist he was, but already I'm intrigued.

Thankfully for us, this is a pre-90's book so everything is spelled out in a succinct couple of pages that brings us up to speed. I'll try to do it all in one sentence for brevity's sake...Dr. Strange was trying to stop the Creators from altering the universe when he inadvertently helped them succeed, causing many changes on the Earth in the form of bestial mutations affecting the population of which Dr. Stranger Yet was born. Wow, that actually makes a lot more sense than I thought it would going in.

Dr. Strange decides to use the Eye of Agamatto to delve into the creature's mind to attempt to find out what to do next to save his world. He comes away with two pieces of information. Firstly, that the Creators are not the main villain behind this scheme to remake the Earth, and secondly...the Ancient One has returned to the mortal plane. 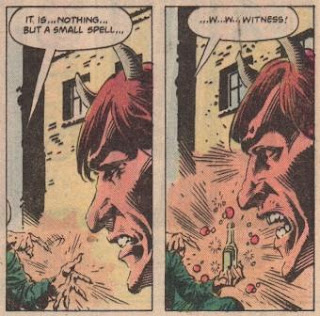 We now pick up with the Ancient One, who has decided to put his great power to a more conventional use...conjuring up hooch! Something tells me that if magic was real, this would be a booming cottage industry.

Dr. Strange manages to track down the Ancient One in the alley in which he has passed out. Awakening him from his slumber, he listens as the Ancient One tells how he came to be found in this state. 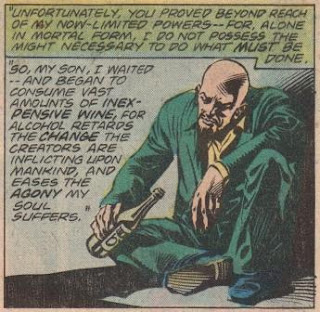 Since he was one with the universe, he was adversely affected when the Creators messed with creation. Taking refuge in a mortal shell, he arrived on Earth to seek out Stephen's help. Unable to find him, he takes to the bottle as "alcohol retards the change the creators are inflicting upon mankind, and eases the agony my soul suffers."

Thank god that Dr. Strange is not the Ancient One's sponsor, for he buys that excuse hook, line and sinker.

Their reunion is short lived, however, as they are beset upon by the High Priests of the New Order bestowed upon the Earth by the Creators. It's up to Dr. Strange to take them out, as the Ancient One is still nursing a hangover.

We get all of the old standards from Dr. Strange's spellbook, including the Shield of Seraphim and the Crimson Bands of Cyttorak. He manages to put three of the High Priests down for the count before the fourth gets the jump on him.

Luckily for him, the Ancient One's metabolism was working overtime and he has overcome the effects of the alcohol just in time to help out his student. He vanquishes the Astral Eye that was giving Dr. Strange a hard time, collapsing once again from the strain on his mortal body.

In a last act of heroism, he is able to transport himself and Dr. Strange to the being that holds the real power behind the recent machinations of the Creators. Through dimensions unseen and unnamed they travel, finally arriving at the feet of the In-Betweener! 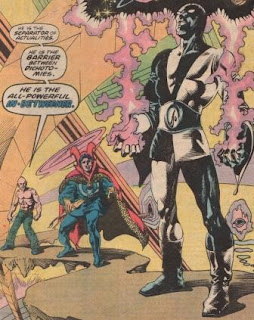 It must have been tough being a Dr. Strange fan in the 70's. This story is relatively short by today's standards, clocking in at a scant 17 pages. Alot of books from this era were of a similar length, but Doctor Strange was bi-monthly! So you had to wait 60 days to get your next fix, which works out to about half a page per day.

I enjoyed this issue, but it did move a tad slowly for a book that came out at a snail's pace. I enjoyed what Jim Starlin was doing, but would have appreciated a bit less expository narration and a little more spellcasting. Apparently I'm not alone either, as the letters page in this issue is filled with raves for the current creative team.

Alas, they're done with this issue. Considering the cliffhanger, ending with the introduction of a character created by Jim Starlin himself, it seems an odd time for him to depart. I wonder what the backstory was on this creative shuffle?

Looking over the creator credits, that seems to be a major problem for this series. In the first 30-some issues, there are at least 7 different writers and 10 pencillers. That makes me thankful for the Roy Thomas/Dann Thomas/Jackson Guice issues that I grew up on, as they managed to do about 20 issues with only one fill-in.

I'm going to keep up my quest for the next great Doctor Strange book, but in the meantime I'll still have my longboxes. Luckily for me, the next holes in my collection to fill are the Roy Thomas stuff from the late 60's and the even earlier Steve Ditko issues. Hope springs eternal.

Related links for your surfing pleasure...
Posted by TomO. at 12:03 AM