The Fury of Firestorm #45

TITLE: The Fury Of Firestorm #45

The only thing I really remember about this book originally, is that it was one of the first DC books that I tried following regularly. It didn't last long, but I do recall giving it a chance.

When I first started collecting, Secret Wars was just finishing and Crisis On Infinite Earths was just starting up. Between the two, Secret Wars hit the sweet spot and is probably one of the reasons that I was a hardcore Marvel zombie for the first five years or so of my comic book reading. That's not to say that I didn't enjoy Crisis On Infinite Earths, as it was (and still is) a title that I enjoy rereading on a regular basis. I couldn't tell you the last time I read Secret Wars.

I bought a lot of the Crisis tie-ins too, Firestorm included, and kept reading it for a couple of months afterward. I remember looking for a DC book to read, and thought that Firestorm could be it. Alas, it wasn't to be, as I only have one more issue after this one in my collection, and it wouldn't be until the Death of Superman before I was a regular DC reader again.

So let's relive those glory days, and see just what it was about this title that didn't hook me.

A gathering of hate! The issues opens up with a unkempt patron being thrown out of a bar. The owner of the bar has had it with his wild, drunken tales of being a mob enforcer who used to go by the name Slipknot. Just as the owner is about to go back inside his bar, he's interrupted by a pair of voices.

The voices belong to Multiplex, and he/they have come to recruit Slipknot to their cause. They soon turn the tables on the bar owner and he ends up being thrown into a nearby dumpster.

So what exactly does Multiplex want with Slipknot? Well, they have a common enemy in Firestorm, so I'm sure it spells trouble for him.

Back at Vandemeer University, Ronnie Raymond is in the middle of football practice when he is visited by his father and his fiancee, and Ronnie's friend Doreen. While he practices, the two ladies have a talk and we find out that Doreen really has a thing for Ronnie, but she suspects that Ronnie is hiding something.

Elsewhere on campus, we catch up with the other half of Firestorm, Professor Martin Stein. In between classes, he is approached by the dean of the university, Emily Rice. She asks him to be her escort to a symphony/fund raiser, and he willingly agrees. It's not until he gets back to his office and is talking to a fellow faculty member that he learns that she's quite the barracuda, and could be more woman than the reserved professor could handle.

I think we've discovered the kryptonite for Firestorm...women and relationships! Both halves of the merged superhero identity have issues.

Ronnie and Martin take note, as here Slipknot demonstrates his way of dealing with lady troubles.
They soon have their next recruit, the Hyena, who they find shackled to a wall in her padded room.

After football practice, Ronnie is having dinner with his dad, Felicity, and Doreen. There he listens to Felicity tell of how she is a lead plaintiff in a lawsuit against Firestorm, as he has destroyed her business in the process of superheroing about town.

Read my in-depth analysis of this exchange here, if you missed it yesterday.

Their dinner is soon cut short, as Doreen receives a note that her sister has broke out of the hospital that she was in. Yep, that's right, her sister is the Hyena! You gotta love these small social circles that superheroes run in, as it always seems like there is less than three degrees of seperation in any relationship before you run into another superhero. I wonder how many the DC version of Kevin Bacon knows? 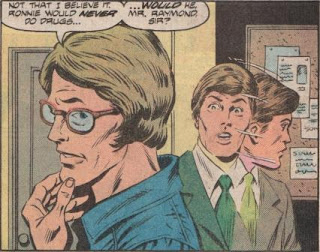 While Doreen calls her folks, we find out that Ronnie has taken off. Everyone seems to think it strange that he would leave at a time when his girlfriend needs him the most. Another school mate who is there comforting Doreen begins to speculate that maybe Ronnie's weird behavior is because he's doing drugs.

We all know it's not drugs that has Ronnie so distracted these days, it's sharing his body with another man that has him all discombobulated. We'll let Freud analyze that sentence, while we get back to the story.

The real reason that Ronnie has disappeared is to change into Firestorm of course, so he can track down the Hyena before she hurts herself or anyone else. The change to Firestorm pulls Professor Stein from his date with the overly friendly dean, to which he is eternally grateful. 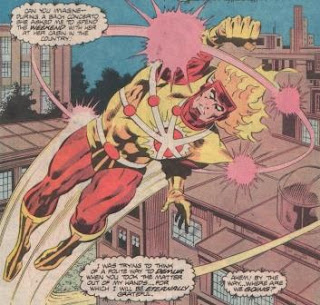 That's actually a nice shot of Firestorm by George Tuska, and it needs to be as this is really the only time in this whole issue where we see Firestorm.
While we leave Firestorm behind this issue, we have time to see Multiplex recruit one more villain for his cause. This time it's Mindboggler, who has just used her mental powers to take down an overly amorous suitor she ran into at the bar.

A book that begins and ends in a bar...I feel like I'm reading an issue of Hitman. 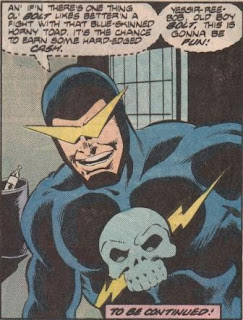 As they wander off, leaving the man lying unconscious in the street, we notice that they were being watched by another villain. The Bolt has been eavesdropping on their conversation and has decided to leave Blue Devil alone for a bit to see what these two are up to, as he smells the opportunity to make a little dough.

The biggest problem, however, was that his book was kind of boring. Let's just keep that between you and me, as I don't need to unleash the fury of Firestorm on me.

This issue wasn't bad, far from it, as Gerry Conway wrote a technically entertaining issue with some clever dialogue and characterizations. It moved the story along and did everything it needed to to set up the story. The only strike against it was that there was no action. Granted, it's the first part of a three-part story, but if I had my druthers I would have liked to have seen just a little excitement with Firestorm.

All of the non-talky scenes were with Multiplex gathering his compatriots, and while fun, it did seem a little anti-climactic as none of them are even close to b-level villains. My apologies to the Multiplex fans out there, wherever you are. The only one of them I was familiar with was Bolt, and he doesn't show up until the last two panels.

The art of this issue is by George Tuska. He has just recently passed away, so it was a nice treat to see some of his work again. It has a great old-school style to it that I really like, but it does make an 80's comic seem a little more dated than usual. Alas, he was only on for this issue to fill in between an art roster change.

I can see why I sampled this book as an early entry into DC comics, as it definitely has a Marvel style hero with his collection of Marvel style problems. At the end of the day, however, I guess Marvel was just doing that better in the 80's than DC was and my flirtation with DC was shortlived.

Don't feel too bad for them however, as that would change in a big way over the course of the 90's.

Related links for your surfing pleasure...
Posted by TomO. at 9:54 PM