Odds and sods...and X-Factor too!

It's Wednesday, and that usually means another episode of Comic Book Days of Wednesdays Past, but I'm kind of short on time this afternoon. So instead, we'll do a quick Odds and sods with things that have been percolating inside my brain over the last couple of weeks.


Now on to the business at hand, which is picking another random book to review. Take it away, Randomizer! 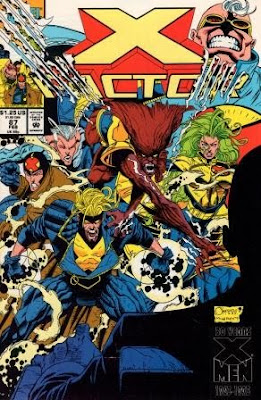 I don't know if this issue has been canonized as a modern classic by the comics audience in general, but I definitely think it's one of the best books of the last twenty years. At the very least, it's the magnum opus of Peter David's run on this title.

For you youngsters who weren't around 16 years ago, or for those readers who avoided the X-Titles in the early 90's (I'm sure there was probably one or two of you out there), this was the issue were X-Factor goes up against their most nefarious foe yet...a psychiatrist!

The whole issues takes place in the doctor's office, and is one of the most engrossing books I remember reading. That story structure may seem old hat and overused in today's market, but in a pre-Bendis world this issue truly stood out as something special.

This was also the issue that started Joe Quesada's brief run on this title. He had been doing covers for some months beforehand, but this book was all him and it was a real tour de force.

To say I'm looking forward to this issue is an understatement. I actually have a small amount of trepidation about proceeding, as this is the first issue the Randomizer has picked that I have fond, fond memories of. Hopefully I can write an entertaining enough review without being too sycophantic. See you in a day or two for the review, and we'll see if I managed to succeed.
Posted by TomO. at 12:36 PM

Email ThisBlogThis!Share to TwitterShare to FacebookShare to Pinterest
Labels: X-Factor