Fun with statistics! Not so fun with Deathmate Red!

So last week I had a reader ask me some questions about the entirety of my collection. I had previously thought about doing a post that took a deeper look at what's in my collection, since it's essentially this blog's lifeblood, but I wasn't sure who would really care.

Apparently, at least one person would. So without further ado, let's dive into some number crunching. And never let it be said that I didn't try to please my audience, one reader at a time.

How does the collection break down by publisher?

So how does that match up to what's been reviewed so far? Of the 45 books we've read, 51% have been Marvel and 38% have been DC. It looks like the Randomizer has a slight Marvel bias.

Nick's next question was how many issues do I have with my favorite character(s). As regular readers know, I'm a bit of a Superman and Avengers fan. I've also been known to dabble in the X-Universe from time to time as well. Let's take a look at how these three fare.

I'm actually a little surprised that Superman was able to beat out the Marvel Mutants. I always figured that with the pure volume of titles out there, that the X-Men would've had more issue in my collection. But then I guess Superman hasn't exactly been a slouch in the amount of titles he's carried over the years either.

Now let's take a look to see how the collection breaks down over the decades.


So why couldn't I have started reading comics in the 60's, instead of the 90's? My son's college education would be so paid for, if that was the case. Although weren't we all supposed to be financing our kids' education with polybagged copies of Superman #75?

That takes care of Nick's questions. Thanks again to Thelonius Nick for the inspiration for this post.

Before we pick the next random book to review, there was one last statistic that I came across in looking over my database that I found interesting.

The creators name who popped up the most?

Curt Swan lead the pack with 447 books. That guy was a monster pencilling the exploits of Superman for three decades.

Geoff Johns came in second with 407, just beating out Chris Claremont at 402.

So there you have it. I hope I didn't bore everyone to tears with a somewhat indulgent post about my collection. Now, on to the business at hand to find out what the next random book to review is. 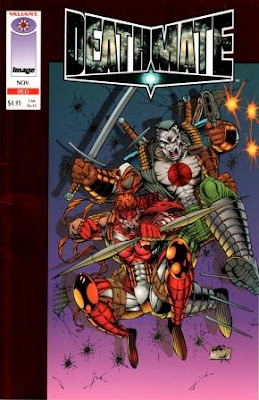 ...and that book is Deathmate Red from November 1993, published by Image and Valiant Comics! Although with the quality level of my scanner and monitor it looks an awful lot like Deathmate Black, so hopefully I didn't make their already confusing numbering system for this mini-series even more confusing. Damn you 90's foil covers!

Or should I have cursed "foiled again by foil covers!"

My brain hurts too much from crunching numbers to have to think about reading and reviewing a 60 page book drawn and written by Rob Liefeld. I only have myself to blame however, as this book is from my collection.

I think I need to make sure I got lots of sleep tonight before I tackle this one, so we'll see you in a day or two for the review.

Until then, may all your legs be wrapped in little pouches and all of your expressions unnecessarily grimaced!

Email ThisBlogThis!Share to TwitterShare to FacebookShare to Pinterest
Labels: Deathmate