UPDATED: Back when the lunatics were running the asylum...now with more spring air, lever cocking action!

I know that I mentioned yesterday how I was looking forward to reading The Defenders #51 for some good, old-fashioned Hulk action. Well don't hold your breath, as Hulk was barely in the issue, although he does have one rather riveting scene with an ice cream cone vendor. You Nighthawk fans, however, will be quite pleased.

One thing I did notice in this book was how different in tone it felt from today's comics...and I mean really different. I know it was the swingin' seventies, but come on. 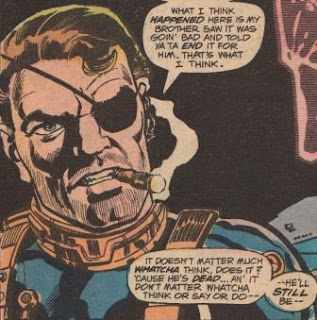 We'll start out with the tame one first.

Comic book characters have been smoking cigarettes and cigars for decades, so this one really isn't that big of a deal. Maybe more so for some readers who have only started reading comics since the turn of the century, but back in the old days there were a certain group of characters who would've seemed out of place without a stogie...Nick Fury first among them.

Still, it's not something that you see much of anymore so it definitely stands out. Check out this post over at Silver Age Comics for an even older example that is too funny to believe.

And since this book is drawn by Keith Giffen, we're even treated to panels drawn from Fury's second hand smoke!

That wasn't that bad, but they only get worse from here.

You know what would go really good with that stogie?

Why an ice cold Schlitz Beer! And here's Moon Knight to tell you all about it.

This panel kinda makes the whole brouhaha about Superman holding a bottle of beer on a recent cover of Action Comics seem kinda silly.

Unless all of the underage drinking that has been ravaging our vulnerable American teenage population can be blamed on this one Moon Knight panel. Then I guess I can kinda see DC's concern.

And since this book is drawn by Keith Giffen, we're even treated to a panel drawn in the shape of a beer can! 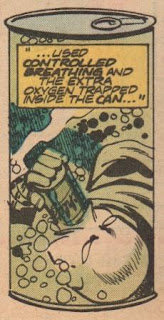 So now that Marvel has subconsciously suggested that we should all be smoking and drinking our way through life, what are they going to try to sell us in their advertisements? 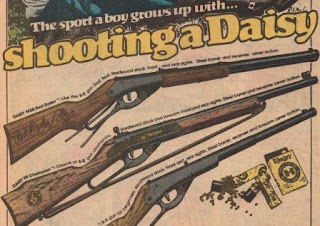 Guns and ammunition, of course! It seems perfectly safe and reasonable to me.

Finally, after a hard day of reading comics, smoking stogies, drinking beer, and shooting squirrels, rabbits, and the occasional neighbor kid...how's a boy supposed to wind down and relax? 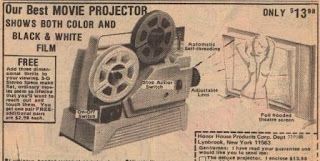 With your very own movie projector. That's right, now you too can kick back in the privacy of your own home and watch home movies.

Although somehow I don't recall my home movies being as sexy as the ones in this advertisement. Wait a minute...they're not subtly suggesting that we watch something else on this, are they?

Nah, these books are for kids. They wouldn't do that.

UPDATE: So while I was helping the wife sell her photos on the campus of Michigan State University over the weekend, a new and previously unkown bit of her history came into the light.

She used to belong to the local chapter of the Daisy Air Rifle Gun Club when she was a girl!

I truly don't know what is more amazing...the fact that she can shoot an apple off of my head at fifty paces, or that there are still untold stories about her past that I'm discovering after 15 years of being together.

Come to think of it, I don't think I've ever seen any of her old home movies either.
Posted by TomO. at 11:27 AM