So I think I'm thoroughly rested and recharged, and ready to take on the second half of Deathmate Red, where the lunatics of Extreme Studios run rampant across not just one, but two comic book universes!

If you missed the first part, check over here.

When last we left our heroes, they had just defeated the world's most pacifist terrorist organization with extreme prejudice. Let see what happens next...

Although we should probably call him the Thinker instead, as he doesn't do a good job of actually watching as he misses the guy sneaking up behind him with a huge gun. So while his watching skills left a little to be desired, his thinking actually clues us in to the fact that Prophet is one of the only characters that realizes that two universes are merged and things are not as they should be. I guess that explains why Shaft was so hardcore and ruthless just two pages ago.

After waking up from being knocked unconscious, Prophet finds himself a captive of Knightstrike! They are the rebel faction of heroes on this merged world that have sworn to take down the evil Harada Corporation once and for all. They are composed of Chapel and Al Simmons (two former Youngblood members), along with Kirby and the Eternal Warrior. 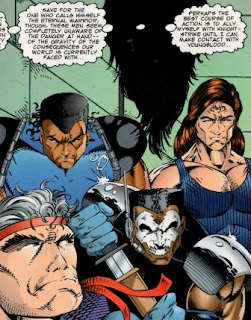 Knightstrike has assumed that Prophet is one of Harada's latest genetically enhanced superheroes. During their interrogation, we find out that the terrorists from the first half of the book were actually the good guys as Harada really is an evil corporation bent on world domination, with Youngblood as his personal enforcers!

Prophet explains that he can usually tell the future, but somethng is messing with his powers as things are clouded here. The Eternal Warrior backs up his suspicions with vague feelings of uneasiness of his own. Prophet decides the best thing to do is play along with Knighstrike until he can make contact with Youngblood. I guess he must've missed that part of the interrogation where we find out that Youngblood is evil.

It also turns out the Prophet's arrival in New Harada is perfect, as there is a huge military parade tomorrow and that is when Knightstrike is planning their coup to take him down once and for all. 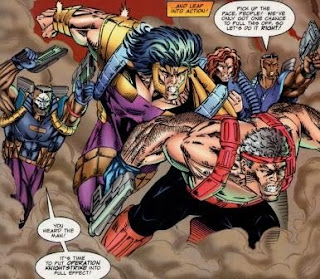 Strike they do, and if I may say, in a rather violent and ruthless fashion that easily makes this one of the most entertaining parts of this book. I found myself chuckling just a little bit more with each fatality that got piled onto the bodycount.

The first one to boared the carnage train is Al Simmons, who gets his torso obliterated by Dutch. Let's also give some extra bonus points to Dutch, as he's the first one to realize that these guns that everyone carries actually do work if you pull the trigger.

Diehard gets blown up, along with Kirby when he detonates a bomb kamikaze style.

Seeing as how Dutch was on a roll, he puts a bullet through Chapel's brain just as he is about to take out Bloodshot. While we're in a generous mood, let's give some bonus points to Bloodshot too, as he actually gets to speak two whole sentences in this half of the book!

So while all of that was going on, Shaft was left conveniently unopposed long enough so that Prophet could try to talk some sense into him and let him know that this is not how it's supposed to be. 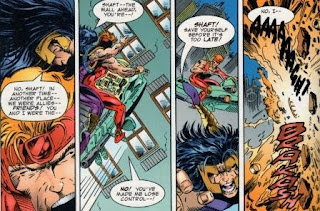 Just as he's about to make him realize that something is wrong, Shaft loses control of the sky-bike they're riding on and crashes into the side of the building. Prophet manages to save himself just in time, only to land on the ground to bear witness to the slaughter at his feet.

Finding no survivors of the horrific battle, Prophet steels himself to the task that is left to him, and him alone. He must return the world to it's rightful state.

Somewhere in these 54 pages is the basis for an entertaining story. I caught glimpses of it here and there, and there were a couple of parts of this book that I really enjoyed. But it's kinda like having a Thanksgiving meal and only enjoying the corn. The turkey should be delicious, and it sure smells good, but in the end it was dry and tough.

And I shudder to think about the implications of what I'm about to say, but I think I may have enjoyed the Liefeld art in the first half. Hold off on the pitchforks for a second and let me explain myself. It was only after reading the second half of this book that I learned to appreciate the first half.

The art in the latter part of this book was just not all that good. First of all, with seven different pencillers it sort of made the story lurch along. Even considering the pencillers were all doing their best Liefeld style, the quality level was all over the place. Say what you will about Liefeld's art, but at the end of the day his work looked so much more polished than the other artists contributing to this issue. I can definitely see in hindsight, how he rose to the top of the artistic echalons at the time.

So there you have it...the nineties at it's worst (or best, or both...depending on how you look at it).

I survived reading Deathmate Red, and all I got was this lousy t-shirt blog post.

Related links for your surfing pleasure...
Posted by TomO. at 9:09 PM