That's what I remember! It was the mad ideas thrown off of each page quicker than my mere brain could even comprehend them.

Freeze Me With Your Kiss Part III of III
The book opens up with a group of people in what looks like white haz-mat suits using a hand held torch to cut a hole in the side of a port-o-potty. Out pops the head of our hero...Spider Jerusalem. 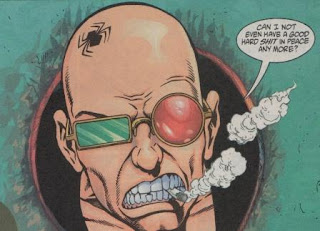 It's scenes like this that are the reason why I love this book. It shouldn't work, and in lesser hands it would evolve into nothing more than potty humor. Here, however, messengers Ellis and Robertson elevate it into something more.

Before we find out exactly what they wanted to see Spider for, we cut to a dungeon where an interrogation is in process. Mitchell Royce, Spider's editor at the paper, is questioning a young lady strapped in a chair.

It seems she was one of Spider's "filthy assistants" before they were called filthy assistants. She was with him on assignment as he was investigating an adult entertainment establishment, who Spider thought were manipulating their clientele's libidoes.

Whether this was wrapping up a sub-plot, or introducing one, I can't quite remember. Ideas get tossed around willy-nilly in this book with such speed, it's hard to keep track sometimes.

Back in the port-o-potty Spider is demanding to know why his shit has been interrupted. The people in the haz-mat suits are members of a cult that believes in "zero tactility" and "total solitude". More importantly, however, they state that they have the frozen head of Spider's ex-wife.

After careful consideration of the facts, Spider promptly tells them to get lost and to take his ex-wife with them.

Puzzled by his intransigence, they press on and use their torch to cut open the whole front of the toilet. They wrestle Spider out of the port-o-potty and explain the current situation further. In their culture, touch is not permitted. It seems that Spider has recently broke their taboo in an act of force, and has been found guilty!

Spider is led to the waterfront docks, where he is to be executed for his offenses. Facing a life and death situation, he uses the only weapon he has...his wits. 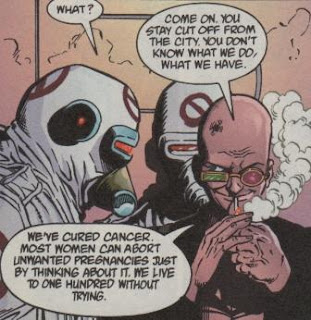 He plays on their isolation to convince them that he can kill them by just staring at them. In fact, they better start to explain themselves, if only to delay their imminent horrific execution.

His bluff works, and they begin to relate the story of how his ex-wife's frozen head ended up in their possession.

In a binge of drunkenness, Spider's ex-wife crashed her car into their compound. Knowing exactly what she was doing, she ripped off one of the adherents hoods and proceeded to stick her tongue in his mouth. She shouted out her name several times so that they would know exactly who to blame for this offense and left. 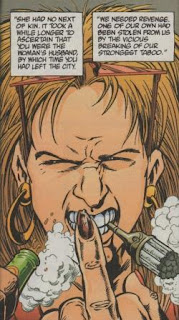 She bought off the police who came to investigate, and that night had her head frozen to be reanimated in the future.

Still needing to exact revenge for the innocence that was taken from them, they tracked down her next of kin...Spider Jerusalem. He would pay the price for her breaking their strongest taboo.

It seems it was all an elaborate plot by Spider's ex-wife to have him killed. She knew the cult members would exact revenge on Spider after she was cryogenically frozen. She would then be able to be brought back to life in a world without her husband.

While they contemplate this new bit of information, another ongoing storyline catches up to the current one. All throughout the previous issues, Spider has been hunted by a dog that he castrated earlier on. This dog is not the sharpest tool in the shed however, and in this issue alone gets hit by a taxi... 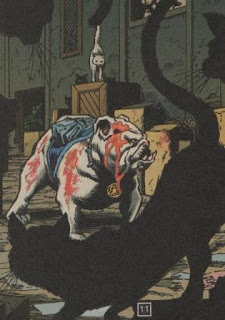 ...and finally burned by holy water after a run-in with some religious freaks... 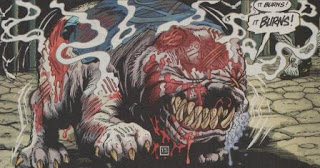 After all of that, he has finally sniffed out his quarry. Blinded by rage, cat scratches, and holy water burns, he misjudges exactly where Spider is standing and jumps to his (presumed) death. 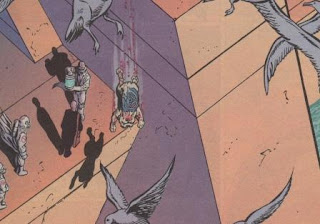 Back to Spider's predicament, he decides to take matters into his own hands...literally. He grabs the frozen head of his ex-wife and tosses it over the docks after the dog, to be swallowed by the polluted ocean. 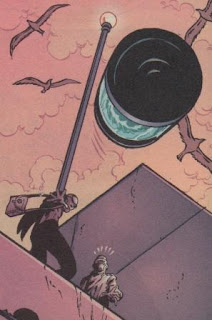 With her now dead, there's no more reason to take revenge on Spider. Honor is served and every one's happy. The cult members thank Spider and leave him in peace.

Spider eventually returns to the office of his editor to file his story. As he barely makes it in the door, however, his is attacked by a decapitated French Secret Service Assassin.

With everything else that Spider has had to deal with today, this is child's play as Spider tosses it through the window. One of the great things about this book, is that you truly had no idea what was going to happen next.

At the end of the day, Spider decides he needs to get a new apartment...one built like Fort fucking Knox.

This book is still just as entertaining today as it was 10 years ago. Hell, it's heavy political themes that it would delve into with the next issue are probably even more relevant now.

Warren Ellis made his name with this book, and it's a helluva book. The character of Spider Jerusalem is a perfect mouthpiece for Ellis. In fact, subscribing to his Bad Signal email list is like reading an old Transmet book on one of Ellis' good weeks.

The strength of this title earned Warren Ellis an automatic look at every other book he has done. I'm sure I would've been clued into Planetary, The Authority, the Apparat Singles, Desolation Jones, Black Summer, Nextwave, and Global Frequency eventually, but it's nice to have been in on the ground floor.

Darick Robertson was just as much a beneficary of this books success. He was on every issue and managed to perfectly capture the mad genius of Ellis' ideas and themes.

This is definitely a series that deserves a nice hardcover treatment. DC are finally getting around to Preacher, so maybe there's hope for Transmetropolitan yet!

All characters and artwork reproduced are (c) Warren Ellis and Darick Robertson
Posted by TomO. at 10:30 PM