The Vision was the first character that I became attached to, where I started collecting his key books from the back issue bins of the local comic book stores in around metro Detroit in the mid-to-late 80's.

His first appearance in Avengers #57 was the first back issue that I ever bought where I laid down some serious cash for it. I still remember hemming and hawing after asking to look at that issue from behind the glass counter top. I mean, that was $7.00 for one book! One book! That was crazy! The last time I checked, that issue is now up to about $150 dollars in it's present condition. Not too shabby for a first time investor.

When John Byrne had come onto this title eight months earlier, he made the Vision a centerpiece of his run by having him dismantled and dehumanized. As if the history and real origin of the Vision wasn't convoluted enough, Byrne now dares to bring back the original Human Torch, casting doubt once again on the true origin of the Vision.

How does it all make sense? Let's dive in and find out...

Return Of The Hero
The story opens up with a hysterical women being questioned by the Avengers. It seems that she has attempted to break into the west coast compound to appeal for their help. Her name is Ann Raymond, and she is the widow of Toro, the sidekick to the original Human Torch.

I'm already tired of typing "original" in front of Human Torch. Johnny Storm appears nowhere in this issue, so any further mention of Human Torch implies that I am referencing the original Human Torch. 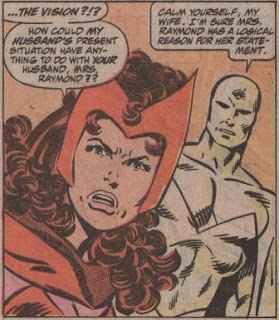 All of this is too much for Wanda to bear, and in some foreshadowing that she's become slightly unstable emotionally, she flies off the handle and accuses Ann of trying to implicate the Vision in the death of her husband. She would soon have good reason for flying off the handle, as Byrne continues his one man quest of messing with the Vision and Scarlet Witch by retconning their kids out of existence.

I was going to recap it in more detail, but honestly it would take me more words than Byrne uses in the book, and believe me...it's a lot of words.

Suffice it to say, Ann thinks her husband may still be alive and Wanda's pissed. Let's move on.

Hank has a hunch that this all somehow leads back to Immortus, and they decide to investigate her story by checking out the grave site of the Human Torch.

While Hank tries to convinced the mayor to let them exhume a body from a funeral that never existed, The Vision and Scarlet Witch take the more direct approach. Using his intangible powers, the Vision confirms that the body of the Human Torch is indeed buried in the graveyard. Wanda uses her hex powers to reignite the Torch, and he comes blazing out his coffin. 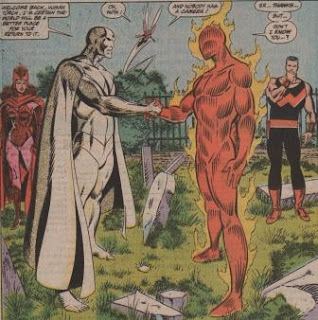 Back on the ground, introductions are made and the Vision meets the hero who, up until now, it was always assumed his body was constructed from. Back at the base, Hank Pym explains his theory about what this means for the true origin of the Vision.

After all that, it turns out that the Vision was built from the same molds and parts that the Torch was, but not his actual android body. 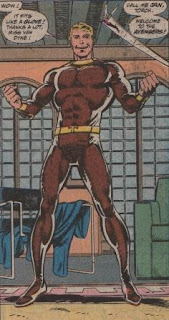 Thinking ahead that everything would work out, Jan presents the Human Torch with a new costume and offers him a spot on the roster. It's all too much for the Torch, who gets a little emotional, proving the fact that twenty years later...Even an android can cry!

The big takeaway from this issue is that it's near impossible to do a story dealing with the origin of the Vision without needlessly complicating things.

Seriously...the big reveal this issue is that the Vision was built from spare parts leftover from the creation of the Human Torch. That's all well and good, but to get to that reveal we had to read through close to half of this issue devoted to either flashbacks or characters talking about what happened previously.

Now I'm a fan of the Vision and continuity, so this stuff is like crack cocaine to me. But I pity the person who picked this book up as their first comic book. Literally, the only action in this book is the Torch flying out of his grave and Wonder Man chasing after him. Even with that, most of the action takes place off panel, to allow more pages for people talking.

The artwork by Byrne is what you expect for a storyteller of his talent. This book looks a lot more Next Men than Uncanny X-Men. I personally prefer his more fluid earlier work, but I still enjoy seeing his work to this day. I was even glad to have him back on Action Comics a few years ago. His style may be a little outdated in today's market, but I still dig it.

I owe a big hearty thank you to the Randomizer for picking yet another Avengers issue. I swear I could read these books from the 70's and 80's all day long. One of these days my hope for a readable Avengers book set in current continuity will come to pass. Dare I hope?