We now come to part four of our review of Action Comics Weekly #614, so if you missed any of the three previous parts click here, here, or here.

As I mentioned previously, when ACW started up, Superman was essentially sidelined to showcase other heroes. He still appeared in every issue, however, in the form of a two-page serial that ran from week to week. It was written by Roger Stern and drawn by Curt Swan, so it does have a great pedigree. Does it hold up? Let's find out...

Death Comes Calling... The story opens up with Superman flying to California. It would seem that there is a cult out there that worships Superman as a god.

I know what you're saying...crazy cults on the west coast...big whoop!

The only problem is that by worshiping Superman, the cultists are gaining bizarre powers. One of those cultists, Bob Galt, appealed to Superman for help. While in Metropolis, another cultist tried to kill Bob before he could warn Superman. He failed, however, and blew himself up before Superman could question him.

That's not the end of the story though, as someone who matches the would be assassins description has been admitted to a hospital in California with multiple burns.

Superman arrives at the hospital to question the assassin, but it stopped by Nurse Ratched. 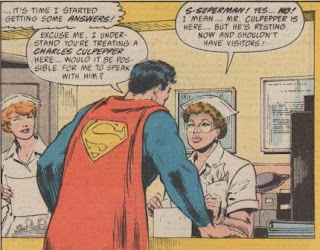 Join us next week as Superman battles the health insurance companies in "Public Option...Public Death"
She soon cracks under Superman's super-charisma and tells him the room number. Using his x-ray vision, he sees that the cultists have sent yet another member to finish the job. They are nothing if not maticulous. 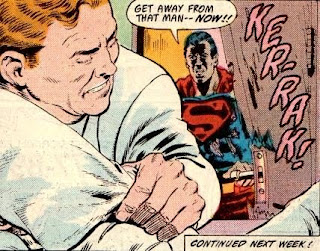 Ignoring Nurse Ratched's strict orders for no visitors, Superman barges into the room to stop the never ending chain of assassins.

Will he stop him in time?

You'll have to pick up the next issue to fine out, but the safe money bet is on the latter!

This Superman serial was the only story that I previously read from this run of Action Comics Weekly. Being the Superman fan that I am, I read those first and dutifully ignored the rest under the stress of keeping up with current continuity comics.

Overall, this serial was a little on the silly side. It would turn out that the cultists base was in a location that was flooded by weird radiation, thus giving them powers. An evil corporation was also involved, trying to capitalize on the radiation. Superman and Clark Kent end up getting to the bottom of things and stopping the corporation only to find the true mastermind behind it all.

And who is that nefarious genius? It was Darkseid!?

That would've been cool and all, but it took 'em thirty-some issues to get to this point, and within the next two issues Darkseid up and leaves, and the serial ends.

Oh well, it was only a two-page weekly serial. I guess when you're dealing with those, the wackier the better. I just wish that we would've seen some more Curt Swan art with snazzier visuals than a bunch of brainwashed people in civilian clothes and evil CEO's in suits.

Related links for your surfing pleasure...
Posted by TomO. at 11:41 AM