We're here live from the floor of the San Diego Comic Con to bring you the next pick for me to review. It's been a busy couple of days, hobnobbing with the comic book elite, jumping from panel to panel...

Eh, who am I kidding...it's just me and the Randomizer standing in front of a green screen. No San Diego for us this year, so let's get the next pick going so I can go back to surfing the net for all of the latest news like everyone else.

So what is the next book up for review? 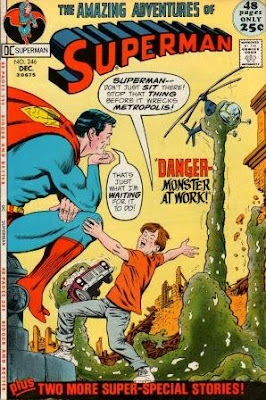 As I've mentioned a couple of times before, I started my collecting as a Marvel zombie in the 80's and early '90's. I also followed pretty much every event, so when the death of Superman rolled around, I was primed to start sampling some more DC comics.

The near weekly installments of the yearlong storyline hooked me in, and I've been reading and collecting Superman titles ever since. As things stand right now, I have every issue of every title with the word "Superman" in it going back to 1969 and I am currently piecing together my 60's collection, which is still relatively spotty.

I haven't won the lotto yet, so my collection of Superman books from the 40's and 50's is even sparser, standing at the grand total of one book. One of these days I'll have the resources to fill those in, but in the meantime it's all about enjoying and collecting the issues that I can afford.

We get a special treat with this issue, as it contains three separate stories. That's 48 pages of Superman goodness, and I'm going to enjoy every page of it. The first story is a regular Superman tale, then we get a story from the Fabulous World of Krypton, and finally a reprint of a golden age Superman story.

See you on Monday, as we'll dive headfirst into the crazy and oftentimes bizarre world of Superman in the 70's.
Posted by TomO. at 10:59 PM

Email ThisBlogThis!Share to TwitterShare to FacebookShare to Pinterest
Labels: Superman