Batman #603...or it's Criminal that this Sleeper of an issue has remained Incognito for so long!

Regular readers of this blog know that it's been a challenging holidays for yours truly, what with fighting water elementals all week long. It's a new year however, with new challenges that await us, so it's time to press on and clear the decks. That means we need to get the review for Batman #603 wrapped up, so it can stop taunting me from the other side of my gray water drenched office.

All of that's a roundabout way of saying that this one's going to be a quick review, with not a whole lot of funny business. Honestly though, we're talking about a book by Ed Brubaker and Sean Phillips, so there's really only so many ways to heap lavish praise on these guys.

Going in, this is part eleven of the eighteen part Bruce Wayne: Fugitive storyline, which directly followed the twelve part Bruce Wayne: Murderer? story. So this is in reality part twenty three of a thirty part storyline! Still with me? Good, because this issue is essentially a stand-alone chapter of this storyline that reads just as well by itself.

The only thing you need to know going in, is that Bruce Wayne was framed for the murder of his girlfriend. In trying to clear his name and solve the crime, Batman comes to the realization that the persona of Bruce Wayne is too heavy a burden to carry while in the pursuit of justice. Needless to say, being Batman full-time is no picnic either. 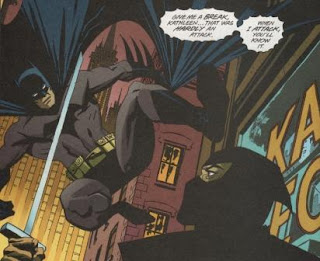 What do you call a collection of ninja anyway?

And isn't this supposed to be a quick review? 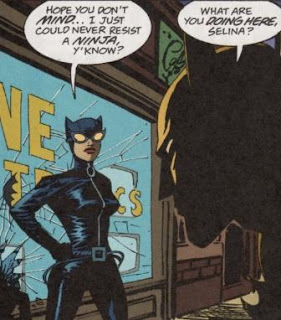 Catwoman soon shows up to deliver a message to Batman. Seeing as how Bruce has gone Batman full time, he's been harder and harder to get in touch with. Dr. Leslie Tompkins therefore turned to Catwoman to track him down to let him know that she needs to see him urgently.

Dr. Tompkins informs him that there is a terminal patient at the hospital that he might be interested in. The patient is Gary Sloan, and he was the detective who was assigned the Thomas and Martha Wayne murder case, as well as helped comfort a young Bruce Wayne after his parents were murdered. 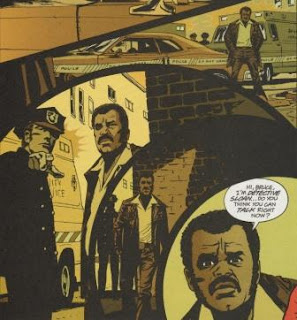 Detective Sloan has called on Batman to ask for his help. It turns out that during the course of his career there was one case he never solved. I'll give you three big guesses which case that was, but you probably only need the one.

As the years have passed, Sloan has seen the city's criminal element change and adapt as Batman has emerged from the shadows. Eventually, there was no place for an old-timer like him within the new paradigm. 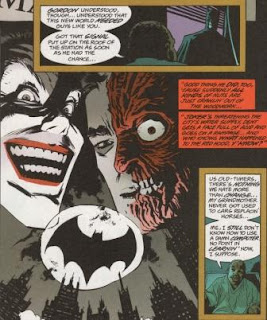 Seeing has how he was one of the honest cops, however, he knows the good that Batman does for the city. That makes Batman one of the few people he can trust and he asks Batman to take over the unsolved murder case of the Waynes.

With Bruce Wayne wanted for murder and a fugitive from justice, Detective Sloan feels his failure all over again. He knows that Bruce Wayne didn't kill his girlfriend. All the years of experience on the job teaches you how to read people. The young Bruce Wayne was changed on that awful night, but it wasn't into a killer. 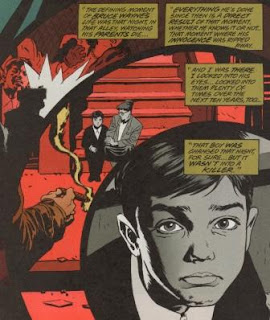 Now it's Bruce's turn to comfort the dying police detective, who still worries after all these years that he let the young boy down. Batman turns to him and lets him know that he was instead an inspiration and pulls his disappearing act out the window. In the grip of his medication and pain, the detective didn't quite hear what the Batman said to him, but we did. The Batman does have a heart after all.

On the way back to the Batcave, the detectives final words about "defining moments" and how "they change a person" keep ringing through his head. He accesses all of the information that he has about his parent's murder, as well as the murder that Bruce Wayne is accused of, on the computers in the cave.

Both of these incidents are defining moments in the life of Bruce Wayne. What those moments mean and how they change a person are paramount to the character of that individual. Detective Sloan knows in his soul that Bruce is innocent. His last request was for Batman to help Bruce Wayne, as he deserves at least that much. 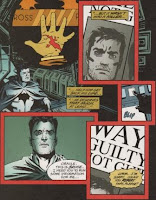 Still staring at the computer screens with all of the memories flooding back to him, a now decowled Batman opens up the lines of communication to Oracle. He has a request for her, not as Batman, but as Bruce Wayne.

This issue right here is a textbook example of how to write a story for a multi-part crossover that reads just as good by itself as well as part of the larger story.

It's a pivotal chapter in the Fugitive storyline, as Batman comes to the realization that he needs the persona of Bruce as much as he needs that of Batman. It's the end of act two and sets the stage for the conclusion. But reading the story seven years later completely removed from the massive meta-story that was being told at the time, and this issue was just as good. At it's most basic level, it's an examination of character and tragedy. What better vehicle do we have to study these concepts than trough Batman.

Over his seventy-plus publishing history, this theme has been explored countless times. The entertaining aspect of this version however, is seeing it done by Brubaker and Phillips. These two have carved out quite a niche for themselves in the crime and noir corner of the comic book world, so to see their take on a super-hero born of that genre is a real treat.

As near as I can tell this is one of their first collaborations, although a year earlier they had worked on a Batman graphic novel called, appropriately enough, Gotham Noir. I've never read it, so this was my first exposure to their work together. I would soon depart reading Batman books on a monthly basis with the conclusion of this storyline, but followed Brubaker and Phillips over to Sleeper and eventually Criminal, where you can currently see their work.

It's definitely worth checking the back-issue bins for this issue if you are a fan of their current work. It's no big surprise to see these two have collaborated quite a bit over the intervening years, as they meshed pretty seamlessly right from the get-go.

Related links for your surfing pleasure...
Posted by TomO. at 10:18 AM