As I said yesterday, this mini-series is a virtual blank slate to me, even though I bought the first issue when it came out. I never bought the rest of the series, so I'm not even sure if I ever read the one that I did buy.

In the interest of giving you something to read before we get into the blow-by-blow of the issue, I looked this series up on comicbookdb.com and found a decent sized list of creators involved that now has me slightly intrigued.

The first issue of this series was pencilled by Pete Woods. Here's a guy who didn't really knock my socks off when he was pencilling the Up, Up and Away storyline in the Superman books for the One Year Later stunt. It wasn't until the end of the eight part storyline did I appreciate his style, and now I find myself looking forward to him sticking around the Superman stable of books for as long as he wants to.

Rick Burchett pencilled the last issue of this series. In contrast to Pete Woods, Rick is a creator I've been following since his work on the Impact line of books from the 90's. He's got a great clean and simple line style that made him a perfect fit for the Batman Adventures books, but I'll take his regular DCU work whenever I can get it.

And then of course, there's Marcos Martin, who pencils this issue. I'm seriously tempted to seek out the rest of this series, so let's find out if it's any good.

Joker: Last Laugh Part Two: Siege Mentality
Oracle sits in her computer bunker, going over footage of the Joker leading a riot at The Slab. She's on the line with Nightwing as they review the last few moments of security camera footage she had before Joker cut the feed. It shows Black Canary getting pummeled by a variety of Joker-ized villains. Oracle beats herself up over the fact that she took her eye off of the Joker, but Nightwing assures her that it's not her fault as he heads to the Slab to try to stop him. 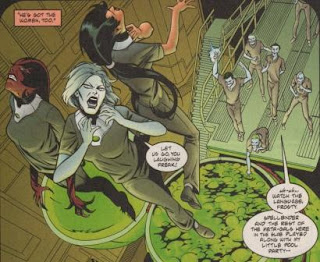 The Joker meanwhile, is stirring the pot, so to speak, as he casts a trio of fellow supervillains into the body of Chemo. It's not entirely clear what he's up to yet, but I imagine we'll find out soon enough. 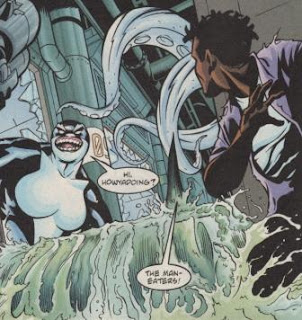 We cut to the head of security for the Slab, Norman Shilo (a.k.a. Mister Miracle III), who is trapped in the lower bowels of the prison with a S.T.A.R. Marshall that we've actually encountered previously here at the Random Longbox. They're on their way to block off an undersea tunnel to prevent any villains escaping when they get ambushed by a group of water-themed villains.

On a different level of the prison, Nightwing finally makes his way inside and it's not too long before he comes across the bodies of the Justice League, defeated and strewn across the floor. A semi-conscious Wonder Woman warns Nightwing to be careful, but it's too late as Bat-Mite (yes, Bat-Mite!) emerges from the shadows and begins to fight with him. 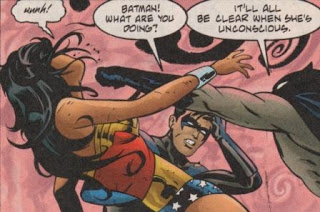 Luckily for Nightwing, Batman is soon on the scene and he recognizes the situation for what it was. Lady Mastermind was messing with Nightwing's head and creating the illusion of the Justice League and Bat-Mite. One quick sucker-punch later and she's out for the count.

Together, they find the near comatose body of Black Canary as they come to the realization that the Joker has already escaped and this has all been one big distraction. For what, they don't know yet.

As the Joker exits the undersea tunnel that Shilo attempted to seal off earlier, he gives the signal to a couple of super-villains still left behind to start the destruction of the prison. Neutron and Black Mass both detonate, which causes a localized black hole that begins to suck the prison in on itself from the inside. 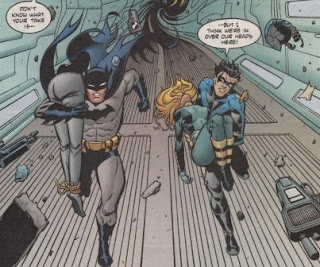 Batman and Nightwing make it to the roof of the prison just in time to use their grappling hooks to snare Blue Beetle's floating bug ship and pull themselves to safety.

It's just a moment's respite, however, as they still have the ever widening gravity well of the black hole to consider. It's not too long before the entire prison is sucked in, leaving a gaping, sucking hole in the ocean.

Black Canary begins to regain consciousness, and clues Batman into the fact that the Joker is more dangerous than ever before. He's dying of an inoperable tumor, so all bet's are off. 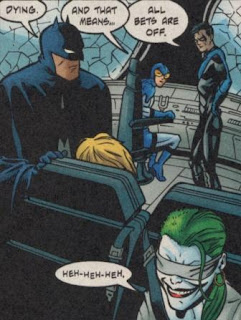 I think we learned that I obviously didn't give this series a fair shake back in 2001, as I really enjoyed this issue. It's not high art, nor does it attempt to reinvent the comic book format. What it does do, however, it does really well...and that's tell an entertaining super-hero yarn. At the end of the day, you can usually rely on Chuck Dixon for that much, especially when he's playing in the Batman books.

The story is pretty basic, as it's just a supervillain starting a riot and escaping form prison who ends up playing a cat and mouse game with Batman and friends. What makes this book entertaining is the little twist that Dixon and Beatty give to the Joker. His impending death gives an extra edge of unpredictability to his insanity that is going to be fun to see Batman deal with.

The real highlight of this book is the fantastic artwork of Marcos Martin. He's not inking himself here, and there are actually two different inkers on this issue, so the issue does look a little overworked in spots. It's missing the airy and simplicity of his later work that I'm used to, but don't get me wrong, this is still a beautiful issue.

One of the inkers is Mark Farmer, who meshes really well with Martin's pencils. He definitely softens up the linework a little, and there was actually a couple of times I thought I was looking at Alan Davis' work.

The fact that this issue is thirty pages means that we have a lot of good stuff to look at. More good stuff than I was able to work into the recap, as a matter of fact. Seeing as how Martin was the star of this issue, let's take another look at some cool panels that I couldn't work into my review earlier. 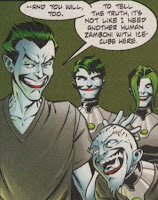 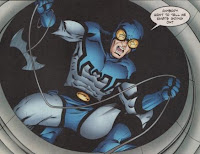 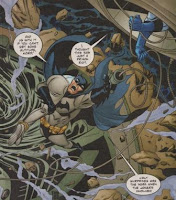 See? There was just too much good stuff there to let it go to waste.

It's issues like this that make doing this blog so much fun. I can pretty much tell you that I probably never would've gotten around to reading this issue if it wasn't randomly picked for me. If I can come across an unexpected surprise like this one every now and again, I'll be a happy blogger.


All characters and artwork reproduced are (c) DC Comics

Related links for your surfing pleasure...