I already mentioned on the previous post about how what I remembered most about this issue was the production values of Malibu comics. I sampled quite a few of their titles as they always looked good, but I never ended up sticking around for more than a few issues. The Night Man definitely falls into that pattern as I have a handful of issues from both volume one and volume two, but never more than a two or three in a row.

It's surprising, as they had quite a stable of artists on their titles. The Night Man alone, featured Darrick Robertson, Gene Ha, and Kyle Hotz at one time or another. Norm Breyfogle had a nice run on Prime, and some of their other titles boasted Terry Dodson, Howard Chaykin, George Perez, Aaron Lopresti, and Barry Windsor-Smith. Of course, if all it took was artistic talent to keep a comic line in production, we'd still be enjoying CrossGen books today.

I have no recollection of what the Night Man's powers were, or if he even had any for that matter. At first glance, he looks to be the Batman analogue for the Ultraverse, but that is just going solely by the cover image. And you know what they say about judging a book by it's cover, eh?

Let's say we stop farting around and dive right in to find out.

Who Is The Night Man? 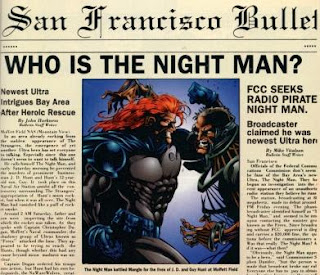 The cover boasts a banner that says "Jump On Now!", and true to form to help bring everyone up to speed, the first page features a reproduction of the local newspaper. The headline reads "Who Is The Night Man?", and to help answer that question there are several articles that recap the series to date. If you're going to do an info dump on the reader, this is a nice way to do it.

I read all of the fine print, so you don't have to, and what did I learn? I still don't know if he has any powers, but he does carry a gun and isn't afraid to use it. He also runs a pirate radio broadcast station. Pump Up The Volume meets the Punisher? 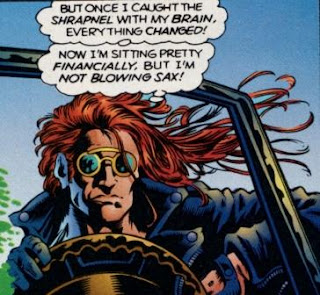 Apparently, the newspaper couldn't have come out fast enough, as the whole town is abuzz about who this new Ultra is. Chief among them is Johnny Domino, an aspiring jazz saxophonist, and the Night Man himself. As he drives around town, he recounts the recent events that led him here. A piece of shrapnel to the brain has granted him powers, which allow him to sense evil.

He's still brooding when he's approached by a beautiful woman named Rita Diamond. She's been hoping to catch up with Johnny, as her fiance is having a homeless benefit and she wants him to play his music at the ballroom. Looking to get out of his funk, he agrees in hopes that some jazz will lift his spirits. 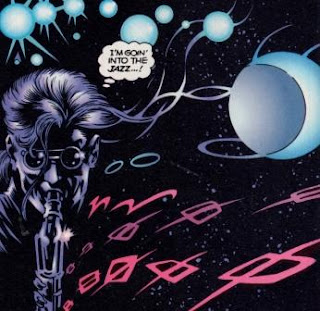 After his set, Rita introduces him to her fiance. Johnny takes a disliking to him, but when he tries to "hear" evil in him he comes up empty. The whole party is filled with choice characters apparently, as another person comes up to Johnny who he also dislikes. Their conversation is cut short however, as the lights go out in the ballroom, leaving everything in total darkness. 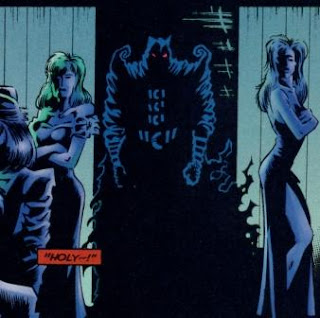 Another side effect of the shrapnel to the brain is that the Night Man can also see in darkness. It's not too long before he sees a mysterious form emerging from a hidden door in the wall. He rushes through the crowd, but there are too many people in the way to reach the hooded figure before he vanishes through a trap door in the floor. 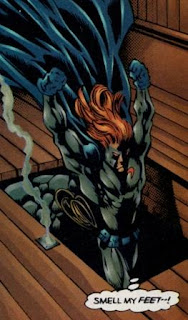 Still under the cover of darkness, Johnny rushes out to his car to grab his Night Man outfit that he has cleverly stashed in a secret panel between the trunk and the backseat. That sounds all well and good, but you can only get to the panel from the underside of the wheel well on the outside of the car. Not the most conspicuous of hiding spots.

Now donned in his full Night Man costume, he returns to the ballroom and opens the trap door with the help of his glove tasers. The trap door leads to an underground tunnel that would put Indiana Jones to the test. 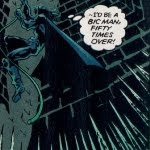 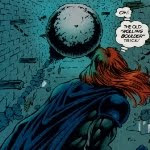 None of the death traps stop our hero, they merely slow him down on his way to the secret laboratory of the hooded figure. Bursting in, he finds the mysterious hooded woman has taken two women captive from the party and has them strapped onto a crude operating table. 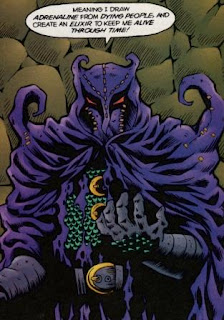 Don't look know, but I feel another premature villain ramble/manifesto coming on. It turns out this particular villain has stayed alive for forty-seven hundred years by using the adrenaline from it's victim in an elixir of life.

All of this is revealed to the Night Man, of course, as he is not expected to be leaving this room alive.

A tussle naturally ensues and it's a brutal back and forth as the two leave the laboratory in a shambles as they both try to gain the upper hand. In a final desperate move, the Night Man manages to unmask the villain to reveal it is none other than Rita Diamond! 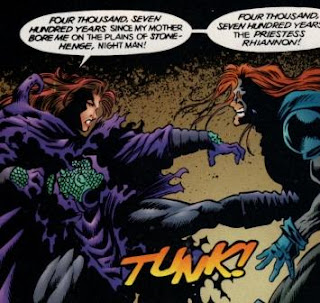 Her real name is Rhiannon, a priestess born on the rocks of Stonehenge themselves. She manages to get the drop on Night Man as he is distracted by the revelation of just who he is fighting.

And wouldn't you know it, at just the same, the adrenaline draining needles attached to the operating table have just begun to pierce the skin of the comatose young ladies lying underneath. The Night Man leaves Rhiannon to save the young girls, which gives her the opportunity to escape through a hidden door in the wall. As the door is closing she vows that they will meet again! 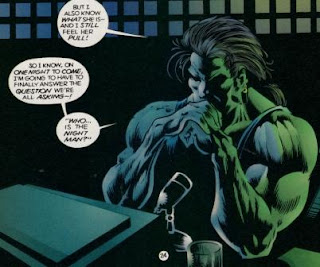 Later that night, Johnny has returned to his home and is back on the air on his pirate radio broadcast. There he confronts the question that seems to be on everyone's mind...who is the Night Man?

He promises that soon enough, he is going to be forced to answer that question for himself.

I hate to say it, but this book wasn't very good. It pains me to say it, as Steve Englehart holds a special part in my comic book history as we've discovered here earlier.

This issue was billed as a jumping on point, but all we really know at the end of it is that nobody knows who the Night Man is...including the Night Man! We have the barest mentions of his origin, but no clear reason for his motivation. His powers are vaguely hinted at, but never expanded upon. The villain is your standard immortal trying to prolong her life at the expense of others. I imagine that there's some history or connection between her and Night Man, but it's not explained here and their meeting comes across as rather coincidental.

The art by Kyle Hotz was a mixed bag as well, as I generally like his style but it seems like an odd fit on a title meant to be taking place in the shadows of the night. That, coupled with the garish color palette, didn't quite give me the sense of mystery and creepiness that I think the script was aiming for.

So I guess all of that explains why my collection of this title was so spotty. This is also the second issue that we've raided from my ebay longbox. One of these days, when I get some free time, I'll be putting those books up for auction to make space on my shelves. After reading this issue, I don't think there's going to be any last minute reprieves from the governor to put this title back in my collection.

All characters and artwork reproduced are (c) Malibu Comics

Related links for your surfing pleasure...
Posted by TomO. at 7:28 AM