So all of the recent travelling that I did for work did have one benefit for you, readers of Random Longbox.

What is it you ask?

Why, it's another installment of What did I see on the road the other day?

That's right, we had so much fun playing this game last time that I just had to bring it back for another go, right?

I'll take your silence as consent, so let's get down to it. And to make it easier to guess, I've turned the question into a poll...so vote away. You can always leave a comment with your guess as well, if you want to be contacted by the prize department here at Random Longbox headquarters in the case that you guessed correctly.

What did I see airbrushed on the side of a semi-truck last week?
UPDATE: Click over here for the correct answer.

Now that we've started the game show festivities, let's see what the next completely random book to review is. Take it away Randomizer... 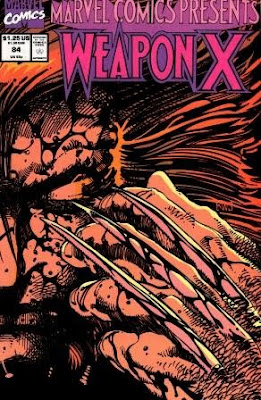 So it would appear that the 6 week long embargo on Marvel titles has come to an end. I can only assume that my threat to stop reading Marvel Comics until they cancelled the current direction of the Avengers titles has paid off. Your welcome.

The casual readers among you are probably rolling their eys, as we get yet another anthology title.

As for you Marvel-philes out there, you know this as the last issue of the Barry Windsor-Smith Weapon X origin storyline.

The casual readers among you are now probably thinking that this is the first time we've really come across Wolverine here at the Random Longbox, so why not have an origin-ish issue.

As for you Marvel-philes out there, you know that this story is challenging at best to understand.

I would imagine that most of this stuff presented here is still canon, but I'm so far out of the current Marvel continuity loop that I really have no clue. I do know that this story confused the hell out of an impatient, eighteen year old younger version of myself.

It sure did look pretty, though. Come back in a day or two for the review, and we'll see if I got any smarter in the intervening years or if the story just got hopelessly more convoluted.
Posted by TomO. at 9:57 PM