So I'm back. It's amazing how much a week away from your family, immersed in the company of "work" people, can throw off your mojo. Now that it's back, let's not waste anymore time looking backwards.

In fact, I'm so focused on getting the review for Asylum #2 done that I haven't cracked open a single new comic yet. And on a week with a new James Robinson penned Starman issue, that's no mean feat.

That's how much I love you guys! On with the show...

This is the one and only issue of this title that I have. I know next to nothing about it, other than it appears to be some sort of horror anthology. The reason it ended up in my collection is because it features a short story by Neil Gaiman and Mark Buckingham.

I think it's safe to say that I have every comic written by Neil Gaiman (that I know about) in my collection. To say that his Sandman opened my eyes to the strength of the comic book as a literary medium is an understatement, but that is more likely the topic for another day (say, when the Randomizer finally gets around to picking an issue of Sandman).

In an effort to keep this short (remember, I got an unread James Robinson Starman waiting for me), let's just get right to it.

Feeders & Eaters So there's two things that hit me right away with this story. The first is that Mark Buckingham is using a combination of watercolor painting and pencils that I don't ever recall seeing him use before. It's an interesting mix, and definitely adds to the creepy feel. 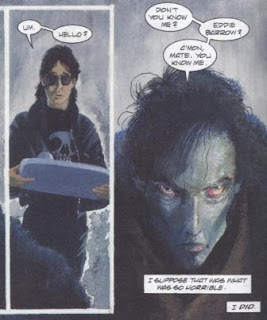 The second is that the main character is obviously drawn in the likeness of Neil himself. He's not the handsomest of fellows, so it definitely adds to the creepy feel.

I'm kidding, of course, as Neil and me go way back. I'm sure he remembers me from signing every one of my Sandman hardcovers over the years.

The story opens up with Neil in a strange city late at night. Having missed the last train out of town, he wanders into the first open business he finds, which happens to be a greasy spoon. Inside, he finds that one of the customers there knows him. Startled, Neil turns to see that it's an old acquaintance who has definitely seen better days. The old friend, Eddie, then begins to tell his tale of exactly what happened to him. He came to this city a couple of years ago and was renting a room in a big house with one other boarder, Miss Corvier. She was an odd old lady, but nice enough, as she used to leave him presents of vegetables and plants outside his door from time to time.

It wasn't until after he hadn't seen her, or any of her little gifts, for a while that he began to become concerned about her well being. He enters her room and finds her curled up in bed, weak and fatigued. She's hungry, and makes a request for food. It has to be meat, however, and raw meat at that. It seemed odd, but she has always done right by him in the past so off he went to the butcher.

Everything was fine for a while then, until the house cat went missing. Eddie was never a big fan of cats, so he really didn't care until he heard the cat late one night. It sounded distressed, like it was stuck in the rafters or on the rooftop, so off he then went to rescue the cat.

On the way up, he soon finds that the sound is actually coming from the old ladies room. Finding the door ajar, he nudges it open to see the cat lying on the floor, half digested but still alive. 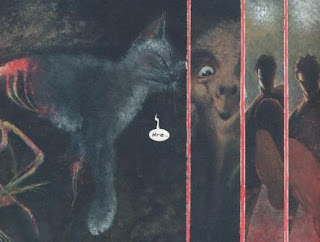 Startled, Eddie does the decent thing and puts the cat out of it's misery. His misery, however, is just starting as the old lady comes up behind him and starts to chastise him for killing her fresh meat. She's an old lady after all, and never wanted to be a burden on anybody, but how is she supposed to eat now?

Eddie's story is interrupted by a tapping on the diner window from outside. Eddie turns and excuses himself and says that he has to go now. Through the window, Neil can see him meet up with the old lady who was tapping on the window. As they turn to walk away, Neil gets a glimpse of Eddie's hand as it falls to his side. It's not much of a hand at all, with all of the skin and muscle eaten away, leaving only a bloody skeleton of a hand.

I guess we've found out how the old lady is getting her fix of raw meat now.

As the odd couple continue to walk away into the distance, Neil looks down and sees bits of flesh or dried blood on the tabletop where they were sitting. What happens next confuses me to no end, as Neil picks up one of the fleshy bits and eats it, then leaves the diner to finish his journey home.

Never invite Neil Gaiman to your house for dinner, as you never know what he's going to eat. I mean, seriously...dried fleshy bits? I was enjoying the story up until the last three panels, now I don't really know what to think, or even what the story was really about.

It started out as a standard Creepshow or Twilight Show type story, but took a turn to the surreal at the very end.

If you're a fan of Neil Gaiman it's still worth checking out. It's written in his unmistakable narrative style that does a wonderful job of taking the mundane and infusing it with bizarre elements of fantasy and other worldliness. The artwork from Mark Buckingham is also very good, and it's a real departure from the stuff I'm used to seeing from him.

There were also a couple of other stories in this book, including the Edgar Allen Poe poem that we looked at here. I'll touch upon each of them individually, but in the interest of time I'll make this real short.

Mass Grave is a story by Eric Dinehart and Justin Norman about a soldier in El Salvador whose conscience starts to get the better of him after taking place in one to many executions of rebel soldiers. He confides in a childhood friend, who happens to be a nun, in the hopes that she can help him relieve himself of the guilt. Later that night he's called upon for one more execution, this one to set an example for someone. That person is the nun who he talked to earlier. By confiding in her, he has damned her and himself. Now caught in a fever dream, the young soldier sees the bodies of his victims all around him. One reaches out to touch his forehead, and as their flesh touch we see the scene for what it really is. The gun of his superior officer is at his temple. He pronounces him a "traitor" and shoots him point blank. The soldier finally got his absolution, but paid the ultimate price.

The Knife of Jack The Ripper is the next tale. Marv Channing and Vincente Alcazar bring us a tale of the actual knife that Jack the Ripper used in his crimes. In modern day Scotland, a journalist has become fascinated with the legend. In his research he has fallen in love with the the great-granddaughter of the only woman to have escaped from Jack the Ripper alive. The journalist finds himself drawn to the knife, and eventually steals it. Possessed by the spirit of the Ripper, he orchestrates a masquerade ball with a Jack the Ripper theme so that he can complete the task that the Ripper left unfinished. Driven mad by what he has done, he turns himself in to Scotland Yard.

Finally, there's a nice little three page story about the dangers of QVC. Faye Perozich and Schaal tell a morality tale of greed and materialism in a story called The Shopping Club. Here, the devil is cast a smooth talking, shopping channel host. He talks directly to the heart of an old woman sitting alone in her apartment. Through the t.v. he offers her trinket after trinket. The woman has no money however, so the devil takes her memories from her in exchange. One by one they disappear along with her free will and her dignity. The devil wins again.

None of the other stories, save for maybe the last one, were of quite the same caliber as the Gaiman and Buckingham tale. Anthology titles live and breath on the strength of the whole package. I have no idea how long this title lasted for, but my guess is that it was short-lived.

I'd be curious to hear from anyone out there who remembers this title. Looking at comicbookdb.com tells me that there was only three issues of this series in total, which included some early work by Steven T. Seagle, John Bolton, and Pia Guerra, among others.

That's one thing these old anthology titles are always good for, and that's getting a peek at some early work from creators trying to break into the comic book business.
Posted by TomO. at 9:29 PM