From my first days of comic book collecting, Hawkeye has been one of my favorites. I've followed him from book to book, whether that was in The Avengers, West Coast Avengers, Solo Avengers, Avengers West Coast, or The Thunderbolts. Something about his roguish charm and effortless marksmanship, coupled with the fact that he never could catch a break, made him an extremely likable character. It's a shame he's not around anymore, but then most (if not all) of my Avengers have not fared very well in a post-Busiek/Perez world.

Now I feel like an old man complaining about how nothing NEW compares to the good old days. Come to think of it, I did have to walk uphill in three feet of snow to get my Avenger's books back in the day, so maybe I'm not so crazy after all...

So yeah, Hawkeye's a favorite. Still, it's probably been 20+ years since I've read this mini-series. I remember looking for other Avengers mini-series after reading The Vision & Scarlet Witch and realizing that they had an even older mini-series that took place before their maxi-series. The fact that it's been so long since I've read it means that I don't actually remember that much about what happened in it. The only memory that stands out is that this is the series where he and Mockingbird fall in love.

One last thing to note, and that is the penciler on this issue. It's obvious that I bought these back issues before I started paying attention to who the creators involved were, as I had no idea that Mark Gruenwald used to draw as well as write. He's definitely known for his writing skills now, but here he is pencilling the exploits of my favorite archer. It's going to add a whole new dimension to reading this story, so let's get to it.

Their celebrations are short-lived, however, as they spot Hawkeye and Mockingbird on the ground among the spectators who are watching the apartment building become engulfed in flames. Determined to kill the heroes, Bombshell and Oddball decided to try again, this time letting Oddball take the lead. 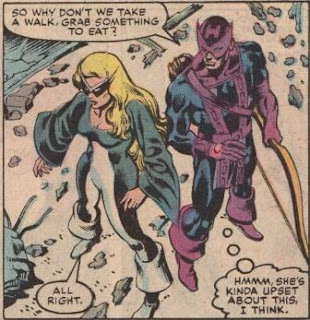 Gee Hawkeye, I wonder what your first clue was? Could it have been the complete and utter destruction of all of Mockingbird's worldly belongings? I'm just spit-balling here, but she may need just a tad more sympathy right about now.
Since they can't do much while the firemen extinguish the flames, Hawkeye and Mockingbird head out to grab a bit to eat. After the building has been secured, Hawkeye and Mockingbird return to look for clues about the explosion. It was a pretty thorough job, as nothing of Mockingbird's has escaped destruction. It's therefore a little odd, when Hawkeye finds an 8-ball lying undamaged on the floor. A clue! 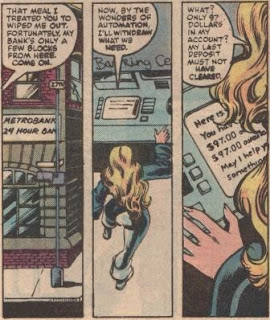 Geez Hawkeye, what a set of stones! Everything that Mockingbird owns in the world just got destroyed, and you still made her treat for dinner? And you're taking her last $97?

After spending most of her money on new arrows for Hawkeye, the two decide to continue their investigation into Cross Technologies. It seems that the company is closing in on completing their oh-so-cleverly named "death device", so it's up to Hawkeye and Mockingbird to stop them before their hired hitmen can finish them off.

Now pennyless (did I mention that Mockingbird spent her last $97 on new arrows for Hawkeye? What is it about the "bad-boy" that makes women lose control?), the two take the subway uptown. There they run into Captain America in his civvies. Out to prove that he can handle things on his own, Hawkeye turns down Captain America's offer of help.

As they exit the subway Hawkeye is surprised by seeing another 8-ball, this time rolling on the floor towards him. He looks up to see Oddball taunting him from around the corner. 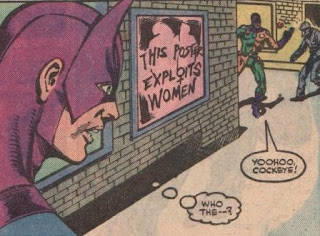 That's some pretty cutting edge political commentary in an early-80's comic book on that poster. Way to go Gruenwald!

Giving chase, Hawkeye and Mockingbird race to confront their pursuers. Doing their best to dodge the onslaught of billiard ball sized projectiles, Hawkeye takes a direct hit to the wrist, causing it to go numb.

Proving her super-hero bona fides, Mockingbird uses her battle-staves to swat away the incoming missiles with ease. That gives Hawkeye a chance to regain his composure and the chase in on again.

While Hawkeye tries to catch Oddball, Mockingbird is ambushed by Bombshell, who was disguised as a nun. She blasts Mockingbird in the back with an incendiary charge, but finds out that she was only playing possum to draw Bombshell within striking distance. It's not the wisest of gambits, as guns work just as well at point blank range and Mockingbird takes a direct hit from Bombshell's wrist gauntlets.

Farther up the subway station, Hawkeye and Oddball continue their game of cat and mouse. Oddball jumps aboard a train as it is pulling away, leaving Hawkeye to make a mad scramble to catch the rear gate of the departing subway car. Inside the car, Oddball has taken a hostage as Hawkeye enters. 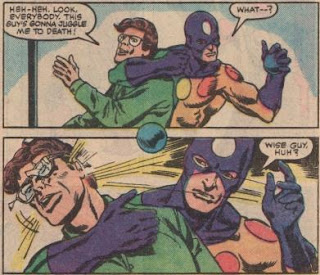 No joke required, as the hostage takes one for the team by supplying his own.

Back to the chase, and Oddball has now jumped up into the rafters of the next station house. The epic battle of arrows versus spheres continues.

Which actually brings up an interesting point. Whose bright idea was it to make Oddball one of Hawkeye's villains? You do realize we're talking about a hero who fires shafts going up against someone with specialized balls? Sometimes "a cigar is just a cigar" and all, but I'm just saying...

Hawkeye's injured wrist is still giving him problems, so he pulls out the old bola arrowhead and lashes Oddball's arm to a nearby girder. 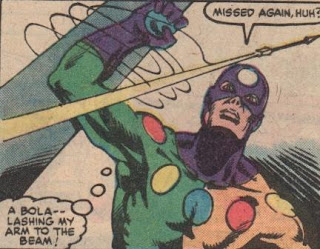 That is definitely some kinda trick arrow. Who knew the laws of physics were so easily suspended.

Finally having the upper hand, Hawkeye is just about get Oddball to spill his guts about who has hired them when he is hit from behind by a concussive projectile. It's Bombshell, and she's back to save Oddball's backside after taking down Mockingbird.

The two then leave the subway station with an unconscious Hawkeye and Mockingbird in their custody.

The big takeaway with this issue was that Mark Gruenwald wasn't a half-bad penciler. Some of the figures are a little stiff, and the backgrounds are a tad on the sparse side, but the storytelling and pacing are pretty solid. And if you can't have it all, I'd take the latter over the former any day.

The story, on the other hand, was a little on the light side. It's basically one big fight scene, interspersed with some rather obvious and over-scripted character developments. I don't have a whole lot of issues by Mark Gruenwald in my collection, but that seems to be a common trait in the few that I have read. Maybe I just haven't read the right Gruenwald stories, so one of these days I'll have to get around to reading Squadron Supreme and some of his earlier Cap stuff.

Good thing I was already a fan of Hawkeye when I finally got around to reading this story, as the Hawkeye charm was largely vacant in this issue. Although this series did give us the beginning of the Hawkeye/Mockingbird relationship, so there was at least one good thing to come out of it.

All characters and artwork reproduced are (C) Marvel Comics

Related links for your surfing pleasure...
Posted by TomO. at 10:13 PM