I gave Doctor Strange a lot of leeway in the 90’s, collecting this title up until it got knee deep into the Midnight Sons crossover, by which point it was near unreadable. The mid 90’s was not a kind period for the good doctor, as it seemed like there were more company wide crossovers and tie-ins happening than not. I’ve always preferred Dr. Strange working on the periphery of the Marvel universe, and all of the constant line-wide events seemed to draw him closer and closer to the mainstream superhero shenanigans.

There were, however, a couple of highlights. I remember Mark Buckingham’s run with Warren Ellis and J.M. DeMatteis that closed out this series as being really good. Too bad it didn’t set the sales charts on fire, as the title was cancelled within 10 issues.

The other interesting run was the twenty or so issues when Geof Isherwood was doing the artwork. I don’t remember the stories being especially strong or memorable, but the artwork was good. Geof eventually took over writing chores from Roy Thomas, but it was clear by that time that the title was in decline. It was only a matter of time before Marvel would do something drastic...enter Midnight Sons.

This particular issue is early on in Geof Isherwood’s run, and appears to be a filler issue featuring Wolverine. I’d like to say I remember something about it, but with all of the Wolverine guest-stars happening around this time, they all just sort of blur together.

A Wolverine At The Door It’s the middle of the night, and all is quiet in Dr. Strange’s Sanctum Sanctorum. Everything, that is, except for the basement where a familiar three clawed fist bursts from the floor. Pulling himself up, Wolverine makes his way upstairs into the private quarters of Stephen Strange and Clea. With a mindless stare, he begins to slash and hack at the sleeping sorcerers. 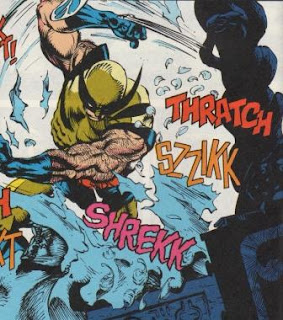 Make sure that your guests know that no powers are allowed in any pillow fights!
The master of the mystic arts, however, will not be surprised so easily in his own house. Floating above the bed, Dr. Strange uses all of the usual Seraphims, Hoggoths, and Agamottos to deduce that Wolverine is more than likely possessed by the N’Garai. Knowing that they will have anticipated Dr. Strange responding with magic, he decides to fight Wolverine with the martial arts skills that he learned from Wong, in an attempt to take Wolverine by surprise.

Always have plenty of opportunity for dancing!
Proving that she is more than mere arm-candy, Clea throws an enchanted silver dagger to Stephen, which he uses stab Wolverine. Out of the wound seeps the evil essence that was controlling him. Dr. Strange uses a Scarlet Sphere of Cyttorak to trap the essence, and with the Eye of Agamotto, he sees it’s true form...The Undying Ones!

If you’re unfamiliar with the Undying Ones, Dr. Strange goes into a three page monologue about who they are. I’ll spare you the recap and give you the bullet points instead. Dr. Strange and The Defenders defeated the Undying Ones previously, but a new Nameless One know leads them. They plan on using the magical doorways called Sa’arpools to kill Dr. Strange and conquer our dimension. Now let’s get back to the action.

Dr. Strange devises a plan to shut the Sa’arpools permanently with a crystal shard containing the essence of the earth goddess Gaea, but it’s only going to work from the other side. That means that he and Wolverine are going through the doors to the world of the Undying Ones. 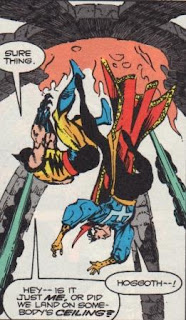 When sneaking out of the house after your parents are asleep, always make sure you sneak out of a ground floor window!
When they regain their footing in the monstrous dimension, Dr. Strange begins the incantation that will seal the gates for good. Before he can utter the final syllable, they are are attacked by a horde of Nameless Ones. The deomons manage to knock the crystal shard from Strange’s hand, and both it and Wolverine sink into a lake of green muck.

Wolverine fights the Undying Ones as they descend to the bottom of the muck, but they regenerate as quickly as he dispatches them. Overwhelmed, Wolverine swallows some of the muck which has the effect of transforming him and bringing out his wilder persona. 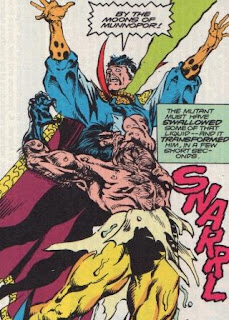 Keep your party drug free, as they can quickly turn a fun party into a dangerous one!
In his berserker rage, Wolverine attacks both friend and foe alike. Strange manages to struggle free and locate the crystal shard. Uttering the final syllable of his spell, the shard begins to seal the doorways and purge the demonic influence from Wolverine.

With the demons momentarily incapacitated, thanks to Wolverine and his demonic fury, they decide to make a hasty retreat through the dimensional doorway before it seals completely. Using Dr. Strange’s Cloak of Levitation, they escape just as the Undying Ones awake and give chase. Alas, the demons just aren’t quick enough as the gate completely seals behind Strange and Wolverine, just as they make their way through. 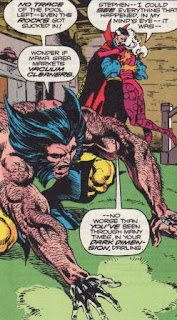 Be a courteous guest, and always make sure to help the host clean up afterward.
After inspecting the dimensional doorway to make sure that they are permanently closed, they decide to end the night with a drink or two. Surprisingly enough, Dr. Strange doesn’t stock beer at the sanctum santorum, but he does have some 12th century Prussian brandy that he’s been saving for a special occasion. Wolverine agrees, proving that maybe you can teach an old berserker new tricks.

Never show up unexpectedly for a slumber party at Dr. Strange’s house, as you never know what dimension you’ll end up in. Although as a silver lining, you could do worse than kicking back when all is said and done with some 800 year old brandy.

As a filler story, this issue was mildly entertaining. I could live a happy life without ever reading another Wolverine story, but I know that’s probably not going to happen. There was really no compelling reason that this story demanded that Wolverine be in it, so I’m sure it was a sales driven decision. And who can really blame Marvel for that, when Wolverine was raking in the cash, clawed-hand over clawed-fist.

Geof Isherwood’s art was good, if a little rougher than I recall. I don’t ever remember seeing his work again after he left this title. It’s a shame, as I think his work would really shine with some state of the art coloring and production techniques.

The only real clunky part of the story was the massive continuity info-dump that Roy Thomas gives us to explain who the Undying Ones are and what their connection to Wolverine was. Honestly, if you need to bring the story to a screeching halt to try to desperately convince us that Wolverine really is integral to this particular story, you’ve probably already lost that battle.

All in all, it’s a decent enough little filler story, but at the end of the day it’s still just filler.

All characters and artwork reproduced are © Marvel Comics

Related links for your surfing pleasure...
Posted by TomO. at 11:19 PM