The cover to this issue is relatively generic, so it doesn't trigger any immediate memories as to what we are in for. The post Age of Apocalypse era of the x-universe has since become a giant blur as far as what I remember. I do remember one highlight of Cable from that era was when James Robinson and Ladronn took over the title. Unfortunately, we missed reviewing one of those as Robinson would take over with the next issue, and Ladronn a couple after that.

There is one small silver lining, however, as the cover blurb lets us know we are in for a peek into the Askani'son aspect of Cable's future-past. I've never really been a huge Cable fan, but I've always had a soft spot for the mythology that they created for his future. It seemed that during the 90's, characters from the future were a dime-a-dozen. The Askani always were a tad more fleshed out, so I never did mind seeing it addressed. It was definitely a more entertaining and original future world than the one that Bishop would come from.

One last item of interest before we start reading, and that is the fact that this issue features (a pre-K.) Brian Vaughan on script assist. I knew that he had worked in the mutant corner of the Marvel Universe before, I just had no idea that he did so before 2000. Just out of curiosity, I checked my database and I also have a Wolverine issue co-written by Dezago and Vaughan from 1998. That issue I remember vividly, as it was pulled for containing a Jewish racial slur. Although honestly, I didn't even realize it was there when I read it initially.

Broken Soldiers The story opens up in a rather mysterious monastery in the Swiss Alps. It is there, that members of the Askani tribe from the future are waiting and plotting for the right time to make Cable embrace his destiny as the Chosen One. 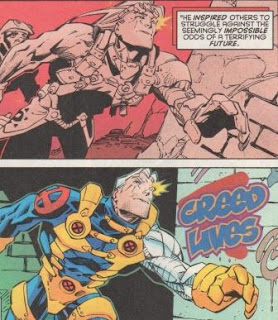 While they wait, the elder teacher begins to tell an important tale of Nathan Dayspring Summers' formative years in his dystopian future.

Parallel to that is a story of Cable in the present, fighting the good fight.

In the future, Nathan is leading one of his rag-tag band of rebels away from some pursuing New Canaanite's. They only get so far, when one of his soldiers gets pinned down in the crossfire. He orders the rest of his men to continue on to safety, while he will stay behind and rescue their comrade by himself. Deathwish much?

In the present, Cable is on hand while a rampaging mob of bigots chase down a suspected mutie. He confronts the mob as they bear down on the young boy. Just as he begins to lecture them about tolerance, they all start writhing in pain and clutching the sides of their heads. 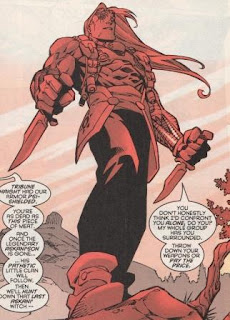 Back to the future, and Nathan has caught up with the soldiers just as they are about to execute his friend. Standing before them, he attempts to use the mysteriousness of his being the Chosen One on the soldiers and scare them off.

They don't buy it, so he relies on the old chestnut that is "you're surrounded by my fellow rebels hiding in the hills." Needless to say, they don't buy that one either. Unlucky for them, however, Nathan's compatriots disavowed his orders and came back to help him. The New Canaanite's are gunned down in short order.

While Nathan talks to his second-in-command and apologizes for not relying on his fellow soldiers, one of those soldiers is off in the distance beating the crap out of one of the surviving New Canaanites. 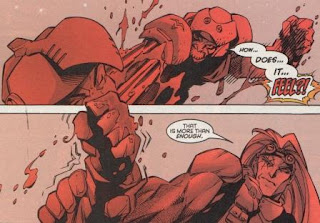 Coincidentally enough, back in the present, Cable confronts the young mutant who now has his pursuing mob writhing in pain with visions of demons and monsters haunting their consciousness. 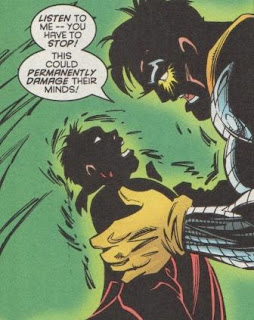 We get a glimpse over the next couple of pages of the wisdom of Cable, and why he is a natural born leader and teacher. He is able to make his fellow soldier realize that by killing their enemies in cold bold, they are no better than Apocalypse. In that instance, Apocalypse wins as his methodology takes hold.

In the present, Cable teaches the young mutant about power and responsibility. The hate that the young boy is feeling right now is human nature, but with the love and guidance of family, they can be overcome and make you a better man. 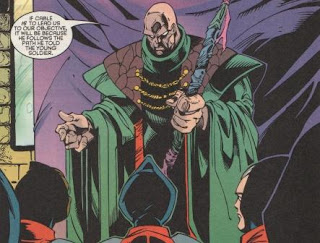 His story over, the Askani teacher tells his young acolytes that they must emulate the Askani'son and not let their anger be surrendered to the hatred.

Cable has obviously been re-reading his Amazing Spider-Man Omnibus since he arrived in our present, as he pretty much parrots Uncle Ben directly in talking to the young mutant. But it's a good lesson to learn, so who can blame him.

In all seriousness, this is a decent little filler story, but that's just about it. Filler stories, by their very nature, don't really drive the narrative forward much. This one takes the opportunity to tell a morality play, taking advantage of Cable's time travels to tell the same story from two different periods in his life, covering two different millenia.

The script is serviceable and does what it sets out to do in an economical twenty pages. If there is one downside, it's in the art department. There are two pencillers this issue with Randy Green handling the future stuff, and Chap Yaep handling the present day. Yaep's pencils are the rougher and less refined of the two, and the story of the young mutant suffers for it.

Randy Green's pencils are actually quite nice. They're a little cartoony for what I expect on a Cable title, but they work. The coloring of the future tale, however, leaves a lot to be desired. In attempting to separate the narrative, they have colored it in just shades of red and it doesn't really add anything to the story.

So if you're looking to jump feet first into some good 90's issues of Cable, I'd suggest starting with the James Robinson/Joe Casey era that starts next issue. While this issue was decent, only the Cable complete-ists are really likely to care.

All characters and artwork reproduced are (c) Marvel Comics
Posted by TomO. at 8:21 PM