I honestly can’t remember if I used to like Darkhawk back in the day, or if I just bought it after getting caught up in the collector’s fever of a “hot” new character. I have the first two years worth of issues in my collection, so there must have been something I liked.

Thinking back, however, all I can recall are the things that bugged me. Like his grappling claw gauntlet, that while an obvious Wolverine influence, always seemed too gaudy and awkward. Or the melodramatic family that always seemed to fall into more wells than Timmy.

Let’s stop there before I get myself too negatively biased before I read the issue. After all, it’s not like there are any shortages of Darkhawk as punch line blog posts out there already.

This particular issue is part 6 of 6 of the “Heart Of The Hawk” storyline, so we're going to have to do our best to get up to speed in a very short time. 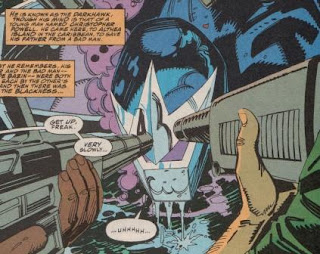 And right off the bat we pick up with Darkhawk in a precarious situation as he has several rifles pointed right at his head. It’s the local gendarmes of some third world island nation, and it would appear that Darkhawk’s mission to find his father has not gone smoothly at all. As the soldier is gloating over the capture of Darkhawk, he explains to him that his father’s corpse has washed out to sea. Knowing that nothing more can be done here, Darkhawk realizes that he must escape and get back to his family in New York.

Normally, a bunch of militia would be no problem for him, but his amulet that powers his suit was recently torn from his chest by Tombstone. One stray bullet, and his suit won’t be able to heal him.

Never fear, however, as this is Darkhawk’s book after all and he does manage break away from the soldiers. He heads for the airstrip and manages to use his grappling hook to snag on to a airplane that is taking off. Once on board, the pilot happens to be a fan and agrees to fly him back to New York. 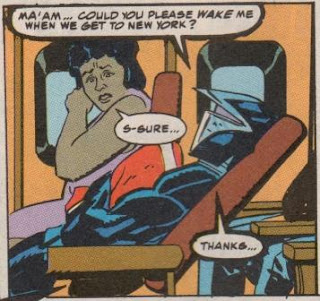 …you’re big getaway involves flying coach!
Now safely back in New York, the hole in Darkhawk’s chest where the amulet usually sits starts to tingle. He deduces it must be trying to reach out to the amulet, and decides to follow it. The amulet, meanwhile, is with Tombstone as he is consulting a psychic in a bid to try to get the amulet to work for him. 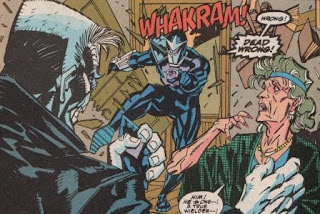 It doesn't take Darkhawk long to find him, as he bursts into Madam Rose’s studio and an epic back and forth game of hot potato ensues with the amulet. Darkhawk eventually gets the better of Tombstone with the help of some conveniently placed high voltage wires. Like in any good comic book, there’s always some around when you need them.

Reunited with the amulet, Darkhawk attempts to change back to his secret identity, but to no avail. He’s still trapped inside the armor with no way out. Worried that he’s going to die soon, he decides to sneak into the hospital to check up on his gravely injured brother. 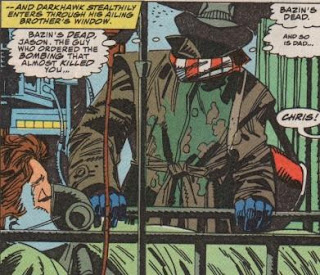 …your idea of a stealthy disguise involves a “Where’s Waldo” scarf and a trenchcoat that looks like you lost your lunch.
While in the hospital in his awesome disguise, his other younger brother informs him that while he was gone his Mom has gone missing too! How child protective services has not stepped in and intervened yet is beyond me. A deathly ill brother, a creepy brother in a sick-stained trenchcoat, a missing mother…yeah, seems relatively normal.

Back out on the streets, it doesn't take Darkhawk long to track down where his mother is being held captive. The same crooked police officers who turned on his father have her held at gunpoint. She tries to reason with them, when they are interrupted by a knock on the door. Obviously, it must be the pizza man, or not… 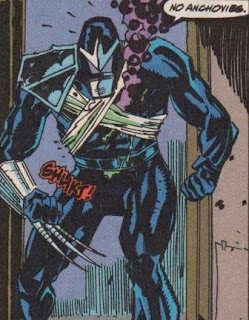 …your best ad-libbed catchphrase is “No anchovies”?

…you’re still relying on your mom to fight all your battles!
After tying up the crooked cops for the real police, Darkhawk collapses from exhaustion in a nearby alley. Trying not to black out, his thoughts return to his father and all that he has left of his is his old notebook. In it, his father explains how he got involved with the crooked cops and let an innocent woman die. While rereading the notebook, Darkhawk makes a startling discovery!

The notebook doesn’t end with the death of the innocent woman. After an accidentally blank page, the notebook goes on to reveal that his father went back for the woman and didn’t let her die. He also planned on turning on the cabal of cops after they started to get too extreme with their crime fighting methods. His father wasn’t a crooked cop after all, but an honorable man caught up in a situation way over his head.

With just three pages left to wrap everything up, Darkhawk suddenly manages to tap into his amulet power again and is able to change back to his secret identity of Chris Powell. Back at the hospital, his brother awakens from his coma. His whole family is now reunited once again, with the new found knowledge that their dad and husband died an honorable man.

Seeing as how his dad gave the ultimate sacrifice trying to make the world a better place, Chris realizes that he must continue on as Darkhawk to carry on his father’s dream.

SO, WHAT DID WE LEARN…

This issue honestly wasn’t as bad as I imagined it was going to be. Yeah, I had a little fun at Darkhawk’s expense, but we kid the ones we love.

Well, “love” is probably too strong a word. How about we kid the ones that we are forced to read by a random number generating program.

Much better…that practically rolls right off the tongue.

Danny Fingeroth brings the whole origin story to a conclusion that while ultimately satisfying, does seem a little rushed in the final pages. It did, however, instantly bring back memories of one of the main faults that I had with this book, and that was the supporting cast. For some reason I was never able to emotionally connect with his mother and brothers. Fifteen issues of family drama were just too much.

Mike Manley’s pencils are pretty good, but not as cool as I remember them from the time. He seemed to have a couple of pretty high-profile gigs back in the day, but the pencils here haven’t aged too terribly well.

So if you’re still reading this review, I know that there is one giant question that remains unanswered…is the series still in the ebay-ready box? Sadly yes, but that’s good news for someone out there who has some extra space in the “D” section of their longboxes.

All characters and artwork reproduced are © Marvel Comics

Related links for your surfing pleasure…
Posted by TomO. at 11:09 PM