It's time's like this when I begin to believe in fate more than coincidence.

The randomizer has spoken, and it has chosen The Avengers #138! 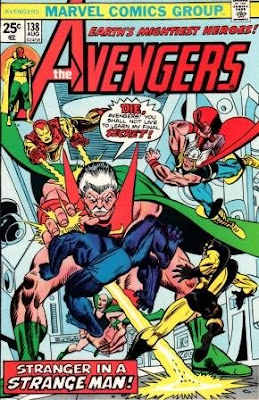 So what was it about this issue that has challenged my scientific belief in coincidence over fate!

Out of all of the 12,000+ comics it could have chosen, it picked the very first back-issue I ever bought when I started collecting comics.

I remember it like it was yesterday. My friend at the time had just returned from a vacation in Pennsylvania. He brought back two new obsessions with him. The first one was Iron Man comic books, and the second was albums by the band The Hooters. I obviously took a liking to the comics, but The Hooters...not so much.

Anyway, later that week I went to the comic book store with him and decided to pick up some books of my own. Iron Man seemed relatively cool, but I didn't want to copy so I went with The Avengers since he was in that book as well. I remember buying The Avengers #265 off of the stand, and going back to the back issue bins and finding the oldest one I could afford, which was #138.

It's been years since I've read this issue, so I'm looking forward to this one.
Posted by TomO. at 8:58 AM

Email ThisBlogThis!Share to TwitterShare to FacebookShare to Pinterest
Labels: Avengers