Its actually been a long time since I've read this issue, so I can't tell you too much about it from just my memory. Looking at the cover, I'm sure there's some horribly contrived situation involving Superman and the parachuting Houdini that involves some overly complicated switcheroo that was commonplace during this time period. We'll get to the nuts and bolts of the story in a bit, but there's actually something else about this issue that makes it stand out (at least to me).

This very issue of Action Comics is the one that was on the stands when I was born! Now I'm no fool, and I'm sure that bit of information is entertaining for one or two people tops (and I don't even know if my mom reads my blog), but what is fun is checking out the books from your own birthday. Thanks to Mike's Amazing World of DC and his Time Machine, it's as easy as clicking a couple of links.

So while you go check that out, I'm going to get on with seeing whether or not Superman can save that little boy's father. Just promise to come back here after checking out your own birthday.

Superman Meets Super-Houdini! High up in the sky, the citizens of Metropolis are being treated by a show of super-human proportions. No, it's not Superman...been there, done that. This time it's Hairbreadth Holahan doing a promotional stunt for his upcoming performance.

With his son working the crowd down below, Holahan struggles to break free from his chains so he can pull his chute before he hits the ground. But seriously, this is Metropolis and Superman is bound to show up to make sure that no one goes splat. 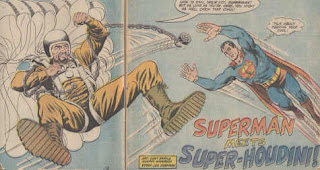 Fortunately for Superman, the only thing going splat is his sense of being needed as old Hairbreadth has made good his escape at the last instant. Back on terra firma the Holahans finish their promotional pitch, managing to get an invite from Superman himself to appear at the Metropolis Museum Fundraiser that he's hosting next week.

So was Superman really in awe of their abilities? Did they really manage to pull one over on him? Naaahhh, as a quick look with the old x-ray vision revealed their secrets. 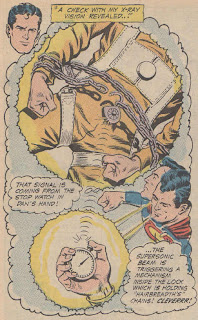 Hey! Watch where you're pointing those x-rays, Superman!
Little does Holahan know, however, that his performance also caught the attention of the local crime syndicate in Metropolis. These guys are nothing if not thorough with their bureaucratic paperwork. Something looks familiar about this Holahan guy and a quick check of their files reveals that he's actually Mace Larkin, an escaped con who forged a new identity as an escape artist in an attempt to turn over a new leaf. They soon pay him a visit backstage at the fund raiser and coerce him into helping them break their boss out of prison, or else they tell Superman the truth about his past life.

Holahan reluctantly agrees, and the show continues with Superman using his heat vision to seal him inside a medieval suit of armor. No one could ever possibly defeat Superman's heat vision, right?

Wrong! It's only moments later that Holahan emerges from behind a curtain, free of the armor. The celebrations are short lived, as an alarm rings out through the museum as someone has stolen the Star of Asia Diamond that is also on display. Superman theorizes that it must have been Holahan who swiped it during his escape, and he soon finds out the truth...Hairbreadth Holahan is none other than escaped convict Mace Larkin! 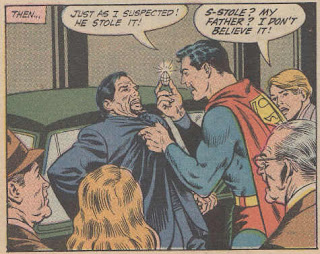 Now inside a prison cell, Larkin is soon up to his old tricks as he's already working on way to bust out. Pulling a fake tooth from his mouth, he reveals it's actually a capsule containing a cyrogenic hyper-chemical which he uses to freeze the bars and make them brittle enough to shatter.

Taking Stoney Croy with him, the mob boss he's here to break out, they take to the sewers and are soon on their way to the old mob hideout.

I love the fact that Metropolis gangsters are a bunch of sentimental fools at heart!
Unfortunately for the assembled gangsters, the celebration is short lived as Superman reveals that Mace Larkin is actually Superman in a rubber mask!

Yes, that's right! It's all been an elaborate scheme of cross and double-cross as Larkin went right to Superman after being found out by the gangsters originally. They then worked up this plan to catch the gangsters at their own hideout! For his part in helping catch some of Metropolis' most wanted, Larkin is granted a full pardon for his past crimes, ready to resume his life as a reformed criminal.

Aside from the obvious lesson about redemption, we also got treated to a look at exactly how the switcheroo went down earlier in the issue. The experienced Silver Age readers out there probably caught this, but here's a peek behind the scenes for the sake of everyone else. 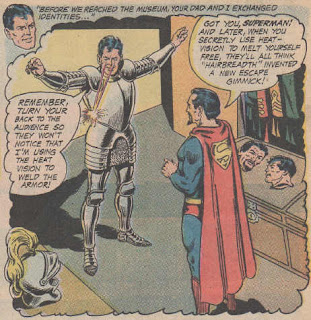 You can scroll back up and scope out the original panel of "Superman" sealing "Larkin" inside the armor to see how it played out at the time. Here's a free tip for you, it's always a good idea to pay close attention to the perspective of the action when you know something fishy is going on.

Now if that wasn't enough Superman action for you, we're treated to another story in this issue. It's a short little morality play concerning social justice and disparity, and it's so over the top and melodramatic that it needs its own post to truly do it justice. Come back tomorrow for "The Day Superboy Became Superman!"

Related links for your surfing pleasure...
Posted by TomO. at 9:49 PM