I love me some good Doctor Strange. Unfortunately, for as long as he's been around there's been a lot more chaff than wheat. Luckily for us, that Randomizer gave us a heaping helping of the good stuff. This was Doctor Strange's first self-titled series, and the first couple of dozen issues are some of my favorites.

The icing on the cake? The first half a dozen of those featured some truly epic art by Frank Brunner. There are three people that tackled the good doctor, that in my opinion are the holy trinity of Doctor Strange artists. Steve Ditko set the stage for Doc and his world in the Silver Age. Frank Brunner then came on and amped things up for the Bronze Age. And for the Modern Age, it doesn't get any better than Jackson Guice. That right there is about all you need as far as Doctor Strange is concerned.

The best of the crop from the 70's run are the issues that verged on the trippy. This issue falls squarely in that category as Doc is trapped in the Orb of Agamotto, fighting for his astral life while his body lies mortally wounded in the real world. The main protagonist for this particular story is the less than threatening Silver Dagger, but he's sidelined for the most part, as Strange desperately searches for a way out of the Orb.

Let's not waste any more time talking about it, and read it already...

A Separate Reality And for those of you coming in late to the party, here's a recap of what happened last issue, right on page one. 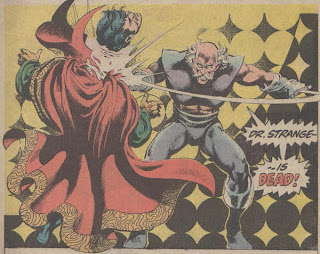 So maybe the Silver Dagger stabbed him in the back instead of beheading him, but the dramatization is for the benefit of Clea who was taken prisoner by Silver Dagger last issue. It's his hope that seeing her beloved mistreated in this fashion, will break her spirit. Clea may be new to the realm of sorcery, but she's no dummy. She knows that if anyone can defeat the Silver Dagger, it's Doctor Strange.

Speaking of Doctor Strange, let's check in with him within the realm of the Orb of Agamotto. 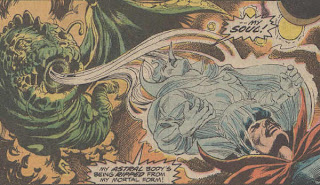 Yikes...a winged, soul sucking space worm! Good thing Clea can't see this, as her confidence in Stephen would be sorely tested as his soul gets sucked up and swallowed whole.

What she doesn't know, is that Doc is about to get some help from some unlikely allies. First among them? The Silver Surfer. 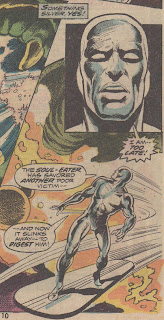 So while the Surfer thinks he has arrived too late to save another victim of the Soul-Eater, what he doesn't realize is that the victim was Doctor Strange. Even without a mortal body, he is far from defenseless. Attacking the central nervous system of the creature, he manages to get himself vomited back to what passes for reality inside the orb.

Curiously, the Surfer does not recognize Doctor Strange. Since they've been team mates for the last two years, that can only mean that the Orb is pulling images from Doc's mind and making them manifest in its realm to interact with him. Their first task? Find his body, which has decided to go on a bit of a walkabout after having the soul sucked from it by the Soul Eater.

Following it's rambling footprints, they trail the mortal shell to a strange castle. What's even stranger is what they find inside the castle. 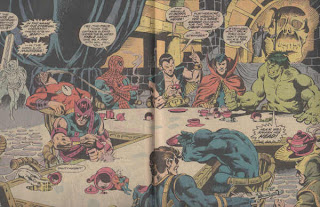 All right all you heroes, it's time to get crazy drunk on some off the Hulk's tea. And you don't turn down a cup of Hulk's tea, as that would make him angry...and you wouldn't like him very much when he's angry.

Reunited with his body, Doctor Strange is willing to throw caution to the wind and not only refuse Hulk's tea, but decides to leave the party early as well. Bad move, Doc. 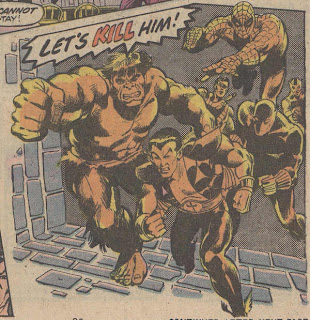 Doctor Strange manages a spell or two of obfuscation that has the Defenders attacking phantom versions of himself. That leaves them wide open for a whammy of a spell that knocks 'em all unconscious, right as the Soul-Eater returns. 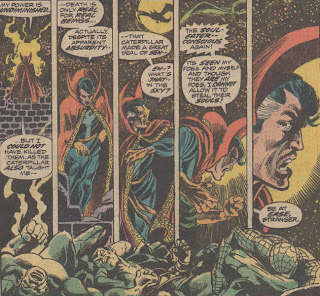 Luckily for Doctor Strange, not all of orb-created manifestations were quite as reactionary. With the help of the Silver Surfer and Valkyrie, they deduce that the Soul-Eater will keep on coming as Doc is the only one in the orb with an actual soul. To save himself, he must confront death itself at the center of the orb. Only then will he be able to free himself and return to the mortal world to save his beloved Clea.

With Valkyrie's winged horse as his guide, Doctor Strange closes out the issue heading right for the center of the Orb of Agamotto...sure of himself, and his actions, for the first time in a long time. 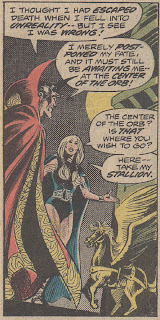 First and foremost, never turn down tea with the Hulk. If he doesn't get his regular dose of caffeine, look out!

Do you think he favors green tea or gray? I guess it depends on what his skin color at the time is. Do they have red tea?

Steve Englehart and Frank Brunner craft a well done tale, putting Doctor Strange through a series of challenges where he must use his mind in a world where the reality is a warped version of his memories. It allows just the right amount of trippyness, while giving him plenty of foes to battle, both familiar and bizarre.

I always love a good Doctor Strange story where he's essentially fighting himself, or manifestations pulled from his consciousness or powers, and this one doesn't disappoint. The use of the Defenders as visualizations of the superhero world as seen through the twisted lens of the Orb is the perfect meta-commentary on the team itself. Strange, bizarre, and seemingly thrown together at random with nothing but a vague sense of camaraderie (or Hulk's tea) holding them together.

Frank Brunner's artwork is just as good as I remember, truly shining when he gets to let loose with dimensions and perspective inside the surreal world of the Orb. It's a shame that we only got five or six issues with him on the art, but it's a testament to his talent that they loom so large in my memory.

All in all, this was a heckuva book and definitely one of the highlights of the Bronze Age. I only wish that they could capture this sense of what makes a good Doctor Strange story and apply it to today's Doctor Strange.

Related links for your surfing pleasure...
Posted by TomO. at 7:27 AM