James Robinson was a creator who could do no wrong in the 90's. From his three part Batman: Legends of the Dark Knight story with Tim Sale, to WildC.A.T.S., Grendel Tales, Starman, and The Golden Age, he amassed one of the best resumes of he 90's. One of my favorites, however, was a title he ultimately left unfinished, Leave It To Chance.

The premise is pretty straightforward, though the setting is not. At least it wasn't in a pre-Harry Potter world. The title follows the adventures of Chance Falconer, the only daughter of famed paranormal investigator Lucas Falconer. All she wants is to follow in her father's footsteps, but the overprotective father is reluctant to allow her in. That just gives the headstrong girl opportunities to get herself into all kinds of problems as she tries to prove herself to her father.

The setting is a city called Devil's Echo, which inhabits a world were monsters and magic go hand-in-hand with the regular mundane aspects of our universe. That gives the Falconer family plenty of mysteries to solve, but unfortunately we only ever got thirteen issues before the book was left unfinished.

I don't remember the specifics of this issue, but judging by the cover it looks like we're in for some zombie fun. Hopefully we're not all to burned out on zombies to have a little fun with this issue.

Dead Men Can't Skate Tragedy has struck the sporting world of Devil's Echo, as the star hockey player that is leading the Ice Demons to their first Stanley Cup championship has just turned up murdered! A week goes by as their 3-0 lead slowly dwindles away to a 3-3 tie with the final game sold out. Lucas Falconer has managed to use his connections to get some box seats. It doesn't take long, however, for him to be pulled into another mystery as another player has turned up missing during the middle of the game.

Lucas' friend from the police force approaches him to help with the case. He's unsure, as this doesn't seem paranormal, but Lt. Saunders reassures him that that's not entirely true.

Back from the dead is the first murdered player, Raepher McDougal. The people smiling in that panel are the father and son owners of the Ice Demons, who with the return of their star player, just saw their chances for the championship resurrected along with McDougal.

The unhappy looking chap is the owner of the other team, who can't seem to find the designation in the rulebook that states that a player must be alive to play. So the second period gets underway with a rejuvenated crowd cheering the Ice Demons on.

Back in the stands, Lucas explains to Chance that he has to go help find the other missing player. She and her pet dragon want to help, but her father will not hear any of it. 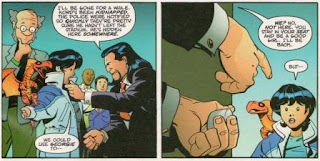 Chance and her dragon sneak back to the locker room, where she hopes to pick up the missing player's scent for the dragon to track. While they are in the locker room, they find Will Bendix, a local reporter, already sniffing out the story for himself. The pool their resources as Georgie has picked up the scent and flies out of the locker room. 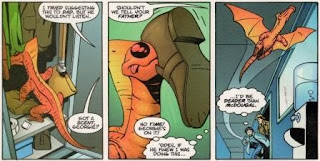 It's debatable whether Chance has a knack for finding trouble, or trouble has a knack for finding her, but either way she soon ends up right in the thick of things as she comes upon one of the owners of the Ice Demons sneaking around above the suspended scoreboard over center ice. Georgie has led them straight to him, as has the missing player tied up.

It would appear that he has bet against his own team, even going so far as to murder their star player to ensure that they lost. His plan went bottom up with the McDougal back from the dead, and that forced him to improvise with kidnapping the second player.

Just as he is about to drop the hockey player and Chance down onto the ice, Will jumps from the shadows to fight the two big goons that are doing the owner's dirty work for him.

Seeing as how scoreboards weren't meant for this type of action, it soon comes loose from it's moorings, spilling the two troggs who killed McDougal onto the ice. After getting a hat trick while the fight was going on, he now has a chance to personally check the two that were responsible for his death into the the boards and into unconsciousness.

All's well that ends well, as the Ice Demons win their championship and the man responsible for the McDougal's murder is arrested. 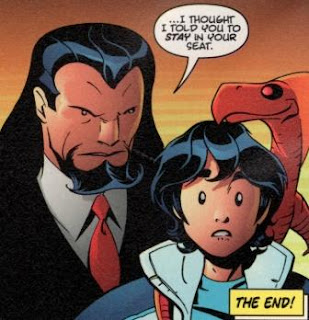 Everything, that is, except for Chance, who is now in trouble with her father for not listening to him.

It’s good to know that this series holds up the level of quality that I remember it having, as it’s been a while since I reread one of these. In fact, it’s been so long, I now have a kid of my own. While a four year old is probably a little young to enjoy this book yet, I did find myself thinking that it will definitely be a good book to share with him when he starts reading.

This ends up being one of the few books that claims that it can be enjoyed by both kids and adults, and I’d have to say that this one’ll probably be able to pull it off. It’s lighthearted enough that the violence and situations are never too over the top, but tense enough to have just the right amount of excitement.

The world these characters inhabit is a wonderful blend of heroics and fantasy, and you never know what can happen next. It makes for some great stories that allow the creative team to really let loose and go wherever their talents take them.

And speaking of talents, the artist for this series was Paul Smith. He really cleaned up and simplified his already one-of-a-kind style to present what I think is some of his best stuff. He was the artist for the first Uncanny X-Men that I ever bought off the stands, so I always have a bit of soft spot for his work, but I would probably trade my entire Uncanny collection to get more issues of Leave It To Chance drawn.

I’m sure now that close to ten years have gone by, that that’s just not going to happen. It’s a shame, as books this good deserve a longer run. I’m thankful for what we do have, however, and with James Robinson back in the comic book frame of mind...you never know.

All characters and artwork reproduced are (c) James Robinson and Paul Smith
Posted by TomO. at 9:31 PM