Well, that's the last time the use the word "lazy" in a blog post title. Unfortunately, I've been anything but. Life goes on, however, and the internet community of comic book fandom can now function at top speed once again, as we take a long delayed look at The Avengers #35!

In the interest of getting right into the action, let's take a quick recap of what we know going into this issue. It's smack dab in the middle of Busiek's superb run, featuring fill-in art by soon to be regular Avengers penciller, John Romita Jr.

That's the good. The bad?

It's part of a crossover I have limited memory of, featuring a cast of Avengers that's decidedly b and c-list. You know when you have Moondragon and Photon duking it out for the second most powerful member of the team, things are a little off.

Even so, Busiek was able to do wonders with a bunch of d-listers when he wrote The Thunderbolts, so it would be a mistake to right this issue off before we sit down to re-read it.

Interstellar Intrigues This issue opens up with Thor and a group of fellow Avengers demanding to speak to Lilandra, Majestrix of the Shi'ar. After a few tense moments with Thor on the verge of losing his godly patience, the Avengers are escorted in to see Lilandra. 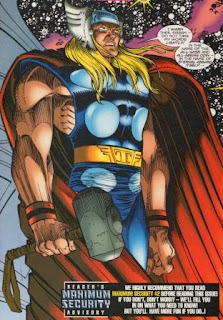 We don't get too much info as to what exactly is going on, but we are told that this issue will probably make more sense if we read Maximum Security #2 first. They also claim they'll fill us in on the way if we didn't, so I guess we'll put 'em to the test.

Once inside the inner chambers, its Moondragon's turn to lose her temper as she demands to know why Lilandra and the Intergalactic Council have quarantined the Sol System and have begun transporting undesirables to Earth's surface. Lilandra explains that yes, Earth has been made a prison planet for the universe's most undesirable inhabitants.

It's actually a pretty clever idea as the Earth's heroes will work to keep the prisoners contained, while the prisoners will force the heroes to focus on Earth and not have the time to get drawn into cosmic affairs every other issue.

Proving that bureaucracy knows no boundaries, Lilandra explains that since this was decided in council there is nothing more that can be done...but, Lilandra has been friends and allies with Earth's heroes before, so she agrees to give them a forum to bring up an appeal. In the meantime, they are dismissed.

Back in their quarters, the Avengers take a few moments to strategize their next move. Thor talks of raising the armies of Asgard to fight on the humanity's behalf, when Moondragon senses that they are being spied upon.

She reaches out with a psychic bolt and soon incapacitates the alien eavesdropper. Before they have a chance to interrogate the Ruul spy, they are beset by more attackers. 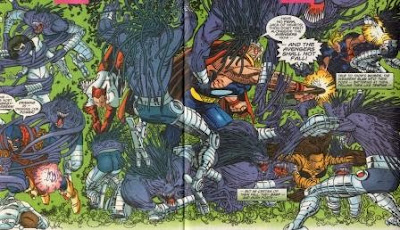 Realizing that these aliens will never let them plead their case before the council, they decide to make their way to the council chambers immediately. All the way there, they are attacked by more and more Ruul. One by one, the Avengers are taken down, with Thor the last one to fall.

As consciousness returns to our heroes, they find themselves restrained and taken prisoners by the Ruul. Now if you're like me, you're probably wondering who the hell are the Ruul? 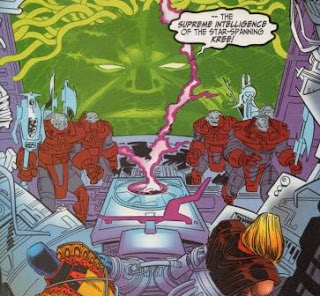 Luckily for us, the Supreme Intelligence of the Kree appears before the captive Avengers to fill us all in! Most of the next three pages are filled with flashbacks that recaps Avengers Forever and explains how the Supreme Intelligence was able to use the Forever Crystal from that series to evolve the Kree race by more than a millennia in but a moment. Now almost unrecognizable after their forced evolution, the Supreme Intelligence sends them back out into space to involve themselves in intergalactic affairs masquerading as a new race, instead of the war-like Kree that everyone knows and loves hates.

Using their newfound influence, the Kree have pushed the Intergalactic Council to make Earth a prison planet. All of that was just a cover for the Supreme Intelligence to impregnate the Earth with the Ego-Spore, that will slowly transform Earth into Ego, The Living Planet! With the power of their own planet to control, the Kree will once again be unstoppable in their conquest of the galaxy.

And with that, the Supreme Intelligence disappears once again, secure in the knowledge that the Avengers will soon be dead and his plans for conquest will soon come to fruition. 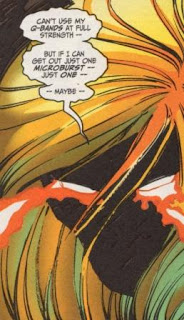 Realizing that the Earth's days are numbered, Quasar summons every ounce of will power that he has left to send the smallest microburst of energy back to Earth in an attempt to warn the other Avengers.

The other Avengers have problems of their own, however, as they've just been commandeered by the Federal Authority under the command of U.S.Agent!

The Maximum Security storyline, while not making too big of an impression on me originally, sounds like an original idea for a mini-series event. Reading this issue has made me curious enough to pull out the series proper, and give it another read.

The art in this issue featured a guest appearance by John Romita Jr. Now I have a hot/cold relationship with his work, depending on what the project is. I don't normally go for his style on straight-forward superheroics, and this issue falls squarely in that vein. It was interesting to see his take on the Avengers, even though we didn't get to see too many of the big guns. It was kind of disappointing that Thor was the star of this issue, as JRJR spent a long time drawing his title around this time. I think I would have preferred to see him tackle a Captain America or Hawkeye story.

I suppose I won't have long to wait on that score. Less than 24 hours now, by my count!

All characters and artwork reproduced are (c) Marvel Comics
Posted by TomO. at 10:55 PM